Attacking the Symptoms instead of the Disease?

The aspect of the immune system was the poor cousin to acquired immunity for decades, but has recently graduated to a much higher status because of its relationship to inflammation.

Attacking the Symptoms instead of the Disease?

The aspect of the immune system was the poor cousin to acquired immunity for decades, but has recently graduated to a much higher status because of its relationship to inflammation. Many of the processes involving macrophages and other innate immunity cell types lead to inflammation. Inflammation is known to be the underlying contributor to almost every chronic human disease known, including arthritis, Crohn’s disease, diabetes, heart disease, Alzheimer’s disease, and stroke. It has recently been shown that inflammation is also linked to cancer.

Cancer begins with a series of genetic changes that leads to cells overreplicating and then progressing to a stage where cells break off and set up new cancerous colonies at other sites. However, the stages in development are controlled by many factors, and researchers are now realizing that invasive cancers require cells of the innate immune system. These cells normally come to our rescue to protect against damage and disease, but in cancer they can be subverted for the good of the tumor and the ill of the patient. 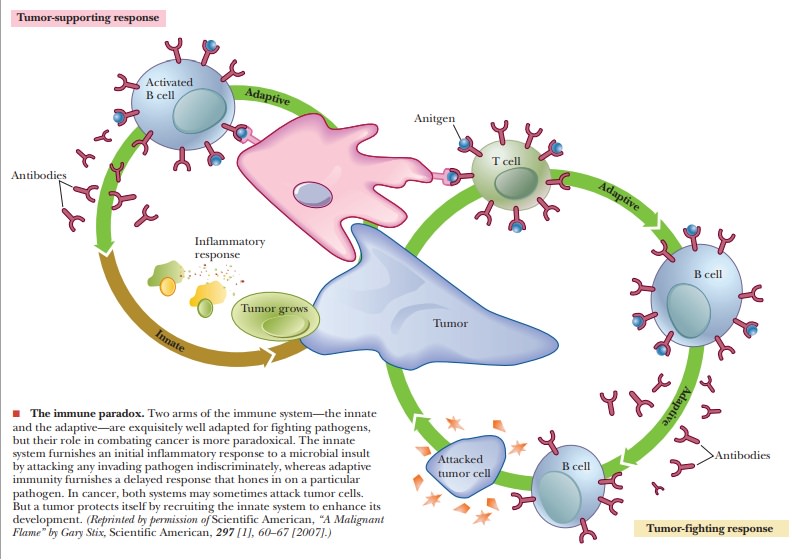 As shown in the figure, cells of the innate system can be both beneficial and detrimental to the fight against cancer. As antigen-presenting cells, dendritic cells or macro-phages stimulate T cells and B cells, which lead to an attack on a tumor cell. However, they also lead to an inflammatory response that leads to tumor growth through production of cytokines and growth factors. The evidence indicates that the inflammation sur-rounding macrophages encourages the conversion of precancer-ous tissue to full malignancy.

This realization has led researchers to question the dogmatic search for a cancer cure. Perhaps more time and money should be spent on treating the symptoms. Although no cure for AIDS has been found, much progress has been made in increasing the life span and quality of life of people with AIDS. Cancer researchers have always looked for cures, but if they can treat the inflammation symptom, then they might be able to stop the progression of the disease, essentially turning cancer into a manageable long-term disease. Patients rarely die from the primary cancer; rather they die from metastasis. Current research is looking at drug therapies including simple use of nonsteroidal anti-inflammatory drugs (NSAIDs), such as aspirin, more selective inhibition of prostaglan-din E2, and specific inhibition of cytokines such as IL-6 and IL-8.