The Immune System: Distinguishing Self from Nonself 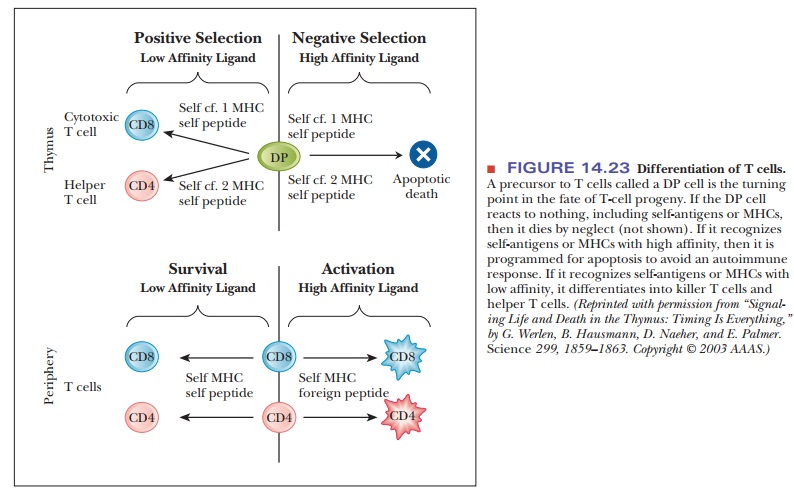 With all the power the immune system has to attack foreign invaders, it must also do so with discretion, because we have our own cells that display proteins and other macromolecules on their surfaces.

Distinguishing Self from Nonself

With all the power the immune system has to attack foreign invaders, it must also do so with discretion, because we have our own cells that display proteins and other macromolecules on their surfaces. How the immune system knows not to attack these cells is a complicated and fascinating topic. When the body makes a mistake and attacks one of its own cells, the result is an autoimmune disease, examples of which are rheumatoid arthritis, lupus, and some forms of diabetes.

T cells and B cells have a wide variety of receptors on their surfaces. The affinities for a given antigen vary greatly. Below a certain threshold, an encoun-ter between a lymphocyte receptor and an antigen is not sufficient to trigger that cell to become active and begin to multiply. These same cells also have stages of development. They mature in the bone marrow or the thymus and go through an early stage in which receptors first begin to appear on their surfaces.

In the case of T cells, a precursor form called a DP cell has both the CD4 and the CD8 protein. This cell is the turning point for the fate of its progeny. If the receptors of the DP cell do not recognize anything, including self-antigens or self-MHC proteins, then it dies by neglect. If the receptors recognize self-antigens or MHC but with low affinity, then the cell undergoes positive selection and dif-ferentiates into a killer T cell or a helper T cell, as shown in Figure 14.23. On the other hand, if the cell’s receptors encounter self-antigens that are recognized with high affinity, it undergoes a process called negative selection and is pro-grammed for apoptosis, or cell death. 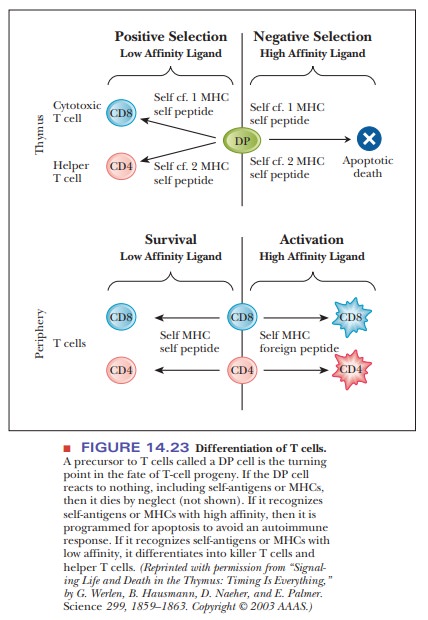 By the time the lymphocytes leave their tissue of origin, they have therefore already been stripped of the most dangerous individual cells that would tend to react to self-antigens. Some individual cells will still have a receptor with very low affinity for a self-antigen. If these slip out of the bone marrow or thymus, they do not initiate an immune response because their affinity is below the minimum threshold, and there is always the requirement for a secondary sig-nal. They would need to have another cell, such as a macrophage, also present them with an antigen. In the case of B cells, besides binding an antigen to its receptor, it would need to receive an interleukin 2 from a helper T cell that had also been stimulated by the same antigen.

All of these safeguards lead to the delicate balance that must be maintained by the immune system, a system that simultaneously has the diversity to bind to almost any molecule in the Universe but does not react to the myriad proteins that are recognized as self.