An oncogene is a gene that has been implicated in cancer.

An oncogene is a gene that has been implicated in cancer. The root word, onco, means “cancer.” In 1911, a scientist named Peyton Rous demonstrated that solutions taken from chicken carcinomas could infect other cells. This was the first discovery of tumor viruses, and Rous was given the Nobel Prize in 1966 for his discovery. The virus was called the Rous sarcoma virus, and it was the first retrovirus shown to cause cancer. The gene that was specific to the cancer is called v-src, forviral sarcoma.This gene encodes a protein that causes transformationof the host cell into a cancer cell. Thus, the gene was given the name oncogene. The protein was called pp60src, which stands for a phosphoprotein of 60,000-Da molecular weight from the sarcoma virus (src).

However, it was later found that the sequence of the gene was very similar to that of a normal gene in eukaryotes. These genes are called proto-oncogenes. Many proto-oncogenes are normal and necessary for proper growth and devel-opment in eukaryotic cells. However, some transforming event causes the proto-oncogene to lose control. Sometimes this is due to a viral infection. In other cases, the event that causes a proto-oncogene to become an oncogene is not known. Table 14.2 shows some proto-oncogenes implicated in human tumors. Many of these genes are involved in signal-transduction pathways that affect the transcription of genes that speed up cell division. We looked at the control of transcription in eukaryotes and noted that many signaling pathways were routed through the CBP/p300 coactivator (see Figure 11.23). One of these pathways involved mitogen activated protein kinase (MAPK) and a transcription factor called AP-1. To understand the nature of many of the oncogenes shown in Table 14.2, we must take another look at this pathway. 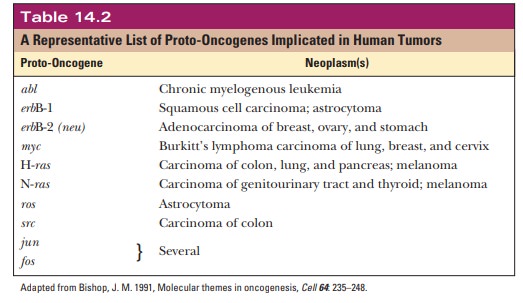 The process starts when an extracellular signal binds to a receptor on the cell membrane (see Figure 14.25). This receptor is a tyrosine kinase that dimer-izes, and then each part phosphorylates the other. Once phosphorylated, the receptors are bound by an adaptor molecule, a protein called GRB2 (pro-nounced “grab two” ), which has a phosphotyrosine binding domain that is very similar to a domain found in the pp60src protein. The other end of GRB2 binds to a protein called Sos. 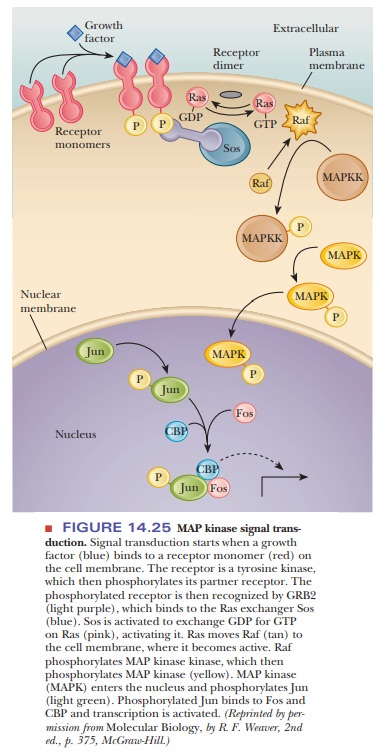 At this point, there is an interaction with a very important 21-kDa protein. This protein, called p21ras or just Ras, is involved in about 30% of human tumors. The designation Ras comes from Ra t sarcoma, the original tissue in which it was discovered. The Ras family of proteins are GTP-binding proteins.

In their resting state, they are bound to GDP. After the cell signal, the Sos replaces the GDP for GTP. Intrinsic hydrolysis of the GTP returns the protein to its inactive state, but this process is slow. Proteins known as GTPase-activating proteins (GAPs) speed up this hydrolysis and are involved in the control of the Ras proteins. GAPs inactivate Ras by accelerating the hydrolysis of GTP. Oncogenic forms of Ras have impaired GTPase activity and are insensitive to GAPs, thus leaving them bound to GTP, which causes them to stimulate cell division continually.

Although Ras mutations have been some of the most-studied mutations leading to cancer, we can see that Ras is found rather early in the process that ultimately leads to cell division. Activated Ras attracts another protein called Raf, which then phosphorylates serines and threonines on mitogen-activated protein kinase kinase (MAPKK). As one can guess from its name, this enzymethen phosphorylates mitogen-activated protein kinase (MAPK). This enzyme enters the nucleus and phosphorylates a transcription factor called Jun. Jun binds to another transcription factor called Fos. Together, Jun and Fos make up the transcription factor that we saw before called AP-1, which binds to CBP and stimulates the transcription of genes that lead to rapid cell division. As we can see in the table, jun and fos oncogenes code for these proteins. In 2002, researchers screening 20 different genes in 378 cancer samples found that the Raf gene was mutated in 70% of the malignant melanoma samples.