What characterizes a cancer cell? What causes cancer?

Cancer is one of the leading causes of death in humans, leading to 1500 deaths per day in the United States alone. It is characterized by cells that grow and divide out of control, often spreading to other tissues and causing them to become cancerous. Some estimates suggest that a third of all humans will get cancer during their lifetimes, so it is clearly a disease that is important for everyone to understand. However, the older a person gets, the more likely he or she is to get cancer. A 70-year-old is about 100 times more likely to get cancer than a 20-year-old.

What characterizes a cancer cell?

All life-threatening cancers have at least six characteristics in common, and multiple problems must occur in a cell before it becomes cancerous. That may be why, even though cancer is common, most people still grow to old age and not get cancer. First, cancer cells continue to grow and divide in situations in which normal cells do not. Most cells must receive a growth-chemical signal, but cancer cells manage to keep growing without such signals. Second, cancer cells continue to grow even when the neighboring cells send out “stop-growth” signals. For example, normal cells stop growing when compressed by other cells. Somehow, tumors manage to avoid this. (Figure 14.24 shows a tumor cell expanding and squeezing against neighboring tissue.) Third, cancer cells manage to keep going and avoid a “self-destruct” signal that usually occurs when DNA damage has occurred. Fourth, they can co-opt the body’s vascular system, causing the growth of new blood vessels to supply the cancerous cells with nutrients. Fifth, they are essentially immortal. Normal cells can divide only for a finite number of times, usually in the 50–70 range. However, cancer cells and tumors can divide far more than that. The sixth characteristic is the most lethal: Although cells that exhibit the first five characteristics can be a problem, the fact that cancer cells have the ability to break loose, travel to other parts of the body, and create new tumors makes them lethal. This process is called metastasis. Stationary tumors can often be removed by surgery. However, oncea cancer starts spreading, it is almost impossible to stop. Of every 10 deaths due to cancer—including a high percentage of lung, colon, and breast cancers—9 of them are due to cancers that metastasized. 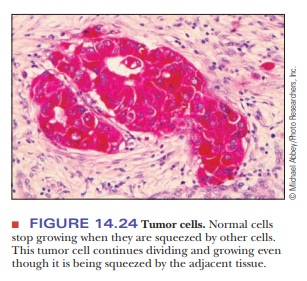 One often hears of many things that cause cancer. Smoking causes cancer. Radiation causes cancer. Asbestos or grilling meat causes cancer. However, these things cannot truly be the ultimate cause, although they may play a role. The real cause may be a combination of insults to the cell that leads to it turning malignant. Cancer is ultimately a DNA disease. It has its roots in changes in the DNA inside a cell. Somehow these changes cause the loss of control of division and the other characteristics described above.

The changes in the DNA cause changes to specific proteins that are respon-sible for controlling the cell cycle. Most mutations of DNA affect two types of genes. The first is called a tumor suppressor, a gene that makes a protein that restricts the cell’s ability to divide. If a mutation damages the gene for a tumor suppressor, then the cell has lost its brakes and divides out of control. The sec-ond type of gene, called an oncogene, is one whose protein product stimulates growth and cell division. Mutations of the oncogene cause it to be permanently active. Scientists are still looking for changes to genes that are direct causes of cancer. So far, more than 100 oncogenes and 15 tumor-suppressor genes have been linked to cancer. Current research involves compiling databases of all the known DNA sequences that are found to be mutated in many varieties of cancer. This approach has identified about 350 cancer-related genes. The task now is to pare this number down to the mutations that are important to the development of the disease, because it is probable that many of these mutations are coincidences rather than causal.