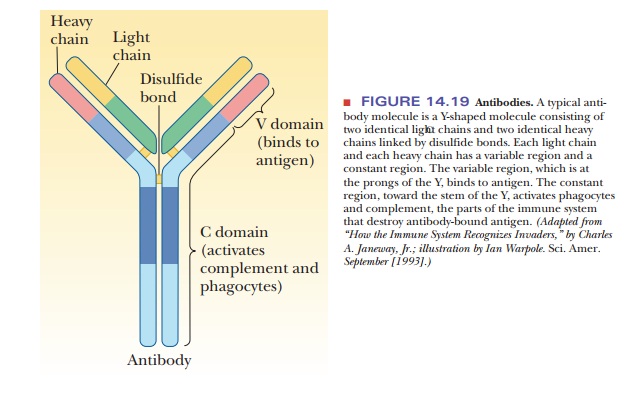 What are antibodies? Antibodies are Y-shaped molecules consisting of two identical heavy chains and two identical light chains held together by disulfide bonds.

Antibodies are Y-shaped molecules consisting of two identical heavy chains and two identical light chains held together by disulfide bonds (Figure 14.19). They are glycoproteins, with oligosaccharides linked to their heavy chains. There are different classes of antibodies, based on differences in the heavy chains. In some of these classes, heavy chains are linked to form dimers, trimers, or pentamers. Each light chain and each heavy chain has a constant region and a variable region. The variable region (also called the V domain) is found at the prongs of the Y and is the part of the antibody that binds to the antigen (Figure 14.20). The binding sites for the antibody on the antigen are called epitopes. Most antigens have several such binding sites, so that the immune system has several possible avenues of attack for naturally occurring antigens. Each antibody can bind to two antigens, and each antigen usually has multiple binding sites for antibodies, giving rise to a precipitate that is the basis of experimental methods for immunological research. The constant region (the C domain) is located at the hinge and the stem of the Y; this part of the antibody is recognized by phagocytes and by the complement system (the portion of the immune system that destroys antibody-bound antigen). 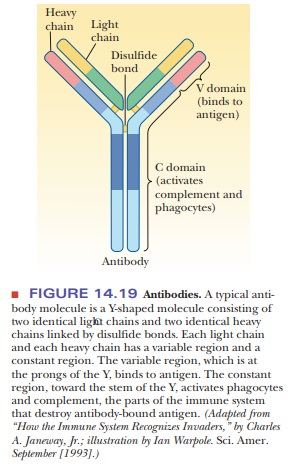 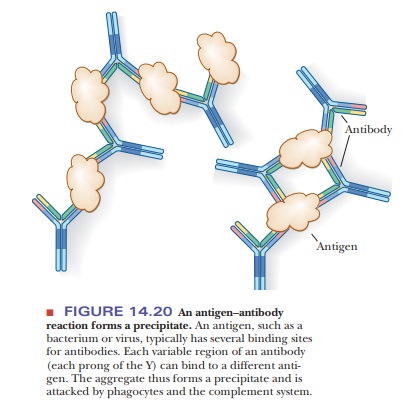 How does the body produce so many highly diverse antibodies to respond to essentially any possible antigen? The number of possible antibodies is virtually unlimited, as is the number of words in the English language. In a language, the letters of the alphabet can be arranged in countless ways to give a variety of words, and the same possibility for enormous numbers of rearrangements exists with the gene segments that code for portions of antibody chains. Antibody genes are inherited as small fragments that join to form a complete gene in individual B cells as they develop (Figure 14.21). When gene segments are joined, the enzymes that catalyze the process add random DNA bases to the ends of segments being spliced, allowing for the wide variety observed experimentally. 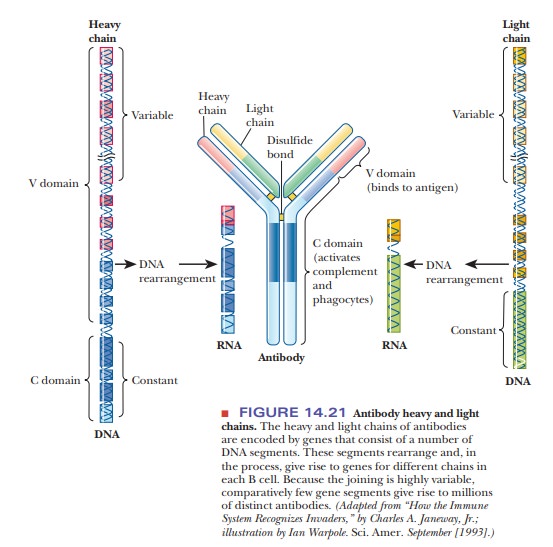 This rearrangement process takes place in the genes for both the light and the heavy chains. In addition to these factors, B lymphocytes have a particularly high rate of somatic muta-tion, in which changes in the base sequence of DNA occur as the cell develops. Changes outside the germ cells apply only to the organism in which they take place and are not passed on to succeeding generations.

Each B cell (and each progeny plasma cell) produces only one kind of anti-body. In principle, each such cell should be a source of a supply of homoge-neous antibody by cloning. This is not possible in practice because lymphocytes do not grow continuously in culture. In the late 1970s, Georges Köhler and César Milstein developed a method to circumvent this problem, a feat for which they received the Nobel Prize in physiology in 1984. The technique requires fusing lymphocytes that make the desired antibody with mouse myeloma cells. The resulting hybridoma (hybrid myeloma), like all cancer cells, can be cloned in culture (Figure 14.22) and produces the desired antibody. Because the clones are the progeny of a single cell, they produce homogeneous monoclo-nal antibodies. In this way, it is possible to produce antibodies to almost anyantigen in quantity. Monoclonal antibodies can be used to assay for biological substances that can act as antigens. A striking example of their usefulness is in testing blood for the presence of HIV; this procedure has become routine to protect the public blood supply. 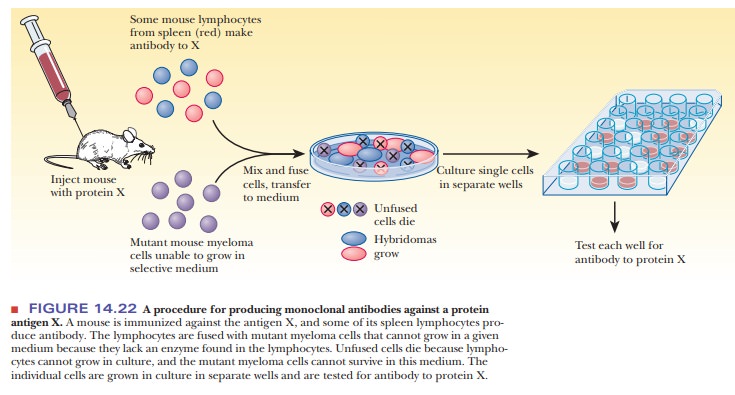