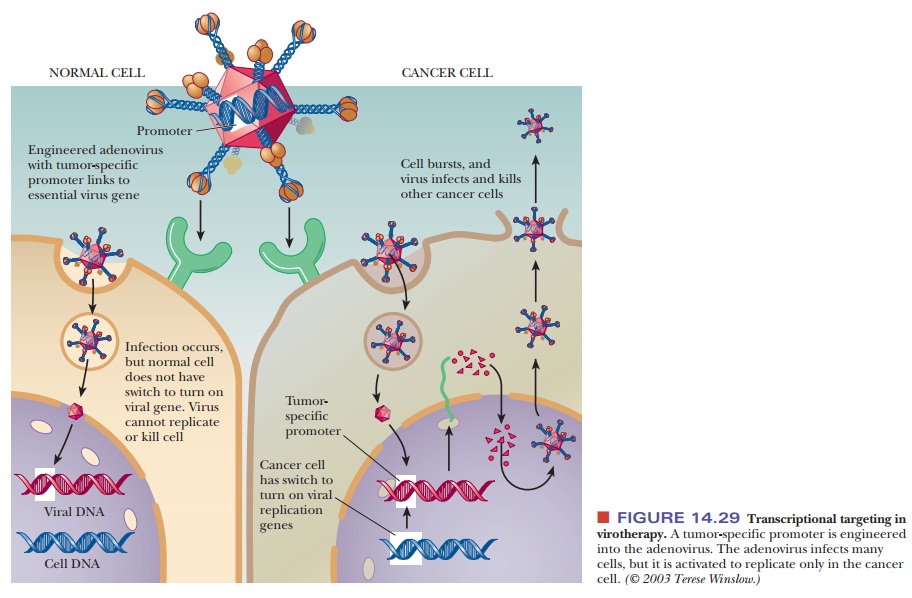 As we have seen, viruses come in many types and cause many diseases.

As we have seen, viruses come in many types and cause many diseases. Viruses can be very specific to a single cell type because they rely on a protein receptor on the cell to gain entry. Liver cells display receptors that nerve cells do not, and vice versa. Oncologists (doctors who treat cancer) have treated cancer for years with techniques such as radiation therapy and chemotherapy. These techniques attempt to target cancer cells, but, in the end, destroy other cells as well. In some sense, the goal of chemotherapy is to kill the cancer before the treatment kills the patient. If doctors could come up with a treatment that would be completely specific to cancer cells, it would go a long way, both toward stopping the cancer and toward making the patient’s life more comfortable during the treatment. This was another chance for researchers to find something helpful about viruses.

In the 1990s a new type of treatment for cancer, called virotherapy, was begun. This technique was shown to target human tumor cells grafted onto mice. The treatment eliminated the human tumors. The virus of choice was an adenovirus, which we saw on gene therapy. There are two strate-gies for virotherapy. One is to use the virus to attack and kill the cancer cell directly. The second is to have the virus ferry in a gene to the cancer cell that makes the cell more susceptible to a chemotherapy agent.

One of the biggest challenges in virotherapy is to make sure the virus spe-cifically targets the cancer cell. The common adenovirus is not specific for cancer cells, so, in order to use it for virotherapy, other techniques must also be employed. One of these is called transductional targeting. In this technique, antibodies are attached to the virus. These antibodies are created so that they target the cancer cell (see Figure 14.28). In this way, the normally indiscrimi-nant adenovirus attacks only cancer cells. Once inside, the virus reproduces and eventually lyses the cell. 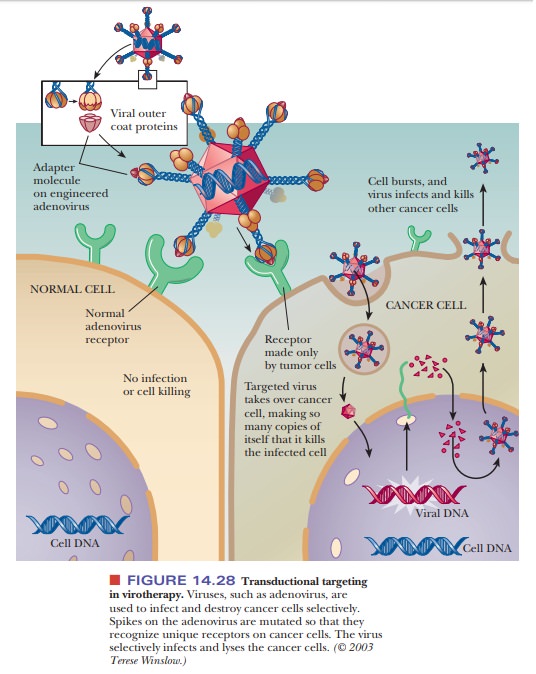 Another approach is called transcriptional targeting, shown in Figure 14.29. With this technique, the replication genes for adenovirus are placed after a pro-moter that is specific for a cancer cell. For example, skin cells make much more of the pigment melanin than other cells. Therefore, the genes for enzymes that make melanin are turned on more often in skin cells than in other cells (see Figure 14.29). Adenovirus can be engineered to have the promoter for the melanin-producing enzyme near the genes for virus replication. In cancerous skin cells, these promoters are triggered more often, so adenovirus replicates much quicker in skin-cancer cells, killing them specifically. Similar techniques have been used to target liver-cancer cells and prostate-cancer cells. 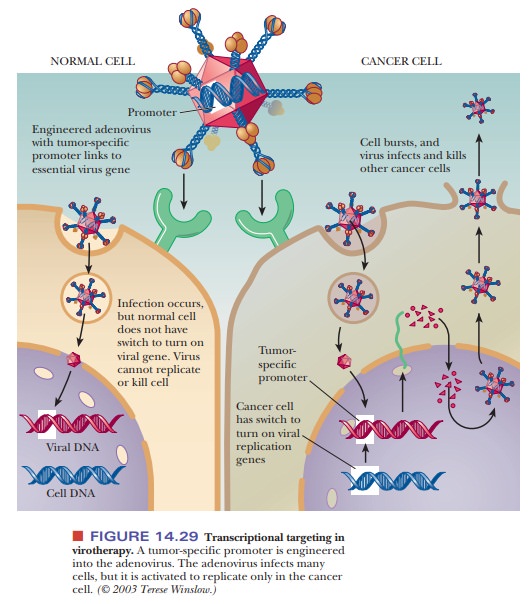 The other basic strategy is to have the virus ferry in a gene that makes the cancer cell more susceptible to chemotherapy. One such system uses a virus that targets rapidly dividing cells. Inside these cells, and only in these cells, the gene carried by the virus converts an innocuous pro-drug into an anticancer drug. These viruses are sometimes called “smart viruses” for their ability to select only the cancer cells. They then allow drugs to be used that are not harmful to normal cells.