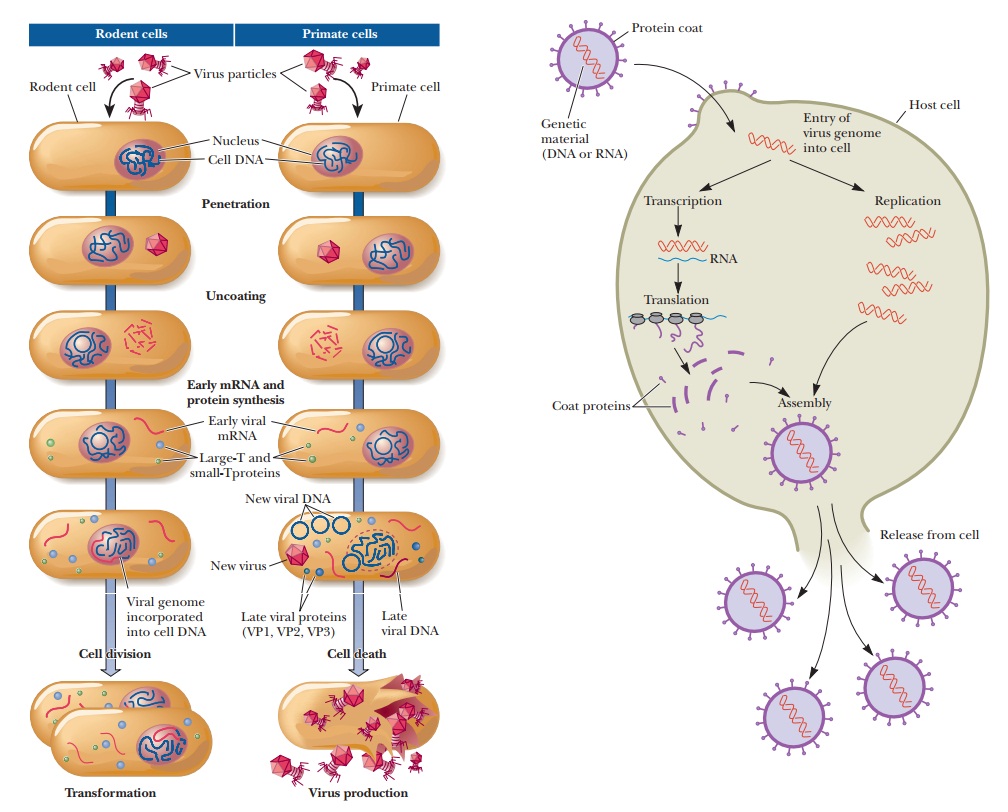 How does a virus infect a cell?Most viruses cannot survive for long periods outside cells, so they must quickly gain access to a cell.

Most viruses cannot survive for long periods outside cells, so they must quickly gain access to a cell. There are several mechanisms for gaining access, and preventing access to the cell has been a major focus of pharmaceutical companies trying to develop antiviral drugs.

Figure 14.4 shows a generic example of a virus infecting a cell. The virus binds to the cell membrane and releases its DNA into the cell. The DNA is then replicated by host DNA polymerases and transcribed by host RNA polymerases. The transcription and translation of the mRNA leads to the proteins that are necessary to make the coat proteins of the capsid. New virions are produced and then released from the cell. This is called the lytic pathway, as the host cells are lysed by this process. 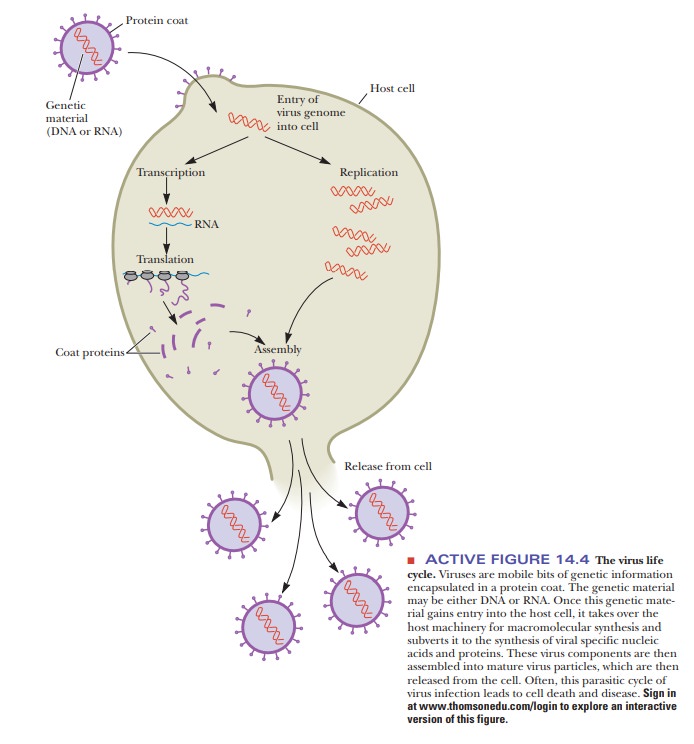 Viruses do not always lyse their host cells, however. A separate process called lysogeny involves the incorporation of the viral DNA into the host chromo-some. Simian virus 40 (SV40) is an example of a DNA virus. It appears to be spherical, but it is actually an icosahedron, a geometric shape with 20 faces that are equilateral triangles, as shown in Figure 14.5.

The genome of this virus is a closed circle of double-stranded DNA, with genes that encode the amino acid sequences of five proteins. Three of the five proteins are coat proteins. Of the remaining two proteins, one, the large-T protein, is involved in the develop-ment of the virus when it infects a cell. The function of the fifth protein, the small-T protein, is not known.

The outcome of infection by SV40 depends on the organism infected. When simian cells are infected, the virus enters the cell and loses its protein coat. The viral DNA is expressed first as mRNAs and then as proteins. The large-T protein is the first one made (Figure 14.6), triggering the replication of viral DNA, followed by viral coat proteins. The virus takes over the cellular machin-ery for both replication of DNA and protein synthesis. New virus particles are assembled, and eventually the infected cell bursts, releasing the new virus par-ticles to infect other cells.

The results are different when SV40 infects rodent cells. The process is the same as far as the production of the large-T protein, but replication of the viral DNA does not take place. The SV40 DNA already present in the cell can be lost or can be integrated into the DNA of the host cell. If the SV40 DNA is lost,

the infection has no apparent result. If it becomes integrated into the DNA of the host cell, the infected cell loses control of its own growth. As a result of the accumulation of large-T protein, the infected cell behaves like a cancer cell. The large-T gene is an oncogene, one that causes cancer. Its mechanism is a subject of active research.

How does a virus infect a cell?

A virus must attach to a host cell before it can penetrate, which is why so much research is involved in studying the exact mechanisms of viral attachment. A common method of attachment involves the binding of one of the spike proteins on the envelope of the virus to a specific receptor on the host cell. Figure 14.7 shows an example of HIV attachment. A specific spike protein called gp120 binds to a CD4 receptor on helper T cells. After this happens, a co-receptor complexes with CD4 and gp120. Another spike protein, gp41, then punctures the cell so that the capsid can enter. 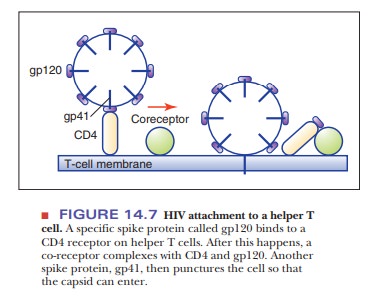