The original work by Rous showed how viruses could cause cancer in certain situations.

The original work by Rous showed how viruses could cause cancer in certain situations. The close homology between the oncogene sequence found in some viruses with the proto-oncogene sequences in the mammalian genome has led many researchers to theorize that the oncogenes may have been of mammalian origin. In the course of repeated infections and travels, the virus may pick up pieces of DNA from a host and deliver another piece of DNA to a host. In the course of the rapid mutation that occurs in retroviruses, these proto-oncogenes could be mutated to a form that is oncogenic.

Retroviruses that cause cancer in humans are known; some forms of leu-kemia (caused by HTLV-I and HTLV-II, which infect T cells of the immune system) are well-known examples, as well as cervical cancer caused by cervical papillomavirus. Theoretically, any retrovirus that inserts its DNA into the host chromosome could accidentally disable a tumor-suppressor gene or enable an oncogene by insertion of a strong promoter sequence near a proto-oncogene. One of the biggest fears of using in vivo delivery techniques for human gene therapy is that the viral DNA inserted into a human chromo-some might become incorporated into an otherwise healthy tumor-suppressor gene. This would potentially solve one of the individual’s problems by provid-ing a functional gene he or she was missing while causing an even greater problem. This happened, unfortunately, in 2003, where researchers in France were using viral-gene therapy to treat patients with X-linked SCID. In 9 of 11 cases, the viral-gene therapy restored the immune systems of the patients. However, two patients developed leukemia. It was later found that the virus had inserted itself, in each case, near a gene that has been found to be a leukemia oncogene. This was a tragic setback in viral-gene therapy, and now many government agencies are discussing the future of such therapy.

How do we fight cancer?

Cancer can be treated in a variety of ways. The more traditional approaches include surgeries to remove tumors, radiation and chemotherapy to kill cancerous cells, and treatment with monoclonal antibodies that target specific tumors. 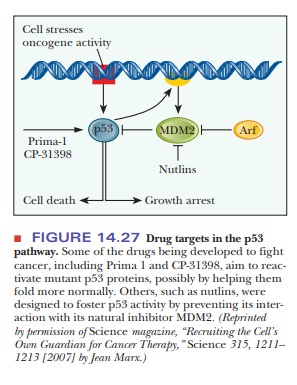 One of the most current focus points for research is the attempt to reactivate p53 in the cancerous tissues that have lost this function. Because this single gene was found to be the culprit in so many types of cancer, this became an obvious strategy. Clinical trials with mice have shown that in tumors that have lost p53 function, restoring p53 activity stops tumor growth and even shrinks the tumors. Remember that p53 has a two-pronged attack on tumor cells—it arrests the growth of the cell and it promotes cell death (apoptosis) of the cell. Many of the early trials involved specific delivery of an active p53 gene via gene therapy. However, such delivery is impractical for human patients in many cases. The current focus is to find drugs that increase the levels of p53. Figure 14.27 shows the points of attack of the most recent drug candidates. Two drugs, Prima-1 and CP-31398, reactivate mutant p53, perhaps by helping it fold more correctly than its mutated form. Another type of drug, called nutlins, inhibits a protein called MDM2, which is a natural inhibitor of p53. As has often been the case with cancer research, scientists and doctors must be very careful when tinkering with processes involved in cell growth. In some studies, reactivating p53 in certain laboratory animals had fatal effects as the reactivation caused a generalized cell death that went beyond the targeted tumors.