o   Over activation of cognitions about personal danger

o   Underestimation of ability to cope

o   Exclude anxiety due to substance intoxication or withdrawal, or due to delirium

o   Are there currently things in your life that are causing distress/worry?

o   Are there things that have happened in the past that you can‟t stop thinking about?

o   How is your general health?

o   Any one else in your family had similar problems?

o   Would you describe yourself as a worrier? Do you worry about things that others don‟t worry about?

o   Do you sometimes make mountains out of molehills?

o   Do you every find it hard to make decisions?

o   Have you ever felt your heart pounding, felt frightened/afraid – what do you think was the cause?

o   Ever felt like a disaster was about to happen to you?

o   Do they occur when other people wouldn‟t feel afraid?

o   Do you avoid going out?

o   Is there anything you would avoid if you could? What happens if you are unexpectedly faced with that object/situation?

o   Do you have worries/fears that prevent you from doing things you would like – or that others can do without difficulty?

o   Are you only worried if others will see you?

o   Are you worried/anxious in other settings?

o   Obsessive thoughts: Any thoughts that keep coming repeatedly into mind, even when you‟re trying to get rid of them?

§  Do you ever have to repeat actions over and over which most people would only do once?

§  Do you ever find yourself having to do things over and over again to get them just right?

§  Do you find yourself spending a lot of time doing things like cleaning or checking that everything is safe?

§  What happens if you are interrupted when doing these things?

o   Do you still have recurrent memories of an upsetting event?

o   Do you have nightmares, have trouble sleeping, or feel jumpy?

o   Are there things that remind you of the event?  Do you avoid these?

·        How has the trauma changed the way you feel about the future, about what you enjoy?

Panic Disorder (with or without agoraphobia)

o  Found across anxiety disorders and in non-anxious population

o  Characteristically involve clusters of situations including being outside the home, being in a crowd, on a bridge, in a car, train or bus

o  But fear NOT of the situation

o  Can occur with or without a history of panic disorder

o  In Panic disorder, the more agoraphobic avoidance there is, the worse the prognosis

·        Leads to avoidance or intense anxiety on exposure to feared stimulus

·        Fear of negative evaluation of performance in social situations. Fear they will do or say something embarrassing or humiliating. Fear visible anxiety symptoms

·        Probability and cost of negative evaluation is over-estimated

·        Excessive and persistent worry about a number of areas of life including family, health, job, finances, etc

·        Worrying dominant source of discomfort: spend half an average day worrying – most recognise they worry excessively about minor things but can‟t control it

o   Avoid sedatives: they will love them but will become dependent on them and underlying problems won‟t be fixed

o   Specialist referral if symptoms persist for a further 3 months

·         Upsetting and intrusive obsessional thoughts that are difficult to control (e.g. fear of contamination), leading to compulsive rituals (although can have rituals in the absence of obvious obsessions)

o   Hard to treat with CBT and antianxiolytics

o   Some evidence of effectiveness of low dose respiridone (?may be delusional component)

o   Actual or threatened severely traumatic event where the response was intense fear, helplessness or horror

o   Event is persistently re-experienced: recollections, dreams, distress to cues of an aspect of the event

·        Effective for most anxiety disorders

·        Symptoms result from mental processes outside conscious awareness.  Aim is to elucidate these

·        Benzodiazepines: may be useful for the short term or acute treatment of acute stress reactions. Due to tolerance and dependence, these are not useful for long-term use

o  For severe panic disorder (with or without agoraphobia), TCA‟s (eg imipramine) are the medication of choice. Suppression of panic attacks may occur after 4 – 6 weeks. Minimum treatment usually 6 months. Maximum is 18 months. Use alternative therapies if it fails after this time

o  For OCD, clomipramine (a TCA) and SSRIs may be a useful adjunct to CBT. Help minimize compulsions and manage the depression often associated with OCD.

·        Betablockers: Useful for the treatment of social phobia when performance anxiety is the main problem. These prevent noticeable symptoms (eg blushing or shaking), which are typically interpreted catastrophically by individuals. However, these drugs are not useful if the anxiety is more generalized

·        Mode of action: enhance GABA inhibition throughout the CNS

·        Binding affinity important in governing duration and degree of effect, in addition to elimination and dosage.

o  Midazolam: often used as premed for procedures and GA – relaxes and amnesia

o   CNS effects of BDZs all exacerbated by alcohol

·        Coexistence of anxiety and depressive symptoms is common:

o   Anxiousness and irritability are seen in the majority of depressed patients, panic attacks may occur

o   Asking which symptoms came first can be helpful 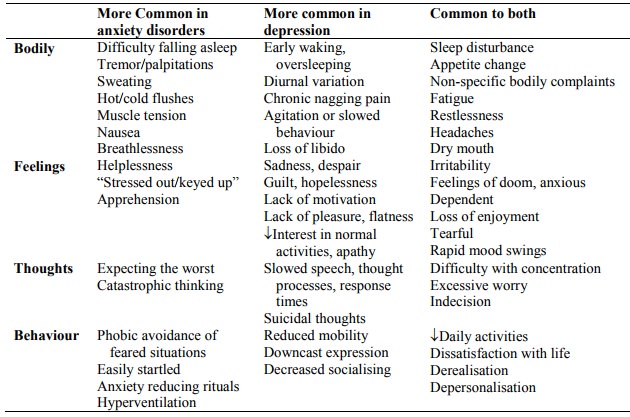