Meaning : Null Hypothesis and Alternative Hypothesis - Level of Significants and Type of Errors

Statistical hypothesis is some assumption or statement, which may or may not be true, about a population.

There are two types of statistical hypothesis

According to Prof. R.A.Fisher, “Null hypothesis is the hypothesis which is tested for possible rejection under the assumption that it is true”, and it is denoted by H0 .

For example: If we want to find the population mean has a specified value μ0 , then the null hypothesis H0  is set as follows H0 : μ = μ0

Any hypothesis which is complementary to the null hypothesis is called as the alternative hypothesis and is usually denoted by H1 .

For example: If we want to test the null hypothesis that the population has specified mean μ i.e., H0 : μ = μ 0 then the alternative hypothesis could be any one among the following: 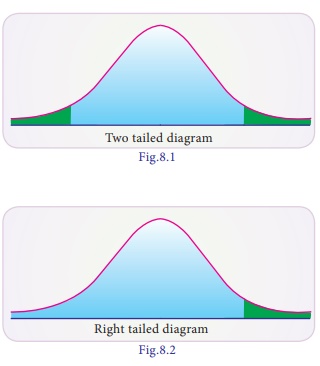 Types of Errors in Hypothesis testing

There is every chance that a decision regarding a null hypothesis may be correct or may not be correct. There are two types of errors. They are

Type I error: The error of rejecting H0  when it is true.

Type II error: The error of accepting when H0  it is false.

A region corresponding to a test statistic in the sample space which tends to rejection of H0 is called critical region or region of rejection.

The value of test statistic which separates the critical (or rejection) region and the acceptance region is called the critical value or significant value. It depend upon

(i) The level of significance

(ii) The alternative hypothesis whether it is two-tailed or single tailed.

For large samples, the standardized variable corresponding to the statistic  viz.,

The value of Z given by (1) under the null hypothesis is known as test statistic. The critical values of Z at commonly used level of significance for both two tailed and single tailed tests are given in the normal probability table (Refer the normal probably Table).

Since for large n, almost all the distributions namely, Binomial, Poisson, etc., can be approximated very closely by a normal probability curve, we use the normal test of significance for large samples.