2.        Z transform is widely used for analysis and synthesis of digital filter.

4.        In z transform user can characterize LTI system (stable/unstable, causal/anti-causal) and its response to various signals by placements of pole and zero plot.

ADVANTAGES OF ROC(REGION OF CONVERGENCE)

1.        ROC is going to decide whether system is stable or unstable.

Fig show the plot of z transforms. The z transform has real and imaginary parts. Thus a plot of imaginary part versus real part is called complex z-plane. The radius of circle is 1 called as unit circle. This complex z plane is used to show ROC, poles and zeros. Complex variable z is also expressed in polar form as Z= rejω where r is radius of circle is given by |z| and ω is the frequency of the sequence in radians and given by ∟z.

The linearity property states that if z

The Time shifting property states that if z x(n)

This property states that if

Thus scaling in z transform is equivalent to multiplying by an in time domain.

The Time reversal property states that if z

It means that if the sequence is folded it is equivalent to replacing z by z-1 in z domain.

The Differentiation property states that if z

The Circular property states that if z

Convolution of two sequences in time domain corresponds to multiplication of its Z transform sequence in frequency domain.

The Correlation of two sequences states that if z

Z transform of sequence x(n) is given by

Fourier transform of sequence x(n) is given by

Complex variable z is expressed in polar form as Z= rejω where r= |z| and ω is ∟z. Thus we can be written as

Thus, X(z) can be interpreted as Fourier Transform of signal sequence (x(n) r–n). Here r–n grows with n if r<1 and decays with n if r>1. X(z) converges for |r|= 1. hence Fourier transform may be viewed as Z transform of the sequence evaluated on unit circle. Thus The relationship between DFT and Z transform is given by 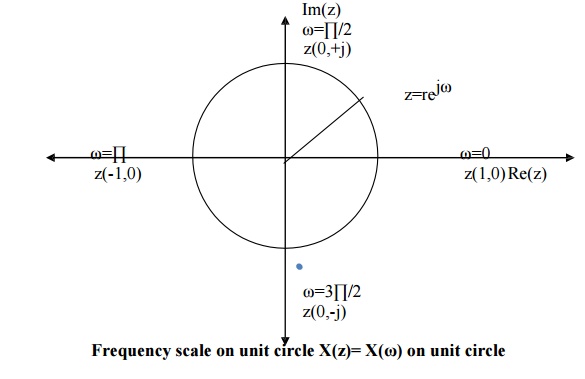 In this method X(z) is first expanded into sum of simple partial fraction.

The above equation can be written in partial fraction expansion form and find the coefficient AK and take IZT. 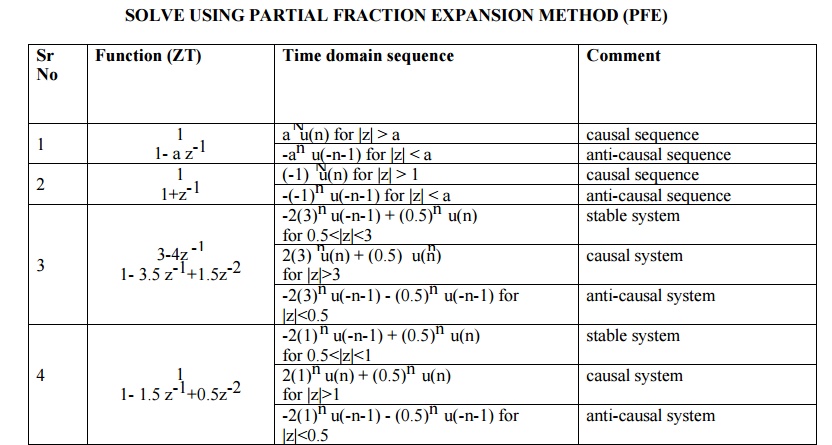 This is the expansion of z transform in power series form. Thus sequence x(n) is given as

Power series can be obtained directly or by long division method.

Example 2:Find the magnitude and phase plot of 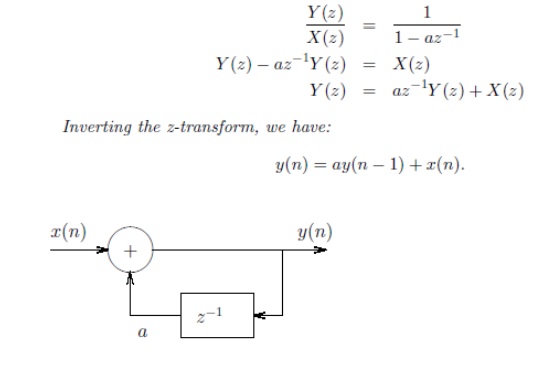 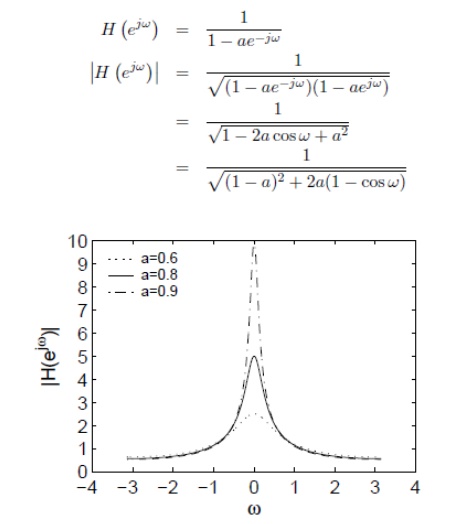 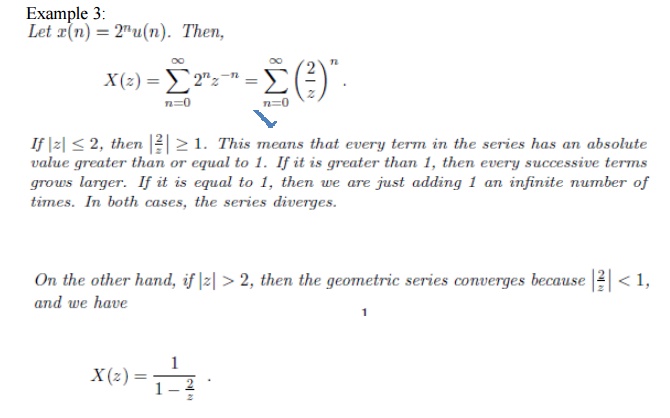 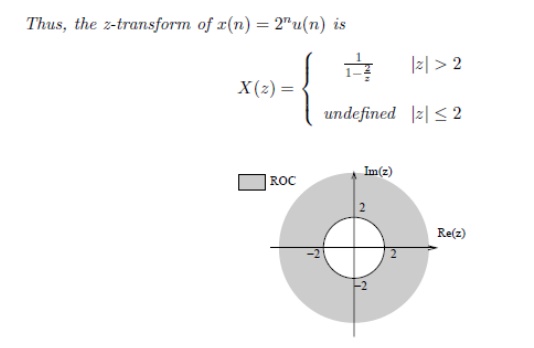 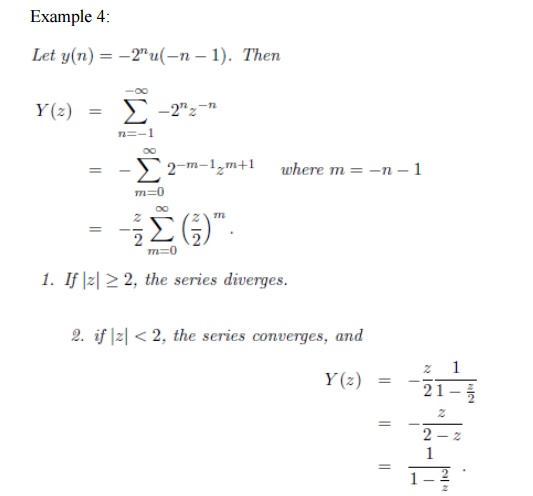 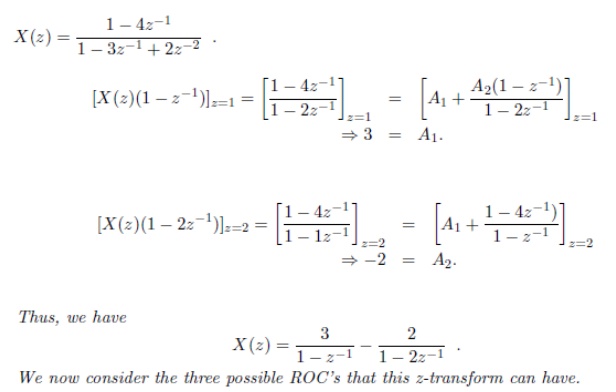 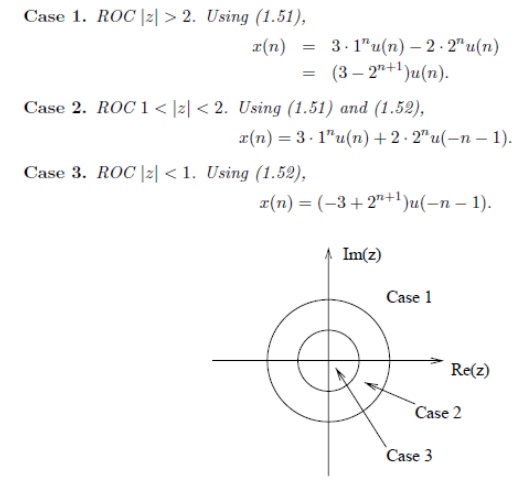 X(z) is a rational function, that is a ratio of two polynomials in z-1 or z.

ROC dos not contain any poles of X(z). This is because x(z) becomes infinite at the locations of the poles. Only poles affect the causality and stability of the system.

With this condition satisfied, the system will be stable. The above equation states that the LSI system is stable if its unit sample response is absolutely summable. This is necessary and sufficient condition for the stability of LSI system.

Hence LSI system is stable if and only if the ROC the system function includes the unit circle. i.e r < 1. This is the condition for stability of the LSI system in terms of

A causal and stable system must have a system function that converges for |z| > r < 1.

Difference equations are used to find out the relation between input and output sequences. It is also used to relate system function H(z) and Z transform.

we will start at n=0

The first part (A) is response depending upon initial condition.

The second Part (B) is the response of the system to an input signal.

Total response is the sum of zero state response and zero input response.

Q) A difference equation of the system is given below

Response of system to the input x(n) = nu(n)

Q) A difference equation of the system is given below