Work and heat transfers across the boundaries cause these changes.

The different thermodynamic systems and their characteristics were discussed. To undergo a change of state, the system has to interact with its surroundings. Work and heat transfers across the boundaries cause these changes.

Work as Defined in Mechanics

This simple definition of work confines only to the area of mechanics and can not be extended to the more complex problems in thermodynamics. Hence a new definition should be introduced to cover mechanical as well as the other forms of work.

The Thermodynamic Definition of Work

Positive work is done by a system, during a given process, when sole effect external to the system could be reduced to the lifting of a mass. 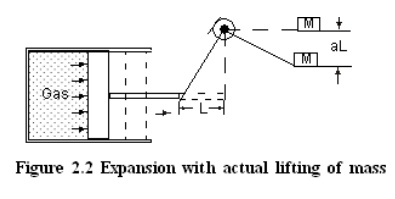