When a flow process is satisfying the following conditions, it is known as a steady flow process.

When a flow process is satisfying the following conditions, it is known as a steady flow process.

1.  The mass and energy content of the control volume remains constant with time.

2.  The state and energy of the fluid at inlet, at the exit and at every point within the control volume are time independent.

3.  The rate of energy transfer in the form of work and heat across the control surface is constant with time.

Therefore for a steady flow process 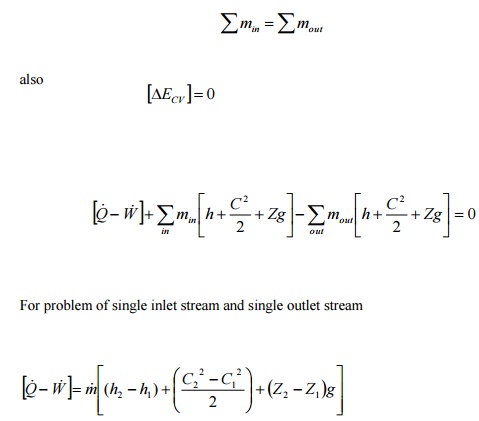 SFEE governs the working of a large number of components used in many engineering practices. In this section a brief analysis of such components working under steady flow conditions are given and the respective governing equations are obtained.

Turbines are devices used in hydraulic, steam and gas turbine power plants. As the fluid passes through  the turbine, work is done on the blades of the turbine which are attached to a shaft. Due to the work given to the blades, the turbine shaft rotates producing work. 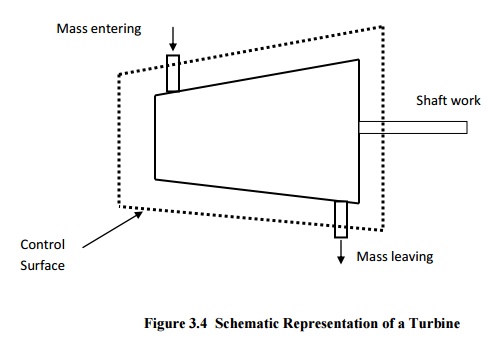 1.         Changes in kinetic energy of the fluid are negligible

2.         Changes in potential energy of the fluid are negligible.

Compressors (fans and blowers) are work consuming devices, where a low-pressure fluid is compressed by utilising mechanical work. Blades attached to the shaft of the turbine imparts kinetic energy to the fluid which is later converted into pressure energy. 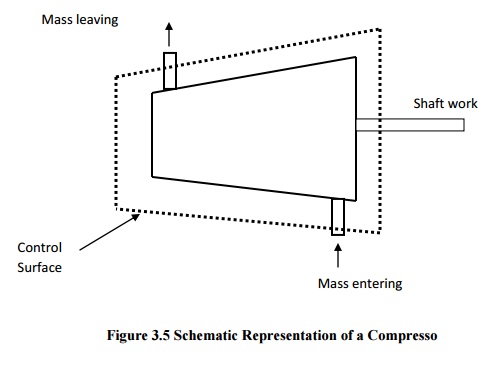 1.        Changes in the kinetic energy of the fluid are negligible

2.        Changes in the potential energy of the fluid are negligible

Applying the above equations SFEE becomes 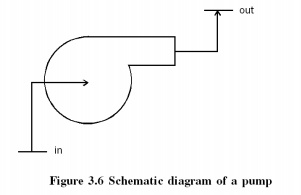 2.    Changes in kinetic energy of the fluid are negligible.

Nozzles are devices which increase the velocity of a fluid at the expense of pressure. A typical nozzle used for fluid flow at subsonic* speeds is shown in Figure 3.7.

1.           In nozzles fluids flow at a speed which is high enough to neglect heat lost or gained as it crosses the entire length of the nozzle. Therefore, flow through nozzles can be regarded as adiabatic. That is =0.

2.    There is no shaft or any other form of work transfer to the fluid or from the fluid; that is

Changes in the potential energy of the fluid are negligible. 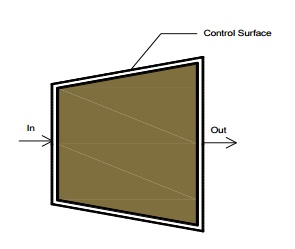 Diffusers are (reverse of nozzles) devices which increase the pressure of a fluid stream by reducing its kinetic energy.

Similar to nozzles, the following assumptions hold good for diffusers.

1.       Heat lost or gained as it crosses the entire length of the nozzle. Therefore, flow through nozzles can be regarded as adiabatic. That is Q = 0

3.       Changes in the potential energy of the fluid are negligible

Devices in which heat is transferred from a hot fluid stream to a cold fluid stream are known as heat exchangers.

A throttling process occurs when a fluid flowing in a line suddenly encounters a restriction in the flow passage. It may be

· a capillary tube which is normally found in a refrigerator as shown in Figure 3.10 (c) 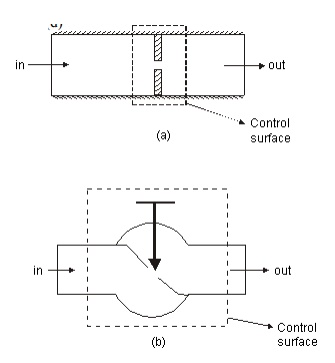 First Law for a Cyclic Process 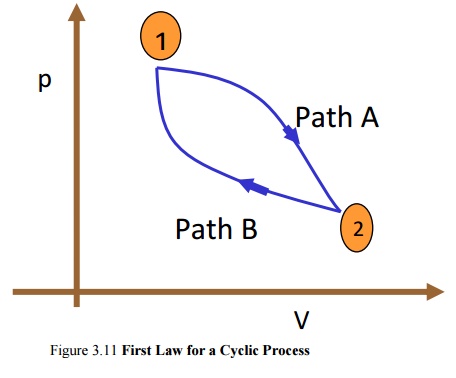 Consider a system undergoing a cycle consisting of two processes A & B as shown in Figure 3.11 Net energy change

This was first proved by Joule, based on the experiments he conducted between 1843 and 1858, that were the first quantitative analysis of thermodynamic systems.

Energy is a property of a system

Consider a system undergoing a process from state1 to state2 along path A as shown in Figure 3.12. Let the system be taken back to the initial state 1 along two possible paths B and C. Process A, combined separately with process B and C forms two possible cycles. 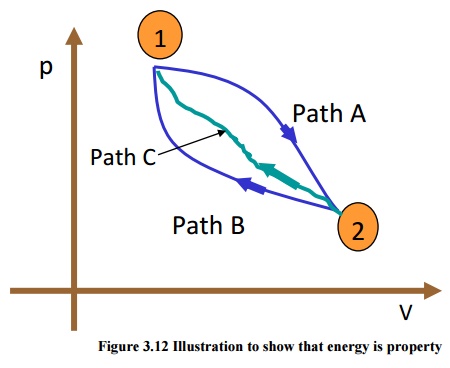 From Equation (3.21) and (3.22) it can be concluded that energy change in path B and path C are equal and hence energy is a point function depending only on the end states.

It has been already shown that all the properties are point functions and hence energy is also a property of the system.

From first law for a stationary closed system undergoing a process

For a constant volume process

For a constant pressure process dp =0

· Since h and u are properties of a system, dh =CpdT and du=CvdT, for all processes.

First law for an open system under unsteady flow conditions

Many processes of engineering interest involve unsteady flow, where energy and mass

Example for such conditions are:

1)   Filling closed tanks with a gas or liquid.

3)   Fluid flow in reciprocating equipments during an individual cycle.

instant of time the state is uniform throughout the entire control volume.

3)  The state of the mass crossing each of the areas of flow on the control surface is constant with time although the mass flow rates may be time varying.

Unlike in steady flow system, duration of observation Dt plays an important role in transient analysis. Let mass of the working fluid within the control volume before and after the observation be m1 and m2 respectively. Applying mass balance we get,

Where  ∑mi is the mass entered the control volume during the interval Dt seconds.

∑m0 is the mass left the control volume during the interval Dt seconds.

By applying energy balance we get,

Where ECV is the change in energy content of the control volume in Dt seconds.

QCV is the heat energy entered into the control volume in Dt seconds.

WCV is the work energy left the control volume in Dt seconds.

hi & h0 are specific enthalpy of the inlet and outlet streams respectively.

are the kinetic energy of the inlet and outlet streams respectively.

Zig & Z0g are the potential energy of inlet and outlet streams respectively.

An engine which could provide work transfer continuously without heat transfer is known as perpetual motion machine of first kind. It is impossible to have such an engine as it violates first law of thermodynamics.