Statistical Thermodynamics is microscopic approach in which, the matter is assumed to be made of numerous individual molecules. Hence, it can be regarded as a branch of statistical mechanics dealing with the average behaviour of a large number of molecules.

Classical thermodynamics is macroscopic approach. Here, the matter is considered to be a continuum without any concern to its atomic structure.

Consider a gas in a container. Pressure exerted at the wall of the container is the average force per unit area due to the collision of the gas molecules on the wall surface. To determine this pressure, we need not know the behaviour of individual molecules of the gas. This approach is macroscropic approach. However, the results obtained from macroscopic and statistical study of matter.

A Thermodynamic system is defined as a quantity of matter or a region in space whose behaviour is being investigated.

Everything external to the system is defined as surroundings. In its usual context the term ‘surroundings’ is restricted to the regions in the immediate vicinity which has a detectable influence on the system.

Boundary is the surface which separates the system from its surroundings. It may be fixed or moving and real or imaginary. 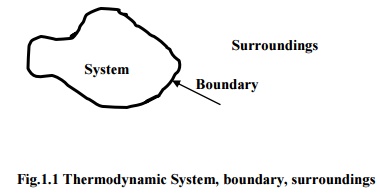