THE FIRST LAW OF THERMODYNAMICS

Energy interactions between a system and its surroundings across the boundary in the form of heat and work have been discussed separately in the previous chapter. So far, no attempt has been made to relate these interactions between themselves and with the energy content of the system.

First law of thermodynamics, often called as law of conservation of energy, relating work, heat, and energy content of the system will be discussed in detail in this chapter.

In its more general form, the first law may be stated as follows

It is based on the experimental observations and can not be proved mathematically. All the observations made so far, confirm the correctness of this law.

First Law of Thermodynamics for a Closed System Undergoing a Process

For a system of constant mass, energy can enter or leave the system only in two forms namely work and heat.

Let a closed system of initial energy E1 receives Q units of net heat and gives out W units of work during a process. If E2 is energy content at the end of the process as given in Figure 3.1, applying first law we get

The term internal energy usually denoted by the letter U is the energy due to such factors as electron spin and vibrations, molecular motion and chemical bond.

Kinetic energy term is due to the system movement with a velocity C. For stationary systems this term will be zero. The term gc is a constant of value 1 in SI unit. It will be dropped here after since SI unit is followed throughout the book.

Potential energy term is due to the location of the system in the gravitational field. It remains constant for a stationary system. The unit of energy in SI is kJ. 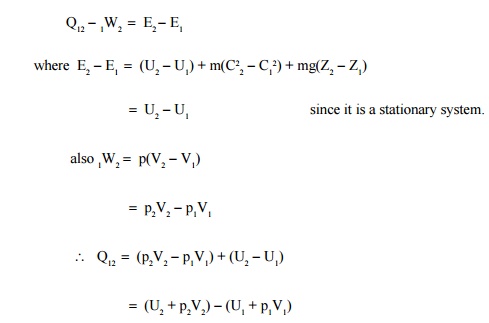 The terms within brackets are all properties depending on the end states. This combination of properties may be regarded as a single property known as enthalpy. It is usually denoted by the letter H.

u is specific internal energy in kJ/kg and

v is specific volume in m3/kg

The Flow energy =Work done in moving the mass

First Law of Thermodynamics for a Control Volume

Mass simultaneously entering and leaving the system is a very common phenomenon in most of the engineering applications. Control volume concept is applied to these devices by assuming suitable control surfaces.

To analyze these control volume problems, conservation of mass and energy concepts are to be simultaneously considered.

Energy may cross the control surface not only in the form of heat and work but also by total energy associated with the mass crossing the boundaries. Hence apart from kinetic, potential and internal energies, flow energy should also be taken into account. 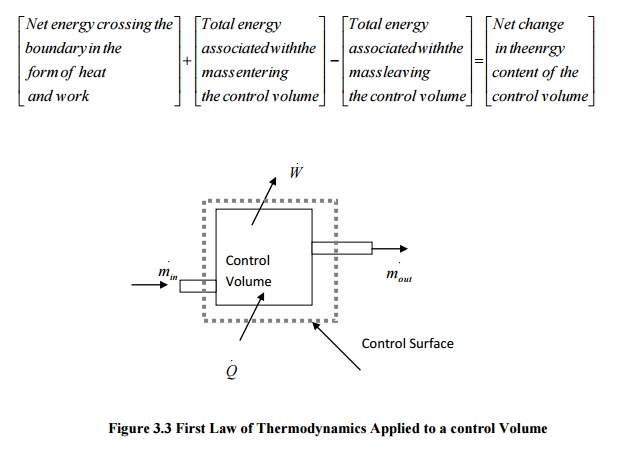 Figure 3.3 First Law of Thermodynamics Applied to a control Volume

As a rate equation, it becomes