Heat is the interaction between systems which occurs by virtue of their temperature difference when they communicate.

Heat is the interaction between systems which occurs by virtue of their temperature difference when they communicate.

· Heat given into a system is positive

· Heat coming out of the system is negative 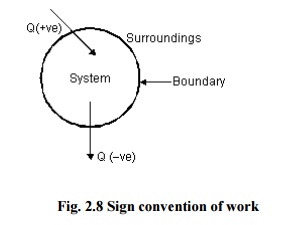 Conduction, convection and radiation are the three possible modes of heat transfer between systems and between system and its surroundings.

Conduction occurs without bulk movement of molecules. Energy transfer in conduction is due to lattice vibration and free electron movement. It is the predominant mode of heat transfer in solids.

Bodies separated by a distance may exchange heat in the form of electromagnetic waves without the participation of the intervening medium. It is known as radiation. It is generally a surface phenomenon. Sometimes as in the case of gas mixtures containing carbon dioxide and water vapour it is a volume phenomenon.