In can be observed the change in any property during a process depends only on end states. Therefore all the properties are point functions.

To demonstrate path and point functions, let us consider two stations A and B on a hill as shown in the Fig.1.6. While moving from station A to station B, let the distance traveled and increase in height from the mean sea level are observed. Distance traveled in path 1 is different from that in path 2. Hence it may be regarded as path function. But the change in height is same in both path 1 and path 2, therefore it is a point function. 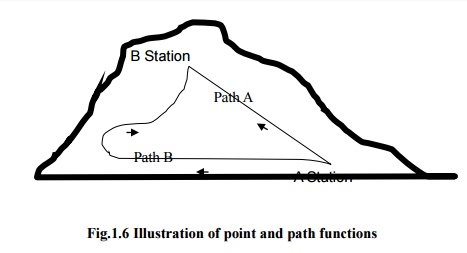 Consider pressure and specific volume (Volume per unit mass) are the two independent, intensive properties, describing the state of a compressible system. On a p-V diagram the state will assume a point as represented in the Fig.1.7(a). Let the system be taken to another state such that all the intermediate states are equilibrium states. The curve connecting the initial state and final state, passing through all the intermediate states is indicating the path of the process. In non-quasi-equilibrium process as the intermediate status can not be defined, the path is denoted by dashed line as given in Fig.1.7(b) 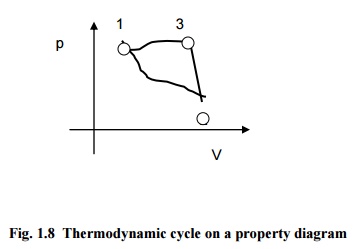