Windows NT has been portrayed as many different things during its short lifetime. When it first appeared, it was perceived by many as the replacement for Windows 3.1, an alternative to UNIX, and finally has settled down as an operating system for workstations, servers and power users.

Windows NT has been portrayed as many different things during its short lifetime. When it first appeared, it was perceived by many as the replacement for Windows 3.1, an alternative to UNIX, and finally has settled down as an operating system for workstations, servers and power users. This chameleon-like change was not due to any real changes in the product but were caused by a mixture of aspirations and misunderstandings.

Windows NT is rapidly replacing Windows 3.1 and Win-dows 95 and parts of its technology have already found them-selves incorporated into Windows 95 and Windows for Workgroups. Whether the replacement is through a merging of the operating system technologies or through a sharing of com-mon technology, only time will tell. The important message is that the Windows NT environment is becoming prevalent, especially with Microsoft’s aim of a single set of programming interfaces that will allow an application to run on any of its operating system environments. Its greater stability and reliability is another fea-ture that is behind its adoption by many business systems in preference over Windows 95. All this is fine, but how does this fit with an embedded system?

There are several reasons why Windows NT is being used in real-time environments. It may not have the speed of a dedi-cated RTOS but it has the important features and coupled with a fast processor, reasonable performance.

Most PC-based operating systems were written in low-level assembler language instead of a high level language such as C or C++. This decision was taken to provide smaller programs sizes and the best possible performance. The disadvantage is that the operating system and applica-tions are now dependent on the hardware platform and it is extremely difficult to move from one platform to another. MS-DOS is writen in 8086 assembler which is incompatible with the M68000 processors used in the Apple Macintosh. For a software company like Microsoft, this has an addi-tional threat of being dependent on a single processor platform. If the platform changes — who remembers the Z80 and 6502 processors which were the mainstays of the early PCs — then its software technology becomes obsolete.

With an operating system that is written in a high level language and is portable to other platforms, it allows Microsoft and other application developers to be less hard-ware dependent.

While more performant operating systems such as UNIX and VMS offer the ability to run multiple applications simultaneously, this facility is not really available from the Windows and MS-DOS environments (a full explanation of what they can do and the difference will be offered later in this chapter). This is now becoming a very important aspect for both users and developers alike so that the full perform-ance of today’s processors can be utilised.

Multi-threading refers to a way of creating software that can be reused without having to have multiple copies of the code or memory spaces. This leads to more efficient use of both memory and code.

Unlike Windows and MS-DOS which are completely linked to the Intel 80x86 architecture, Windows NT through its portability is processor independent and has been ported to other processor architectures such as Motorola’s PowerPC, DEC’s Alpha architecture and MIPS RISC processor sys-tems.

Windows NT uses a special interface to the processor hardware which makes it independent of the processor architecture that it is running on. As a result, this not only gives processor independence but also allows the operating system to run on multiprocessor systems.

Windows NT offers several levels of security through its use of a multi-part access token. This token is created and verified when a user logs onto the system and contains IDs for the user, the group he is assigned to, privileges and other information. In addition, an audit trail is also provided to allow an administrator to check who has used the system, when they used it and what they did. While an overkill for a single user, this is invaluable with a system that is either used by many or connected to a network.

Both security and POSIX support are commercially essen-tial to satisfy purchasing requirements from government departments, both in the US and the rest of the world.

Windows NT is a pre-emptive multitasking environment that will run multiple applications simultaneously and uses a priority based mechanism to determine the running order. It is capable of providing real-time support in that it has a priority mechanism and fast response times for interrupts and so on, but it is less deterministic — there is a wider range of response times

— when compared to a real-time operating system such as pSOS or OS-9 used in industrial applications. It can be suitable for many real-time applications with less critical timing characteristics and this is a big advantage over the Windows 3.1 and Windows 95 environments. It is interesting to note that this technology now forms the backbone of all the Windows software environments.

Windows NT calls all applications, device drivers, software tasks and so on processes and this nomenclature will be used from now on. Each process can be assigned one of 32 priority levels which determines its scheduling priority. The 32 levels are di-vided into two groups called the real-time and dynamic classes. 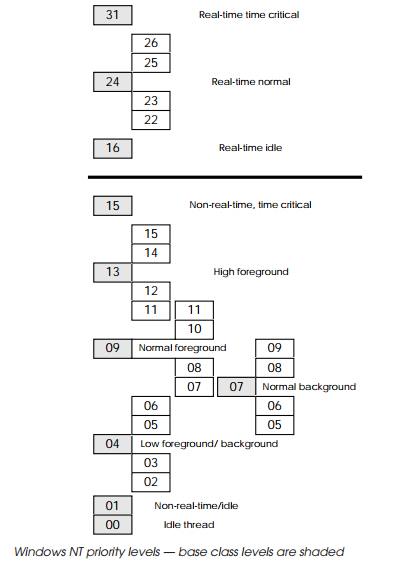 The diagram shows how the base classes are organised. The first point is that within a given dynamic base class, it is possible for a lot of overlap. Although a process may have a lower base class compared to another process, it may be at a higher priority than the other one depending on the actual priority level that has been assigned to it. The real-time class is a little simpler although again there is some possibility for overlap.

User applications like word processors, spread sheets and so on run in the dynamic class and their priority will change depending on the application status. Bring an application from the background to the foreground by expanding the shrunk icon or by switching to that application will change its priority appropriately so that it gets allocated a higher priority and therefore more processing. Real-time processes include device drivers handling the keyboard, cursor, file system and other similar activities.

The concept of priorities is not solely restricted to the pre-emption priority previously described. Those priorities come into play when an event or series of events occur. The events them-selves are also controlled by 32 priority levels defined by the hardware abstraction layer (HAL). 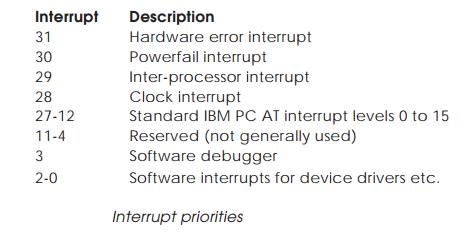 The combination of both priority schemes provides a fairly complex and flexible method of structuring how external and internal events and messages are handled.