It is also possible to get a condition called priority inversion where a lower priority task can continue running despite there being a higher priority task active and waiting to preempt.

It is also possible to get a condition called priority inversion where a lower priority task can continue running despite there being a higher priority task active and waiting to preempt.

This can occur if the higher priority task is in some way blocked by the lower priority task through it having to wait until a message or semaphore is processed. This can happen for several reasons.

One metric of an operating system is the longest period of time that all interrupts are disabled. This must then be added to any other interrupt latency calculation to determine the actual latency period.

If a message is sent to the operating system to activate a task, many systems will process the message and then reschedule accordingly. In this way, the message queue order can now define the task priority. For example, consider an ISR that sends an unblocking message to two tasks, A and B, that are blocked waiting for the message. The ISR sends the message for task A first followed by task B. The ISR is part of the RTOS kernel and therefore may be subject to several possible conditions:

Although the message calls may be completed, their action may be held pending by the RTOS so that any resulting pre-emption is stopped from switching out the ISR.

These conditions can cause priority inversion to take place. With condition 1, the ISR messages are held pending and proc-essed. The problem arises with the methodology used by the operating system to process the pending messages. If it processes all the messages, effectively unblocking both tasks before instigat-ing the scheduler to decide the next task to run, all is well. Task B will be scheduled ahead of task A because of its higher priority. The downside is the delay in processing all the messages before selecting the next task.

Most operating systems, however, only have a single call to process and therefore in normal operation do not expect to handle multiple messages. In this case, the messages are handled indi-vidually so that after the first message is processed, task A would be unblocked and allowed to execute. The message for task B would either be ignored or processed as part of the housekeeping at the next context switch. This is where priority inversion would occur. The ISR has according to its code unblocked both tasks and thus would expect the higher priority task B to execute. In practice, only task A is unblocked and is running, despite it being at a lower priority. This scenario is a programming error but one that is easy to make.

To get around this issue, some RTOS implementations restrict an ISR to making either one or no system calls. With no system calls, the operating system itself will treat the ISR event as an internal message and will unblock any task that is waiting for an ISR event. With a single system call, a task would take the responsibility for controlling the message order to ensure that priority inversion does not take place.

Waiting for a resource

If a resource is shared with a low priority task and it does not release it, a higher priority task that needs it can be blocked until it is released. A good example of this is where the interrupt handler is distributed across a system and needs to access a common bus to handle the interrupt. This can be the case with a VMEbus system, for example.

VMEbus is an interconnection bus that was developed in the early 1980s for use within industrial control and other real-time applications. The bus is asynchronous and is very similar to that of the MC68000. It comprises of a separate address, data, interrupt and control buses.

If a VMEbus MASTER wishes to inform another that a message is waiting or urgent action is required, a VMEbus inter-rupt can be generated. The VMEbus supports seven interrupt priority levels to allow prioritisation of a resource.

Any board can generate an interrupt by asserting one of the levels. Interrupt handling can either be centralised, and handled by one MASTER, or can be distributed among many. For multi-processor applications, distributed handling allows rapid direct communication to individual MASTERs by any board in the system capable of generating an interrupt: the MASTER that has been assigned to handle the interrupt requests the bus and starts the interrupt acknowledgement cycle. Here, careful consideration of the arbitration level chosen for the MASTER is required. The interrupt response time depends on the time taken by the handler to obtain the bus prior to the acknowledgement. This has to be correctly assigned to achieve the required performance. If it has a low priority, the overall response time may be more than that obtained for a lower priority interrupt whose handler has a higher arbitration level. The diagrams below show the relationship for both priority and round robin arbitration schemes. Again, as with the case with arbitration schemes, the round robin system has been assumed on average to provide equal access for all the priority levels. 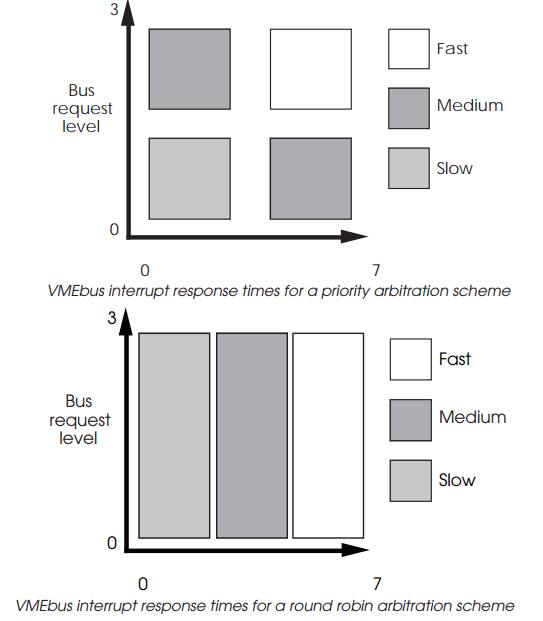 VMEbus only allows a maximum of seven separate inter-rupt levels and this limits the maximum number of interrupt handlers to seven. For systems with larger numbers of MASTERs, polling needs to be used for groups of MASTERs assigned to a single interrupt level. Both centralised and distributed interrupt handling schemes have their place within a multiprocessor sys-tem. Distributed schemes allow interrupts to be used to pass high priority messages to handlers, giving a fast response time which might be critical for a real-time application. For simpler designs, where there is a dominant controlling MASTER, one handler may be sufficient.

There are times when the system requires different charac-teristics from those originally provided or alternatively wants a system response that is not priority based. This can be achieved by using a fairness system where the bus access is distributed across the requesting processors. There are various schemes that are available such as round-robin where access is simply passed from one processor to another. Other methods can use time sharing where the bus is given to a processor on the understanding that it must be relinquished within a maximum time frame.

These type of systems can affect the interrupt response because bus access is often necessary to service an interrupt.