The software structure used within UNIX is very modular, despite its long development history. It consists of several layers starting with programming languages, command scripts and applications, shells and utilities, which provide the interface software or application the user sees.

The software structure used within UNIX is very modular, despite its long development history. It consists of several layers starting with programming languages, command scripts and applications, shells and utilities, which provide the interface software or application the user sees. In most cases, the only difference between the three types of software is their interaction and end product, although the more naive user may not perceive this.

The most common software used is the shell, with its commands and utilities. The shell is used to provide the basic login facilities and system control. It also enables the user to select application software, load it and then transfer control to it. Some of its commands are built into the software but most exist as applications, which are treated by the system in the same way as a database or other specialised application.

Programming languages, such as C and Fortran, and their related tools are also applications but are used to write new software to run on the system. 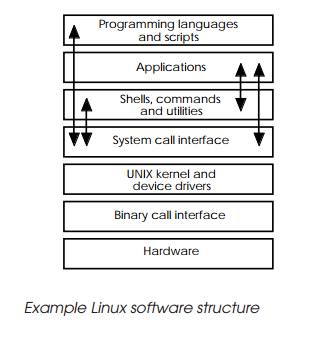 As shown in the diagram, all these layers of software interface with the rest of the operating system via the system call interface. This provides a set of standard commands and services for the software above it and enables their access to the hardware, filing systems, terminals and processor. To read data from a file, a set of system calls are carried out which locate the file, open it and transfer the required data to the application needing it. To find out the time, another call is used, and so on. Having transferred the data, system calls are used to call the UNIX kernel and special software modules, known as device drivers, which actually per-form the work required.

Up to this point, the software is essentially working in a standard software environment, where the actual hardware con-figuration (processor, memory, peripherals and so on) is still hidden. The hardware dependant software which actually drives the hardware is located at the binary call interface.

Of all the layers, the kernel is the heart of the operating system and it is here that the multi-tasking and multi-user aspects of Linux and memory control are implemented. Control is achieved by allocating a finite amount of processor time to each process — an application, a user shell, and so on.

When a process starts executing, it will either be stopped involuntarily (when its CPU time has been consumed) or, if it is waiting for another service to complete, such as a disk access. The next process is loaded and its CPU time starts. The scheduler decides which process executes next, depending on how much CPU time a process needs, although the priority can be changed by the user. It should be noted that often the major difference between UNIX variants and/or implementations is the scheduling algo-rithm used.

One problem facing multi-user operating systems is that of access to I/O devices, such as printers and terminals. Probably the easiest method for the operating system is to address all peripher-als by unique names and force application software to directly name them. The disadvantage of this for the application is that it could be difficult to find out which peripheral each user is using, especially if a user may login via a number of different terminals. It would be far easier for the application to use some generic name and let the operating system translate these logical names to physical devices. This is the approach taken by Linux.

Processes have three standard files associated with them: stdin, stdout and stderr. These are the default input, output and error message files. Other files or devices can be reassigned to these files to either receive or provide data for the active process. A list of all files in the current directory can be displayed on the terminal by typing ls<cr> because the terminal is automatically assigned to be stdout. To send the same data to a file, ls > filelist<cr> is entered instead. The extra > filelist redirects the output of the ls command. In the first case, ls uses the normal stdout file that is assigned to the terminal and the directory information appears on the terminal screen. In the second exam-ple, stdout is temporarily assigned to the file filelist. Nothing is sent to the terminal screen — the data is stored within the file instead.

Data can be fed from one process directly into another using a ‘pipe’. A process to display a file on the screen can be piped into another process which converts all lower case characters to upper case. It can then pipe its data output into another process, which pages it automatically before displaying it. This command line can be written as a data file or ‘shell script’, which provides the commands to the user interface or shell. Shell scripts form a programming language in their own right and allow complex commands to be constructed from simple ones. If the user does not like the particular way a process presents information, a shell script can be written which executes the process, edits and reformats the data and then presents it. There are two commonly used shell interfaces: the standard Bourne shell and the ‘C’ shell. Many application programs provide their own shell which hide the Linux operating system completely from the user.

After a user has logged onto the system, Linux starts to run the shell program by assigning stdin to the terminal keyboard and stdout to the terminal display. It then prints a prompt and waits for a command to be entered. The shell takes the command line and deciphers it into a command with options, file names and so on. It then looks in a few standard directories to find the right program to execute or, if the full path name is used, goes the directory specified and finds the file. If the file cannot be found, the shell returns an error message. 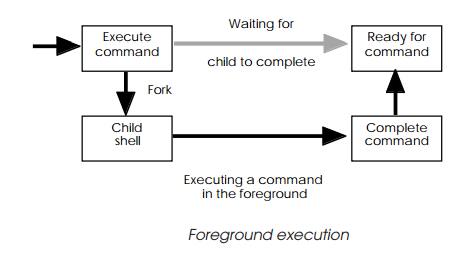 The next stage appears to be a little strange. The shell forks i.e. it creates a duplicate of itself, with all its attributes. The only difference between this new child process and its parent is the value returned from the operating system service that performs the creation. The parent simply waits for the child process to complete. The child starts to run the command and, on its comple-tion, it uses the operating system exit call to tell the kernel of its demise. It then dies. The parent is woken up, it issues another prompt, and the mechanism repeats. Running programs in this way is called executing in the foreground and while the child is performing the required task, no other commands will be ex-ecuted (although they will still be accepted from the keyboard!).

An alternative way of proceeding is to execute the com-mand in background. This is done by adding an ampersand to the end of the command. The shell forks, as before, with each com-mand as it is entered — but instead of waiting for the child to complete, it prompts for the next command. The example below shows three commands executing in background. As they com-plete, their output appears on stdout. (To prevent this disrupting a command running in foreground, it is usual to redirect stdout to a file.) Each child is a process and is scheduled by the kernel, as necessary. 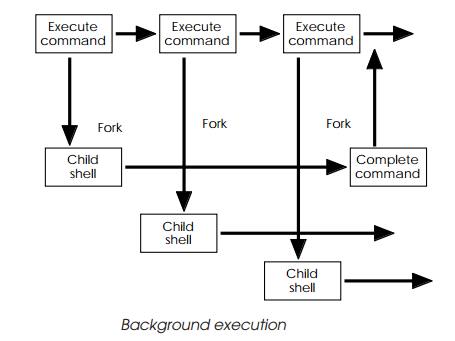 There are two classes of physical I/O devices and their names describe the method used to collect and send data to them. All are accessed by reading and writing to special files, usually located in the /dev directory, as previously explained. Block de-vices transfer data in multiples of the system block size. This method is frequently used for disks and tapes. The other method is called character I/O and is used for devices such as terminals and printers.

Block devices use memory buffers and pools to store data. These buffers are searched first to see if the required data is present, rather than going to the slow disk or tape to fetch it. This gives some interesting user characteristics. The first is that fre-quently used data is often fetched from memory buffers rather than disk, making the system response apparently much better. This effect is easily seen when an application is started a second time. On its first execution, the system had to fetch it in from disk but now the information is somewhere in memory and can be accessed virtually instantaneously. The second characteristic is the performance improvement often seen when the system RAM is increased. With more system memory, more buffers are avail-able and the system spends less time accessing the disk.

It is possible to access some block devices directly, without using memory buffers. These are called raw accesses and are used, for example, when copying disks.

For devices such as terminals and printers, block transfers do not make much sense and here character transfers are used. Although they do not use memory buffers and pools in the same way as block devices, the Linux kernel buffers requests for single characters. This explains why commands must be terminated with a carriage return — to tell the kernel that the command line is now complete and can be sent to the shell.

With many users running many different processes, there is a great potential for problems concerning memory allocation and the protection of users from accesses to memory and peripherals that are currently being used by other users of the system. This is especially true when software is being tested which may attempt to access memory that does not exist or is already being used. To solve this sort of problem, Linux depends on a memory manage-ment unit (MMU) — hardware which divides all the memory and peripherals into sections which are marked as read only, read or write, operating system accesses only, and so on. If a program tries to write to a read only section, an error occurs which the kernel can handle. In addition, the MMU can translate the memory addresses given by the processor to a different address in memory.