The memory model that the processor offers can and often varies with the model defined by the operating system and is open to the software designer to use.

The memory model that the processor offers can and often varies with the model defined by the operating system and is open to the software designer to use. In other words, although the processor may support a full 32 bit address range with full memory mapped I/O and read/write access anywhere in the map at a level of an individual word or map, the operating system’s representation of the memory map may only be 28 bits, with I/O access allocated on a 512 byte basis with read only access for the first 4 Mbytes of RAM and so on.

This discrepancy can get even wider, the further down in the levels that you go. For example, most processors that have sophisticated cache memory support use the memory manage-ment unit. This then requires fairly detailed information about the individual memory blocks within a system. This information has to be provided to the RTOS and is normally done using various memory allocation techniques where information is provided when the system software is compiled and during operation.

Most real-time operating systems for processors where the memory map can be configured, e.g. those that have large memory addressing and use memory mapped I/O, get around this prob-lem by using a special file that defines the memory map that the system is expected to use and support. This will define which memory addresses correspond to I/O areas, RAM, ROM and so on. When a task is created, it will be given a certain amount of memory to hold its code area and provide some initial data storage. If it requires more memory, it will request it from the RTOS using a special call such as malloc(). The RTOS will look at the memory request and allocate memory by passing back a pointer to the additional memory. The memory request will normally define the memory characteristics such as read/write access, size, and even its location and attributes such as physical or logical addressing.

The main question that arises is why dynamically allocate memory? Surely this can be done when the tasks are built and included with the operating system? The answer is not straightfor-ward. In simple terms, it is a yes and for many simple embedded systems, this is correct. For more complex systems, however, this static allocation of memory is not efficient, in that memory may be reserved or allocated to a task yet could only be used rarely within the system’s operation. By dynamically allocating memory, the total amount of memory that the system requires for a given function can be reduced by reclaiming and reallocating memory as and when needed by the system software. This will be ex-plained in more detail later on.

The memory characteristics are important to understand especially when different memory addresses correspond to differ-ent physical memory. As a result, asking for a specific block of memory may impact the system performance. For example, con-sider an embedded processor that has both internal and external memory. The internal memory is faster than the external memory and therefore improves performance by not inserting wait states during a memory access. If a task asks for memory expecting to be allocated internal memory but instead receives a pointer to exter-nal memory, the task performance will be degraded and poten-tially the system can fail. This is not a programming error in the true sense of the word because the request code and RTOS have executed correctly. If the request was not specific enough, then the receiving task should expect the worst case type of memory. If it does not or needs specific memory, this should be specified during the request. This is usually done by specifying a memory address or type that the RTOS memory allocation code can check against the memory map file that was used when the system was built.

This is straightforward and defines the access permissions that a task needs to access a memory block.

This is normally concerned with speed and performance issues. The different types of memory are normally defined not by their speed but indirectly through the address loca-tion. As a result, the programmer must define and use a memory map so that the addresses of the required memory block match up the required physical memory and thus its speed. Some RTOSs actually provide simple support flags such as internal/external but this is not common.

The minimum and maximum sizes are system dependent and typically are influenced by the page size of any memory management hardware that may be present. Some systems can return with partial blocks, e.g. if the original request was for 8 kbytes, the RTOS may only have 4 kbytes free and instead of returning an error, will return a pointer to the 4 kbytes block instead. This assumes that the requesting task will check the returned size and not simply assume that because there was no error, it has all the 8 kbytes it re-quested! Check the RTOS details carefully.

This has several implications when using processors that execute instructions out of order to remove pipeline stalls and thus gain performance. Executing instructions that access I/O ports out of sequence can break the program syntax and integrity. The program might output a byte and then read a status register. If this is reversed, the correct sequence has been destroyed and the software will prob-ably crash. By declaring I/O addresses as I/O, the proces-sor can be programmed to ensure the correct sequence whenever these addresses are accessed.

This is similar to the previous paragraph on I/O. I/O addresses should not be cached to prevent data corruption. Shared memory blocks need careful handling with caches and in many cases unless there is some form of bus snoop-ing to check that the contents of a cache is still valid, these areas should also not be cached.

Data caches can have differing coherency policies such as write-through, copy back and so on which are used to ensure the data coherency within the system. Again, the ability to specify or change these policies is useful.

The first example is that commonly used within a simple microcontroller where its address space is split into the different memory types. The example shows three: I/O devices and periph-erals, program RAM and ROM and data RAM. The last two types have then been expanded to show how they could be allocated to a simple embedded system. The program area contains the code for four tasks, the RTOS code and the processor vector table. The data RAM is split into five areas: one for each of the tasks and a fifth area for the stack. In practice, these areas are often further divided into internal and external memory, EPROM and EEPROM, SRAM and even DRAM, depending on the processor architecture and model. This example uses a fixed static memory map where the memory requirements for the whole system are defined at com-pile and build time. This means that tasks cannot get access to additional memory by using some of the memory allocated to another task. In addition, it should be remembered that although the memory map shows nicely partitioned areas, it does not imply nor should it be assumed that task A cannot access task C’s data area, for example. In these simple processors and memory maps, all tasks have the ability to access any memory location and it is only the correct design and programming that ensures that there is no corruption. Hardware can be used to provide this level of protection but it requires some form of memory management unit to check that programs are conforming to their design and not accessing memory that they should not. Memory management is explained in some detail in the next section. 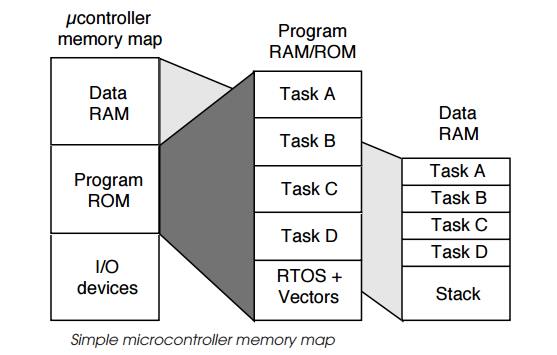 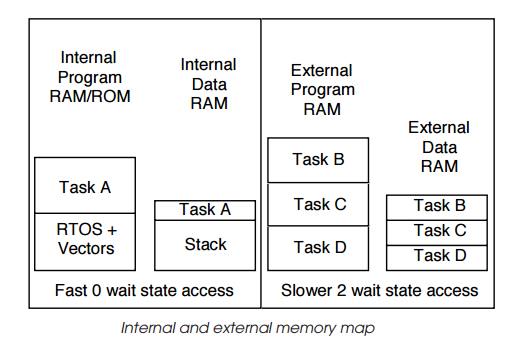 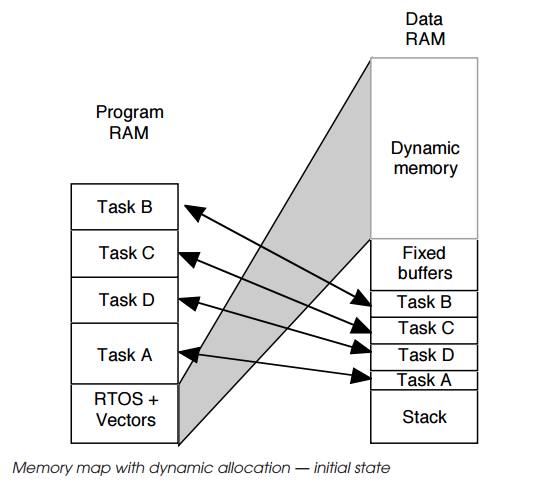 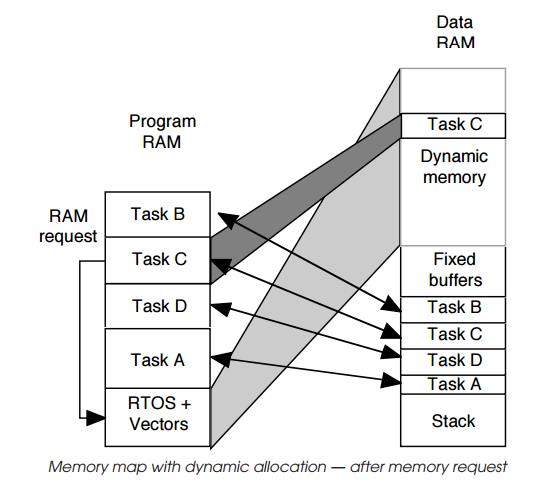 Given this performance difference, it is important that the memory resources are carefully allocated. In the example, task A requires the best performance and the system needs fast task switching. This means that both the task A code and data, along with the RTOS and the system stack, are allocated to the internal memory where it will get the best performance. All other task code and data are stored externally because all the internal memory is used.

The third example shows a dynamic allocation system where tasks can request additional memory as and when they need it. The first map shows the initial state with the basic memory allocated to tasks and RTOS. This is similar to the previous examples except that there is a large amount of memory entitled to dynamic memory which is controlled by the RTOS and can be allocated dynamically by it to other tasks on demand. The next two diagrams show this in operation. The first request by task C starts by sending a request to the RTOS for more memory. The RTOS allocates a block to the task and returns a pointer to it. Task C can use this to get access to this memory. This can be repeated if needed and the next diagram shows task C repeating the request and getting access to a second block. Blocks can also be relin-quished and returned to the RTOS for allocation to other tasks at some other date. This process is highly dynamic and thus can provide a mechanism for minimising memory usage. Task C could be allocated all the memory at certain times and as the memory is used and no longer required, blocks can be reallocated to different tasks. 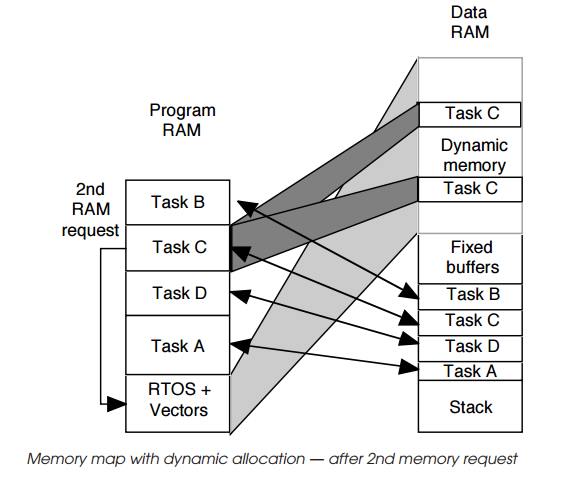 In this section, the use of memory management within an embedded design has been alluded to in the case of protecting memory for corruption. While this is an important use, it is a secondary advantage compared to its ability to reuse memory through address translation. Before returning to the idea of memory protection, let’s consider how address translation works and affects the memory map.