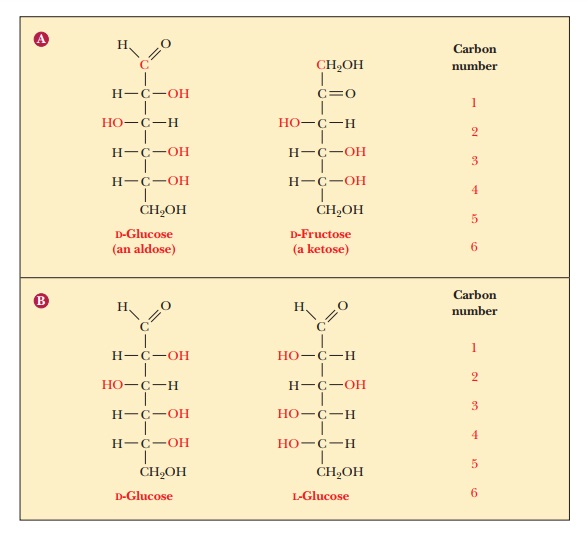 The building blocks of all carbohydrates are the simple sugars called monosaccharides. 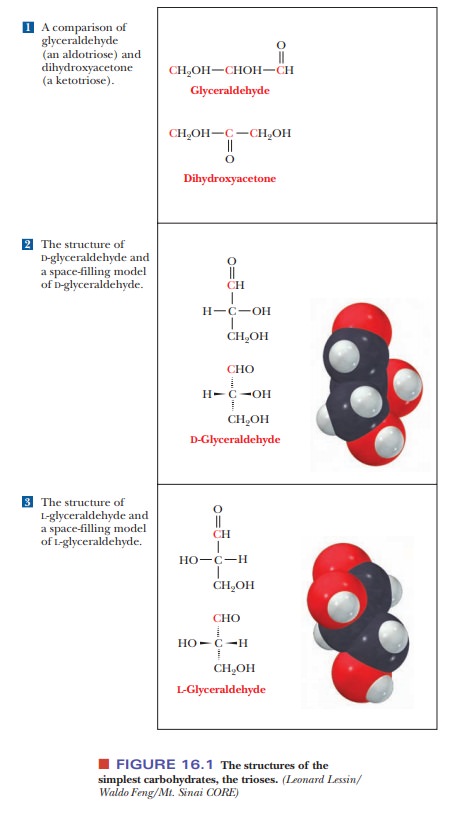 Aldoses with four, five, six, and seven carbon atoms are called aldotetroses, aldopentoses, aldohexoses, and aldoheptoses, respectively. The corresponding ketoses are ketotetroses, ketopentoses, ketohexoses, and ketoheptoses. Six-carbon sugars are the most abundant in nature, but two five-carbon sugars, ribose and deoxyribose, occur in the structures of RNA and DNA, respectively. Four-carbon and seven-carbon sugars play roles in photosynthesis and other metabolic pathways.

We have already seen that some molecules are not super-imposable on their mirror images and that these mirror images are opticalisomers (stereoisomers) of each other. A chiral (asymmetric) carbon atom isthe usual source of optical isomerism, as was the case with amino acids. The simplest carbohydrate that contains a chiral carbon is glyceraldehyde, which can exist in two isomeric forms that are mirror images of each other [Figure 16.1(2) and (3)].

Note that the two forms differ in the position of the hydroxyl group bonded to the central carbon. (Dihydroxyacetone does not contain a chiral carbon atom and does not exist in nonsuperimposable mirror-image forms.) The two forms of glyceraldehyde are designated D-glyceraldehyde and L-glyceraldehyde. Mirror-image stereoisomers are also calledenantiomers,and D-glyceraldehyde and L-glyceraldehyde are enantiomers of each other. Certainconventions are used for two-dimensional drawings of the three-dimensional structures of stereoisomers. The dashed wedges represent bonds directed away from the viewer, below the plane of the paper, and the solid wedges represent bonds directed oppositely, toward the viewer and out of the plane of the paper. The configuration is the three-dimensional arrangement of groups around a chiral carbon atom, and stereoisomers differ from each other in configura-tion. The D,L system to denote stereochemistry is widely used by biochemists. Organic chemists tend to use a more recent one, designated the R,S system. There is not a one-to-one correspondence between the two systems. For exam-ple, some D-isomers are R, and some are S.

The two enantiomers of glyceraldehyde are the only possible stereoisomers of three-carbon sugars, but the possibilities for stereoisomerism increase as the number of carbon atoms increases. To show the structures of the resulting molecules, we need to say more about the convention for a two-dimensional perspective of the molecular structure, which is called the Fischer projection method, after the German chemist Emil Fischer, who established the structures of many sugars. We shall use some common six-carbon sugars for purposes of illustration. In a Fischer projection, bonds written vertically on the two-dimensional paper represent bonds directed behind the paper in three dimen-sions, whereas bonds written horizontally represent bonds directed in front of the paper in three dimensions. Figure 16.2 shows that the most highly oxidized carbon—in this case, the one involved in the aldehyde group—is written at the “top” and is designated carbon 1, or C-1. In the ketose shown, the ketone group becomes C-2, the carbon atom next to the “top.” Most common sugars are aldoses rather than ketoses, so our discussion will focus mainly on aldoses. The other carbon atoms are numbered in sequence from the “top.” The desig-nation of the configuration as L or D depends on the arrangement at the chiral carbon with the highest number. In the cases of both glucose and fructose, this is C-5. In the Fischer projection of the D configuration, the hydroxyl group is on the right of the highest-numbered chiral carbon, whereas the hydroxyl group is on the left of the highest-numbered chiral carbon in the L configuration. Let us see what happens as another carbon is added to glyceraldehyde to give a four-carbon sugar. In other words, what are the possible stereoisomers for an aldotetrose? The aldotetroses (Figure 16.3) have two chiral carbons, C-2 and C-3, and there are 22, or four, possible stereoisomers. 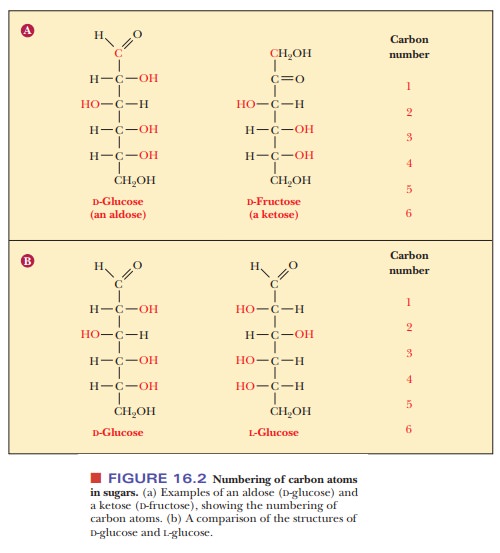 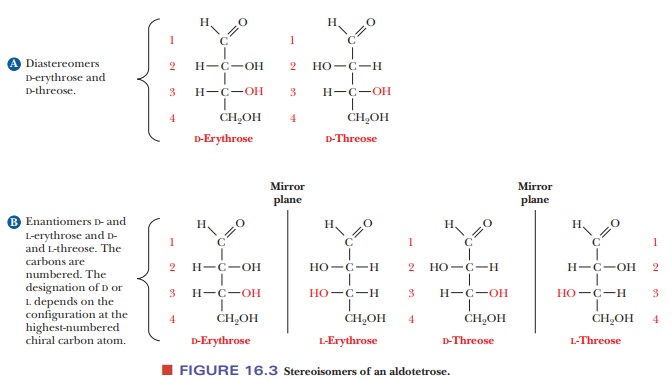 Aldopentoses have three chiral carbons, and there are 23, or 8, possible stereoisomers—four D forms and four L forms. Aldohexoses have four chiral carbons and 24, or 16, stereoisomers—eight D forms and eight L forms (Figure 16.4). Some of the possible stereoisomers are much more common in nature than others, and most biochemical discussion centers on the common, nat-urally occurring sugars. For example, D sugars, rather than L sugars, predomi-nate in nature. Most of the sugars we encounter in nature, especially in foods, contain either five or six carbon atoms. We shall discuss D-glucose (an aldohex-ose) and D-ribose (an aldopentose) far more than many other sugars. Glucose is a ubiquitous energy source, and ribose plays an important role in the struc-ture of nucleic acids. 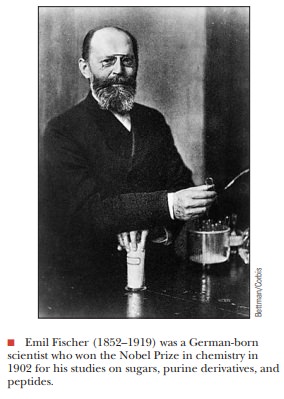 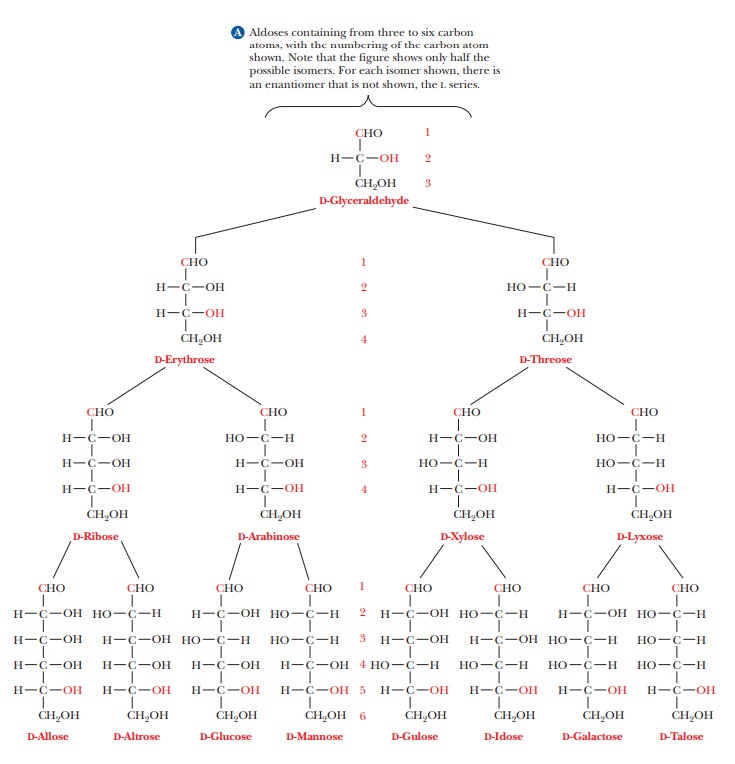