Structures and Functions of Polysaccharides 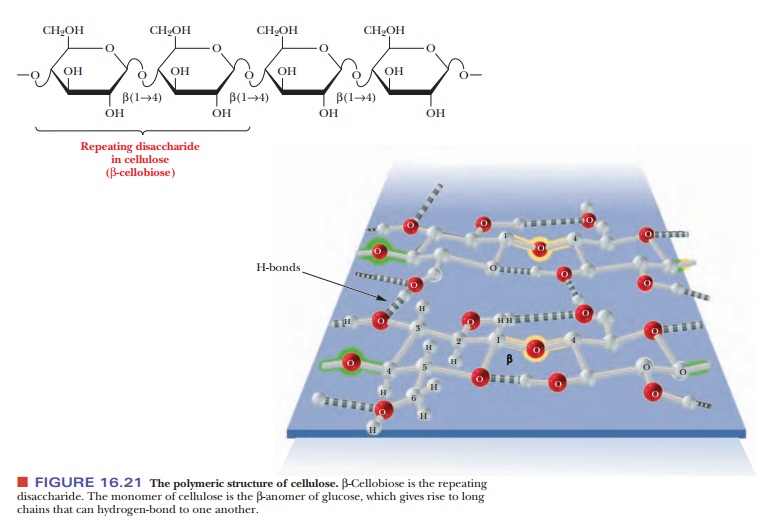 Structures and Functions of Polysaccharides

How do cellulose and starch differ from one another?

Cellulose is the major structural component of plants, especially of wood and plant fibers. It is a linear homopolysaccharide of β-D-glucose, and all residues are linked in β(1 - > 4) glycosidic bonds (Figure 16.21). Individual polysaccharide chains are hydrogen-bonded together, giving plant fibers their mechanical strength. Animals lack the enzymes, called cellulases, that hydrolyze cellulose to glucose. Such enzymes attack the β-linkages between glucoses, which is common to structural polymers; the α-linkage between glucoses, which animals can digest, is characteristic of energy-storage polymers such as starch (Figure 16.22). Cellulases are found in certain bacteria, including the bacteria that inhabit the digestive tracts of insects, such as termites, and grazing animals, such as cattle and horses. The presence of these bacteria explains why cows and horses can live on grass and hay but humans cannot. The damage done by termites to the wooden parts of buildings arises from their ability to use cellulose in wood as a nutrient—owing to the presence of suitable bacteria in their digestive tracts. 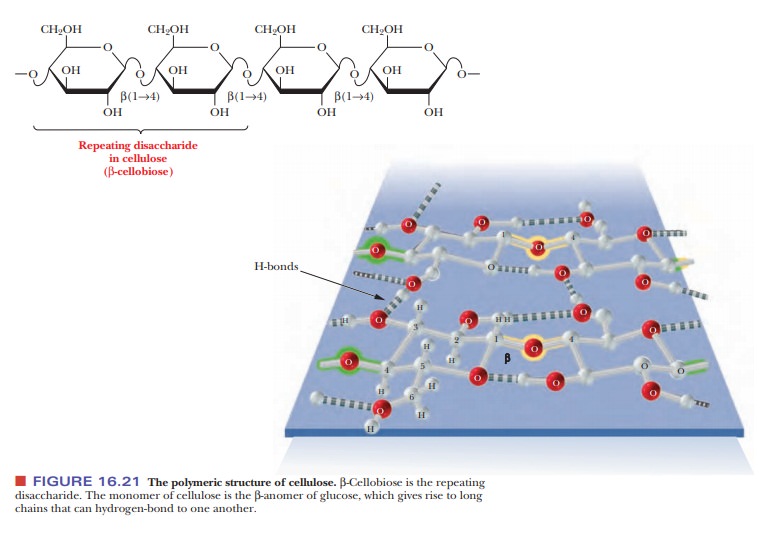 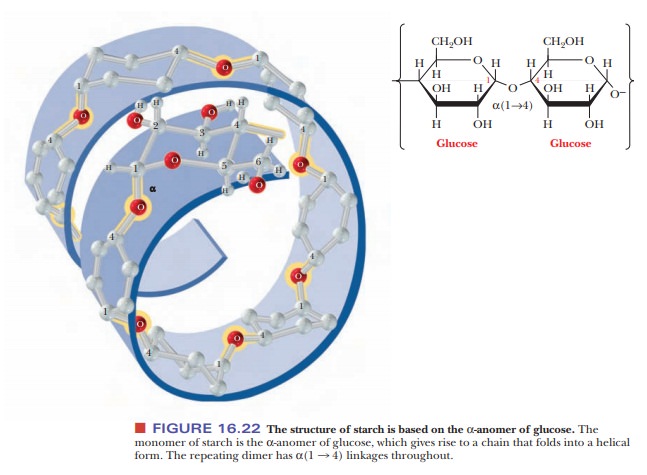 Is there more than one form of starch?

The importance of carbohydrates as energy sources suggests that there is some use for polysaccharides in metabolism. We shall now discuss in more detail some polysaccharides, such as starches, that serve as vehicles for storage of glucose.

Starches are polymers ofα-D-glucose that occur in plant cells, usually as starchgranules in the cytosol. Note that there is anα-linkage in starch, in contrast with the β-linkage in cellulose. The types of starches can be distinguished from one another by their degrees of chain branching. Amylose is a linear polymer of glu-cose, with all the residues linked together by α(1 - > 4) bonds. Amylopectin is a branched chain polymer, with the branches starting at α(1 - > 6) linkages along the chain of α(1 - > 4) linkages (Figure 16.23). The most usual conformation of amylose is a helix with six residues per turn. Iodine molecules can fit inside the helix to form a starch–iodine complex, which has a characteristic dark-blue color (Figure 16.24). The formation of this complex is a well-known test for the pres-ence of starch. If there is a preferred conformation for amylopectin, it is not yet known. (It is known that the color of the product obtained when amylopectin and glycogen react with iodine is red-brown, not blue.) 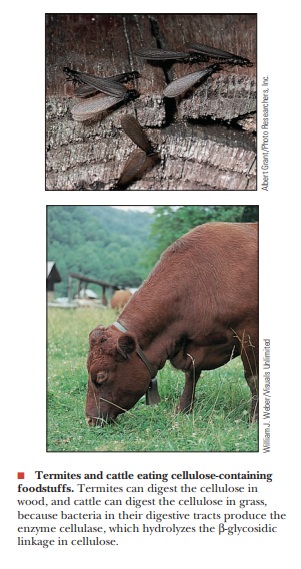 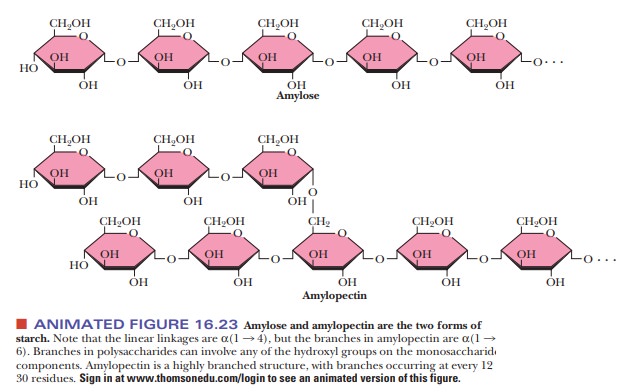 Because starches are storage molecules, there must be a mechanism for releasing glucose from starch when the organism needs energy. Both plants and animals contain enzymes that hydrolyze starches. Two of these enzymes, known as α- and β-amylase (the α and β do not signify anomeric forms in this case), attack α(1 - > 4) linkages. β-amylase is an exoglycosidase that cleaves from the nonreducing end of the polymer. Maltose, a dimer of glucose, is the prod-uct of reaction. The other enzyme, α-amylase, is an endoglycosidase, which can hydrolyze a glycosidic linkage anywhere along the chain to produce glucose and maltose. Amylose can be completely degraded to glucose and maltose by the two amylases, but amylopectin is not completely degraded because the branching linkages are not attacked.

However, debranching enzymes occur in both plants and animals; they degrade the α(1 - > 6) linkages. When these enzymes are combined with the amylases, they contribute to the complete deg-radation of both forms of starch.

How is glycogen related to starch?

Although starches occur only in plants, there is a similar carbohydrate storage polymer in animals. Glycogen is a branched-chain polymer of α-D-glucose, and in this respect it is similar to the amylopectin fraction of starch. Like amylopectin, glycogen consists of a chain of α(1 - > 4) linkages with α(1 - > 6) linkages at the branch points. The main difference between glycogen and amylopectin is that glycogen is more highly branched (Figure 16.25). Branch points occur about every 10 residues in glycogen and about every 25 residues in amylopectin. In glycogen, the average chain length is 13 glucose residues, and there are 12 layers of branching. At the heart of every glycogen molecule is a protein called glycogenin. Glycogen is found in animal cells in granules similar to the starch granules in plant cells. Glycogen granules are observed in well-fed liver and muscle cells, but they are not seen in some other cell types, such as brain and heart cells under normal conditions. Some athletes, particularly long-distance runners, try to build up their glycogen reserves before a race by eating large amounts of carbohydrates. When the organism needs energy, various degradative enzymes remove glucose units. Glycogen phosphorylase is one such enzyme; it cleaves one glucose at a time from the nonreducing end of a branch to produce glucose-1-phosphate, which then enters the metabolic pathways of carbohydrate breakdown. Debranching enzymes also play a role in the complete breakdown of glycogen. The number of branch points is significant for two reasons. First, a more branched polysaccharide is more water soluble. This may not be as important for a plant, but, for a mammal, the amount of glycogen in solution is. There are glycogen-storage diseases caused by lower-than-normal levels of branching enzymes. The glycogen products resemble starch and can fall out of solution, forming glycogen crystals in the muscles and liver. 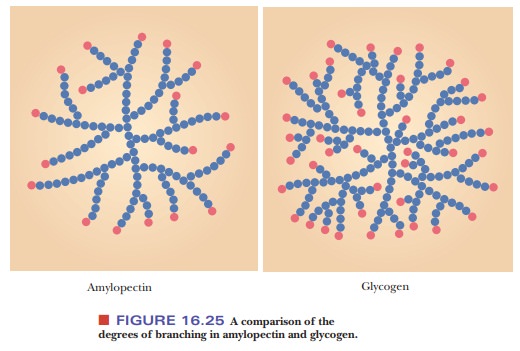 Second, when an organism needs energy quickly, the glycogen phosphorylase has more potential targets if there are more branches, allowing a quicker mobilization of glucose. Again, this is not as important to a plant, so there was no evolutionary pressure to make starch highly branched.

A polysaccharide that is similar to cellulose in both structure and function is chitin, which is also a linear homopolysaccharide with all the residues linked in β(1 - > 4) glycosidic bonds. Chitin differs from cellulose in the nature of the monosaccharide unit; in cellulose, the monomer is β-D-glucose; in chitin, the monomer is N-acetyl-β-D-glucosamine. The latter compound differs from glucose only in the substitution of the N-acetylamino group (—NH—CO—CH3) for the hydroxyl group (—OH) on carbon C-2 (Figure 16.26). Like cellulose, chitin individual strands are held together by hydrogen bonds. It is a major structural component of the exoskeletons of invertebrates such as insects and crustaceans (a group that includes lobsters and shrimp), and it also occurs in cell walls of algae, fungi, and yeasts. 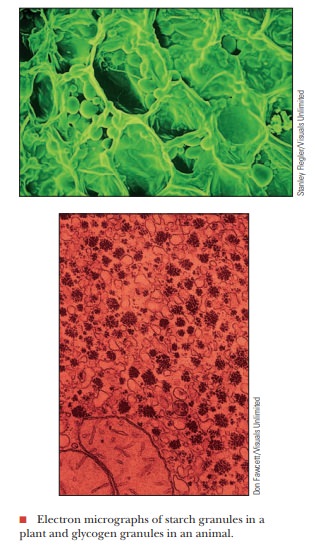 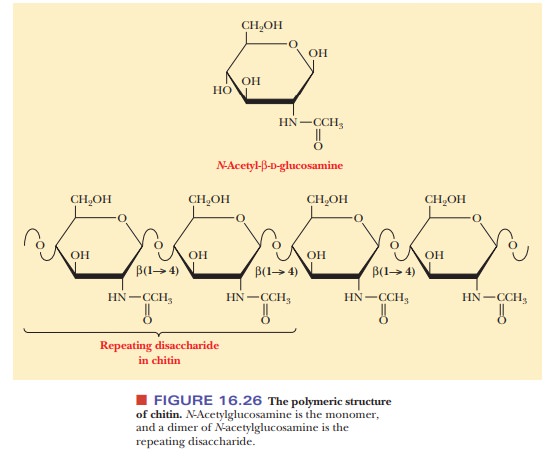 What role do polysaccharides play in the structure of cell walls? 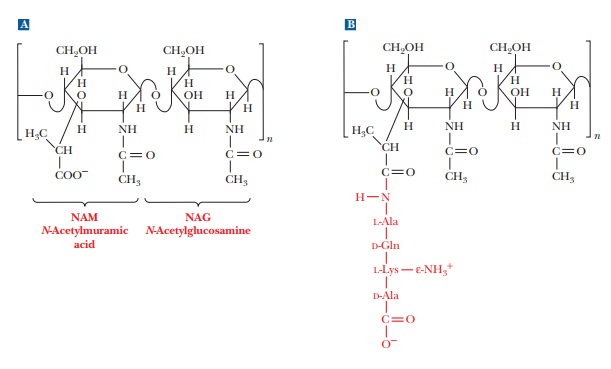 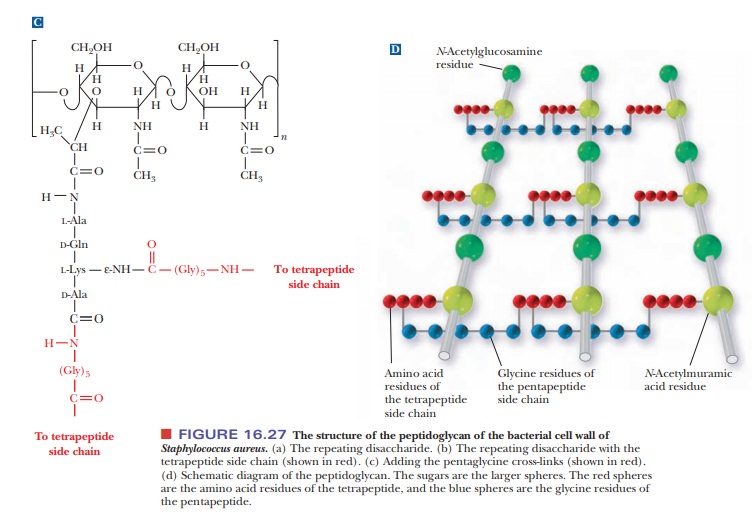 The cross-links in bacterial cell walls consist of small peptides. We shall use one of the best-known examples as an illustration. In the cell wall of the bacterium Staphylococcus aureus, an oligomer of four amino acids (a tetramer) is bonded to N-acetylmuramic acid, forming a side chain (Figure 16.27b). The tetrapeptidesare themselves cross-linked by another small peptide, in this case consisting of five amino acids.

The carboxyl group of the lactic acid side chain of N-acetylmuramic acid forms an amide bond with the N-terminal end of a tetrapeptide that has the sequence L-Ala-D-Gln-L-Lys-D-Ala. Recall that bacterial cell walls are one of the few places where D-amino acids occur in nature. The occurrence of D-amino acids andN-acetylmu-ramic acid in bacterial cell walls but not in plant cell walls shows a biochemical as well as structural difference between prokaryotes and eukaryotes.

The tetrapeptide forms two cross-links, both of them to a pentapeptide that consists of five glycine residues, (Gly)5. The glycine pentamers form peptide bonds to the C-terminal end and to the side-chain ε-amino group of the lysine in the tetrapeptide [Figure 16.27(c)]. This extensive cross-linking produces a three-dimensional network of considerable mechanical strength, which is why bacterial cell walls are extremely difficult to disrupt. The material that results from the cross-linking of polysaccharides by peptides is a peptidoglycan [Figure 16.25(d)], so named because it has both peptide and carbohydrate components.

Plant cell walls consist largely ofcellulose.The other important polysaccha-ride component found in plant cell walls is pectin, a polymer made up mostly of D-galacturonic acid, a derivative of galactose in which the hydroxyl group on carbon C-6 has been oxidized to a carboxyl group. 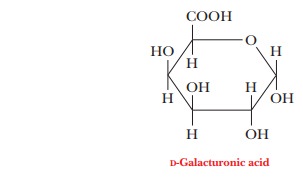 Pectin is extracted from plants because it has commercial importance in the food-processing industry as a gelling agent in yogurt, fruit preserves, jams, and jellies. The major nonpolysaccharide component in plant cell walls, especially in woody plants, is lignin (Latin lignum, “wood”). Lignin is a polymer of coniferyl alcohol, and it is a very tough and durable material (Figure 16.28). Unlike bacterial cell walls, plant cell walls contain comparatively little peptide or protein. 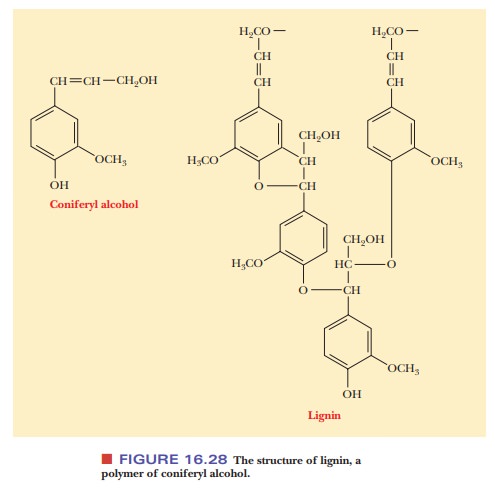 Do polysaccharides play any specific roles in connective tissue?

Glycosaminoglycans are a type of polysaccharide based on a repeating disaccharidein which one of the sugars is an amino sugar and at least one of them has a negative charge owing to the presence of a sulfate group or a carboxyl group. These polysaccharides are involved in a wide variety of cellular functions and tissues. Figure 16.29 shows the disaccharide structure of the most common ones. Heparin is a natural anticoagulant that helps prevent blood clots. Hyaluronic acid is a component of the vitreous humor of the eye and of the lubricating fluid of joints. The chondroitin sulfates and keratan sulfate are components of connective tissue. Glucosamine sulfate and chondroitin sulfate are sold in large quantities as over-the-counter drugs used to help repair frayed or otherwise damaged cartilage, especially in knees. Many people who are advised that they need knee surgery for damaged ligaments look for improvement first with a two- or three-month regimen of these glycosaminoglycans. Questions exist about the efficacy of this treatment, so it will be interesting to see what future it may have.

FIGURE 16.29 Glycosaminoglycans, which are formed from repeating disaccharide units, often occur as components of the proteoglycans.

Polysaccharides are formed by linking monomeric sugars through glyco-sidic linkages.

Starch and glycogen are energy-storage polymers of sugars.

Cellulose and chitin are structural polymers.

Polysaccharides are important components of cell walls in bacteria and plants.