1. Colour and shape Monosaccharides are colourless and crystalline compounds.

Monosaccharides are colourless and crystalline compounds.

They are readily soluble in water.

They have sweet tase.

D-glucose and L-glucose are mirror images of each other. 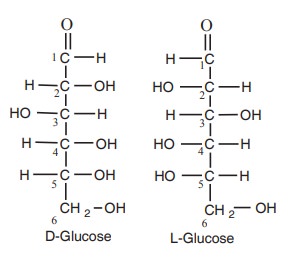 The presence of asymmetric carbon atoms in a compound give rise to the formation of isomers of that compound. Such compound which are identical in composition and differs only in spatial configuration are called “stereo isomers’’. For example glucose can exist in two forms as shown below.

The orientation of the H and OH groups around the carbon atom just adjacent to the terminal primary alcohol carbon, eg. C5 in glucose determines the series. The D and L forms of glyceraldehyde are given below.

Polarimeter is an instrument by which the specific rotations of optical isomers are detected. 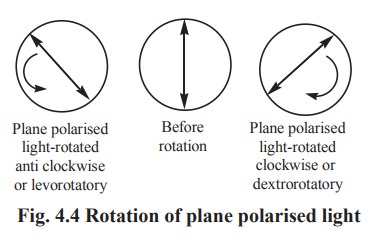 When equal amounts of dextrorotatory and levorotatory isomers are present, the resulting mixture has no optical activity, since the activities of isomers cancel each other. Such a mixture is said to be a “racemic mixture”.

The separation of optically active isomers from a racemic mixture is called resolution.

When an aldohexose is first dissolved in water and the solution is kept in optical path and plane polarised light is passed, the initial optical rotation shown by the sugar gradually changes until a constant fixed rotation characteristic of the sugar is reached. This phenomenon of change of rotation is called as “Mutarotation”. 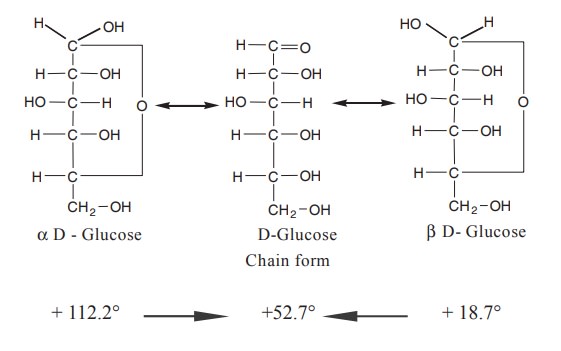 α and β isomers are called as anomers and the carbon atom responsible for this is the anomeric carbon atom. Anomers are isomers differing in configuration of a particular carbon atom alone.

A freshly prepared solution of b, D glucose has a rotation value of 18.7°. It also gradually increases and reaches the same final value of + 52.7°.