Maltose is composed of two glucose molecules combined by a- 1,4 glycosidic linkage. It is commonly called malt sugar. Malt from sprouting barley is the major source of maltose. It is a rather sweet sugar and is highly soluble in water. 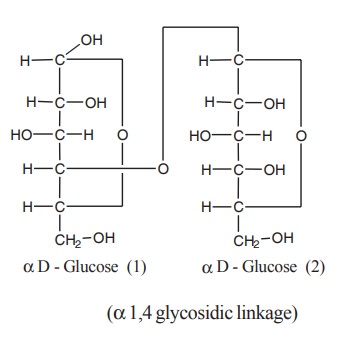 Lactose is commonly called as milk sugar. It is present in the milk of mammals. However lactose is found in the urine of pregnant and lactating women. It is less soluble in water and less sweeter than sucrose. 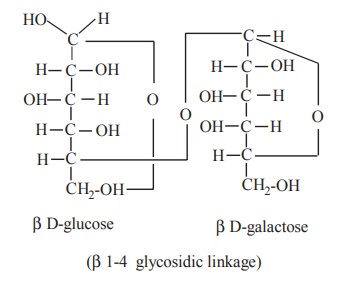 When lactose is hydrolysed by acids or by the enzyme lactase, one molecule of glucose and one molecule of galactose are formed. The intestine of milk sucking infants has the enzyme lactase, which converts lactose into glucose and galactose. Then only it is absorbed in the body. Excess of lactose ingested into the body causes diarrhoea, abnormal intestinal flow and colic pain. Lactose is not fermented by yeast.

Sucrose is ordinary “table sugar”. It is also called as “cane sugar” as it can be obtained from sugar cane. It is widely distributed in sugar cane, beet root, pine apple, honey, carrot and ripe fruits. 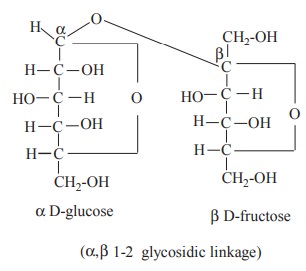 Sucrose on hydrolysis by dilute acids or the enzyme sucrase or invertase gives a mixture of glucose and fructose. It is called as invert sugar.

Sucrose is dextrorotatory (+62.5°) but it’s hydrolytic products are levorotatory because fructose has a greater specific levo-rotation than the dextrorotation of glucose. As the hydrolytic products inverts the rotation, sucrose is known as invert sugar and the process is called as invertion. Honey contains plenty of ‘invert sugar’ and the presence of fructose accounts for the greater sweetness of honey.