Glucose reacts with methanol in the presence of HCl and gives α and β glucoside.

Glucoside formation is due to the reaction of alcohol with glucoside -OH group of glucose. 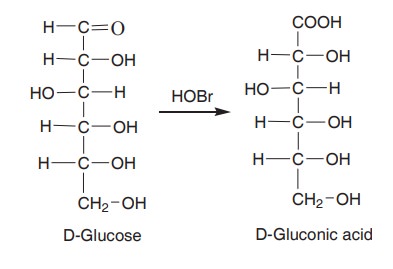 When glucose is oxidised with nitric acid, saccharic acid is formed. 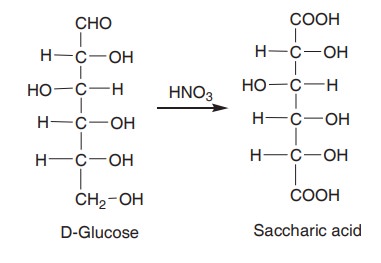 When glucose is oxidised with hydrogen peroxide (H2O2), glucuronic acid is formed. 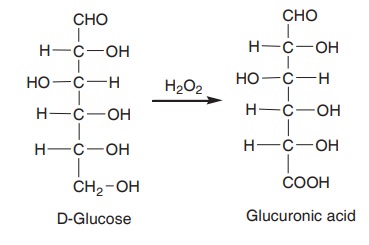 In this reaction only the primary alcohol is converted into carboxylic group, whereas the aldehyde remains unchanged.

Monosaccharides can be reduced by various reducing agents such as sodium-amalgam or by hydrogen under high pressure in the presence of catalysts. The reduction is due to the presence of aldehyde or ketone group. On reduction they yield alcohols. 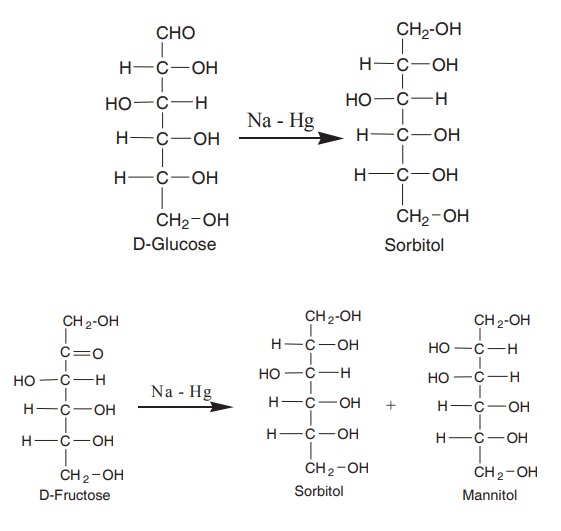 When glucose is reduced by sodium amalgam, sorbitol is formed. Mannose yeilds mannitol and fructose yeilds a mixture of sorbitol and mannitol because of the formation of new asymmetric carbon C2 of fructose.

Glucose is treated with concentrated H2SO4 or HCl, and forms 5, hydroxymethyl furfural which on further heating yields levulinic acid and formic acid. 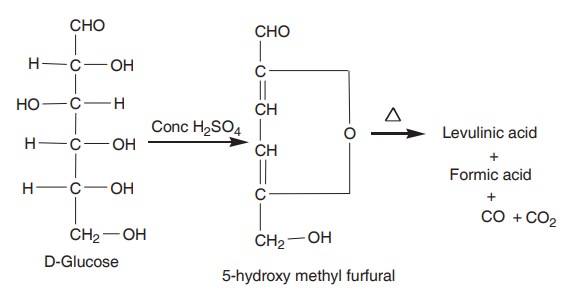 This reaction is the basis of the colour test, known as Molish test for sugars. When pentoses are treated with mineral acids furfural is obtained on heating.

They can form esters with carboxylic acids due to the presence of OH groups. For eg. glucose reacts with five molecules of acetic anhydride to form penta acetate derivative. It obviously indicates that the glucose contain five OH groups.

Monosaccharides act as the best reducing agents. They readily reduce oxidizing agents such as ferric cyanide, H2O2 and cupric ion. In such reactions, the sugar is oxidized at the carbonyl group and the oxidising agent becomes reduced. 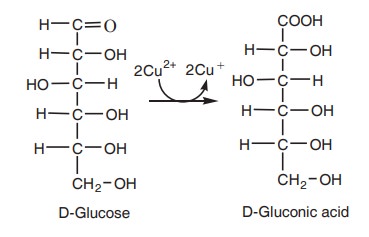 This property is the basis of Fehling’s reaction (ammoniacal cupric sulphate), a qualitative test for the presence of reducing sugar.

Cu2+ is reduced into Cu+ and at the same time glucose is oxidised to gluconic acid. During this reaction the blue colour of the reagent changes to reddish orange colour. Benedict’s reagent contains cupric ions which are reduced to cuprous ions by the reducing sugar and the colour change from blue to orange or red. It indicates the presence of reducing sugar.

A standard test for the presence of reducing sugar is the reduction of Ag+ in ammonia solution (Tollen’s reagent) to yield a metallic silver mirror lining on the sides of the test tube. 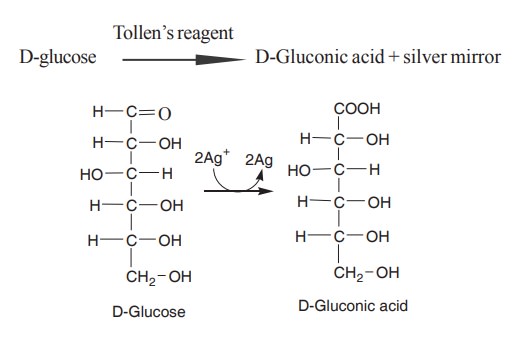 The aldehyde group of glucose condenses with the amino group of alanine to form Schiff’s base. Fructose also gives Schiff’s base with alanine. 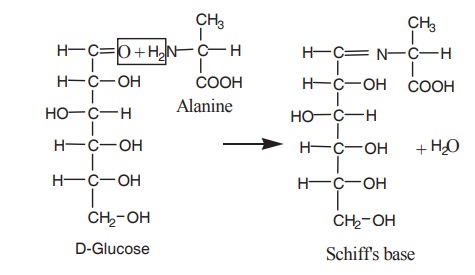 An important reaction of reducing sugars, (monosaccharide and disaccharrides) having potential aldehyde or ketone group, is their action with phenylhydrazine to form phenyl hydrazones.

Reaction with phenylhydrazine involves only 2 carbon atoms namely the carbonyl carbon atom and the adjacent one.

The steps involved in phenylhydrazine reactions are

3. Now the third molecule of phenylhydrazine enters the reaction, giving rise to phenyl glucosazone which are yellow coloured crystals.

The shape of the crystals and the time of formation of osazone differ for various sugars.

The reaction of phenyl hydrazine with fructose is similar to glucose. Here again 3 molecules of phenyl hydrazine take part in the reaction. Fructose gives fructosazone. Disaccharides such as maltose and lactose also exhibit the property of osazone formation. But, sucrose does not form osazone, since it does not contain free CHO or CO groups which are responsible for the reducing property.

Fermentation is the process of converting a larger complex molecule into simple molecules by means of enzymes in an anaerobic condition. The products of the reaction are alcohol and CO2.

eg : Glucose and mannose are epimers in respect of C2. Glucose and galactose differ only with respect to C4. The process by which one epimer is converted to other is called as epimerization and it requires the enzyme epimerases in the living organisms. Galactose is converted to glucose by this manner in our body. 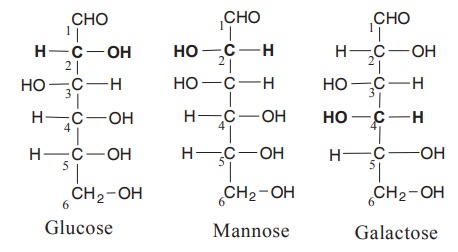