What are some oxidation–reduction reactions of sugars?

Oxidation and reduction reactions of sugars play key roles in biochemistry. Oxidation of sugars provides energy for organisms to carry out their life processes; the highest yield of energy from carbohydrates occurs when sugars are completely oxidized to CO2 and H2O in aerobic processes. The reverse of complete oxidation of sugars is the reduction of CO2 and H2O to form sugars, a process that takes place in photosynthesis.

Several oxidation reactions of sugars are of some importance in laboratory practice because they can be used to identify sugars. Aldehyde groups can be oxidized to give the carboxyl group that is characteristic of acids, and this reac-tion is the basis of a test for the presence of aldoses. When the aldehyde is oxi-dized, some oxidizing agent must be reduced. Aldoses are called reducing sugars because of this type of reaction; ketoses can also be reducing sugars because they isomerize to aldoses. In the cyclic form, the compound produced by oxidation of an aldose is a lactone (a cyclic ester linking the carboxyl group and one of the sugar alcohols, as shown in Figure 16.9). 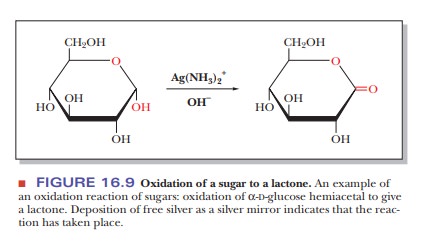 Two types of reagent are used in the laboratory to detect the presence of reducing sugars. The first of these is Tollens reagent, which uses the silver ammonia complex ion, Ag(NH3)2+, as the oxidizing agent. A silver mirror is deposited on the wall of the test tube if a reducing sugar is present, as a result of the Ag+ in the complex ion being reduced to free silver metal (Figure 16.10). A more recent method for detection of glucose, but not other reducing sugars, is based on the use of the enzyme glucose oxidase, which is specific for glucose. 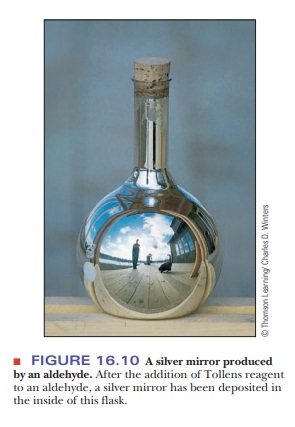 In addition to oxidized sugars, there are some important reduced sugars. In deoxy sugars, a hydrogen atom is substituted for one of the hydroxyl groups of thesugar. One of these deoxy sugars is L-fucose (L-6-deoxygalactose), which is found in the carbohydrate portions of some glycoproteins (Figure 16.11), including the ABO blood-group antigens. The name glycoprotein indicates that these substances are conjugated proteins that contain some carbohydrate group (glykos is Greek for “sweet”) in addition to the polypeptide chain. An even more important exam-ple of a deoxy sugar is D-2-deoxyribose, the sugar found in DNA (Figure 16.11).

When the carbonyl group of a sugar is reduced to a hydroxyl group, the resulting compound is one of the polyhydroxy alcohols known as alditols. Two compounds of this kind, xylitol and sorbitol, derivatives of the sugars xylulose and sorbose, respectively, have commercial importance as sweeteners in sugar-less chewing gum and candy.

What are some important esterification reactions of sugars?

The hydroxyl groups of sugars behave exactly like all other alcohols in the sense that they can react with acids and derivatives of acids to form esters. The phosphate esters are particularly important because they are the usual intermediates in the breakdown of carbohydrates to provide energy. Phosphate esters are frequently formed by transfer of a phosphate group from ATP (adenosine triphosphate) to give the phosphorylated sugar and ADP (adenosine diphosphate), as shown in Figure 16.12. Such reactions play an important role in the metabolism of sugars.

What are glycosides, and how do they form?

It is possible for a sugar hydroxyl group (ROH) bonded to the anomeric carbon to react with another hydroxyl (R'—OH) to form a glycosidic linkage (R'—O— R). A glycosidic linkage is not an ether (the R'—O—R notation is misleading) because glycosides can be hydrolyzed to the original alcohols.

This type of reaction involves the anomeric carbon of the sugar in its cyclic form. (Recall that the anomeric carbon is the carbonyl carbon of the open-chain form of the sugar and is the one that becomes a chiral center in the cyclic form.) Stated in a slightly different way, a hemiacetal carbon can react with an alcohol such as methyl alcohol to give a full acetal, or glycoside (Figure 16.13). The newly formed bond is called a glycosidic bond. Glycosides derived from furanoses are called furanosides, and those derived from pyranoses are called pyranosides. 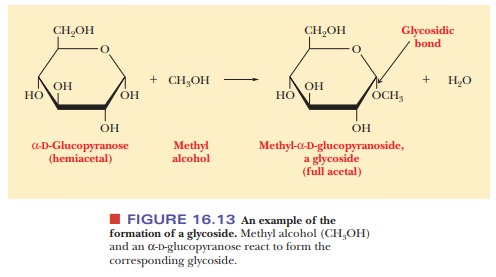 Glycosidic bonds between monosaccharide units are the basis for the for-mation of oligosaccharides and polysaccharides. Glycosidic linkages can take various forms; the anomeric carbon of one sugar can be bonded to any one of the —OH groups on a second sugar to form an α- or β-glycosidic linkage. Many different combinations are found in nature. The —OH groups are numbered so that they can be distinguished, and the numbering scheme follows that of the carbon atoms. The notation for the glycosidic linkage between the two sug-ars specifies which anomeric form of the sugar is involved in the bond and also specifies which carbon atoms of the two sugars are linked together. Two ways in which two α-D-glucose molecules can be linked together are α(1 - > 4) and α(136). In the first example, the α-anomeric carbon (C-1) of the first glucosemolecule is joined in a glycosidic bond to the fourth carbon atom (C-4) of the second glucose molecule; the C-1 of the first glucose molecule is linked to the C-6 of the second glucose molecule in the second example (Figure 16.14). Another possibility of a glycosidic bond, this time between two β-D-glucose mol-ecules, is a β,β(1 - > 1) linkage. The anomeric forms at both C-1 carbons must be specified because the linkage is between the two anomeric carbons, each of which is C-1 (Figure 16.15). 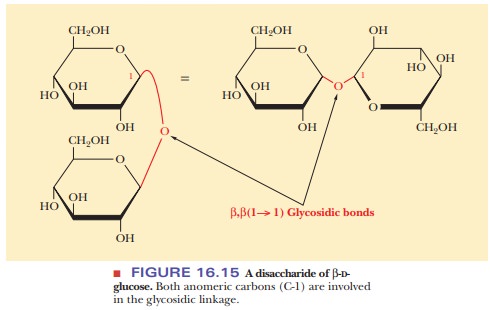 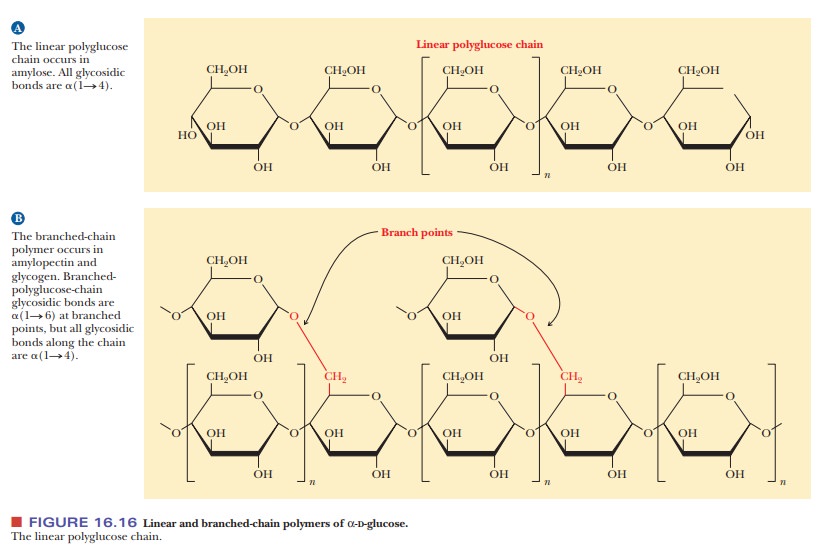 Another point about glycosides is worth mentioning. We have already seen that the anomeric carbon is frequently involved in the glycosidic linkage, and also that the test for the presence of sugars—specifically for reducing sug-ars—requires a reaction of the group at the anomeric carbon. The internal anomeric carbons in oligosaccharides are not free to give the test for reduc-ing sugars. Only if the end residue is a free hemiacetal rather than a glycoside will there be a positive test for a reducing sugar (Figure 16.17). The level of detection can be important for such a test. A sample that contains only a few molecules of a large polysaccharide, each molecule with a single reducing end, might well produce a negative test because there are not enough reducing ends to detect. 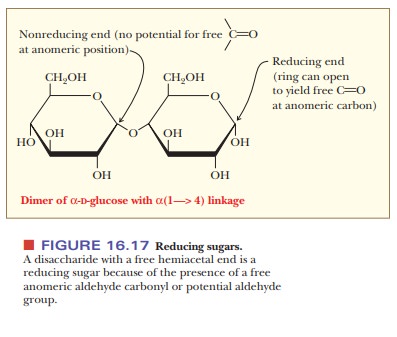 What are some other important derivatives of sugars?

Amino sugars are an interesting class of compounds related to themonosaccharides. We shall not go into the chemistry of their formation, but it will be useful to have some acquaintance with them when we discuss polysaccharides.

In sugars of this type, an amino group (—NH2) or one of its derivatives is substituted for the hydroxyl group of the parent sugar. In N-acetyl amino sugars, the amino group itself carries an acetyl group (CH3—CO—) as a substituent. 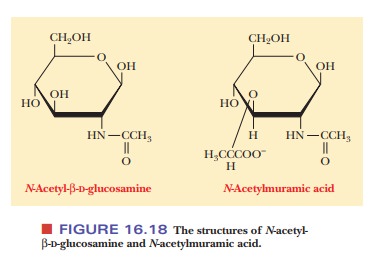 Two particularly important examples are N-acetyl-β-D-glucosamine and its derivative N-acetyl-β-muramic acid, which has an added carboxylic acid side chain (Figure 16.18). These two compounds are components of bacterial cell walls. We did not specify whether N-acetylmuramic acid belongs to the L or the D series of configurations, and we did not specify theα- orβ-anomer. This typeof shorthand is the usual practice with β-D-glucose and its derivatives; the D con-figuration and the β-anomeric form are so common that we need not specify them all the time unless we want to make some specific point. The position of the amino group is also left unspecified because discussion of amino sugars usually centers on a few compounds whose structures are well known.

Sugars can and do undergo oxidation reactions, as well as forming esters.