Polysaccharides, which are also known as glycans composed of number of monosccharide units.

This is the storage form of carbohydrate present in plants. They are abundantly found in root, stem, vegetables, fruits and cereals. The bulk of our diet which consists mainly of rice, wheat and vegetables is good source of starch.

Starch occurs in the forms of grain which may be spherical or oval in shape. Microscopically, the starch grains are found to differ in size and shape according to their sources (Fig.4.7).

Starch is made up of two structurally different homopolysaccharide units. They are amylose and amylopectin.

Amylose has 1,4 glycosidic linkages. The glycosidic - OH group of C1 in one glucose unit is joined to that of C4 of the next unit (Fig 4.8).

The glucose unit present at each point of branching has subtituents at carbon atoms 1,4 and 6 i.e it has three points of attachment (Fig.4.9).

Reaction of starch with iodine

A solution of starch react with iodine to give blue colour. The blue colour formation is mainly due to the presence of amylose in starch.

Digestion of starch, the main carbohydrate source in the human diet, begins in the mouth. Saliva contains α amylase, which randomly hydrolyses all the a, 1-4 glycosidic bonds of starch except its outer most bonds and those next to branches.By the time thoroughly chewed food reaches the stomach, where the acidity inactivates a-amylase, the average chain length of starch has been reduced from several thousand to fewer than eight glucose units.

Glycogen is a homopolysaccharide since it gives only glucose units on hydrolysis. It is the major reserve carbohydrate in animals. Glycogen is present in all cells of skeletal muscle and liver and occur as cytoplasmic granules. Among plants, it is found in fungi and yeast. Primary structure of glycogen resembles that of amylopectin but glycogen is more highly branched, with branch points occurring every 8 to 12 glucose residues (Fig. 4.10). Glycogen is readily available as immediate source of energy. During starvation glycogen is mobilised from the storage tissue and converted to glucose by the enzyme glycogen phosphorylase. Glucose formed like this is oxidised to produce energy. The degree of branching is considerably more in glycogen when compared to starch. 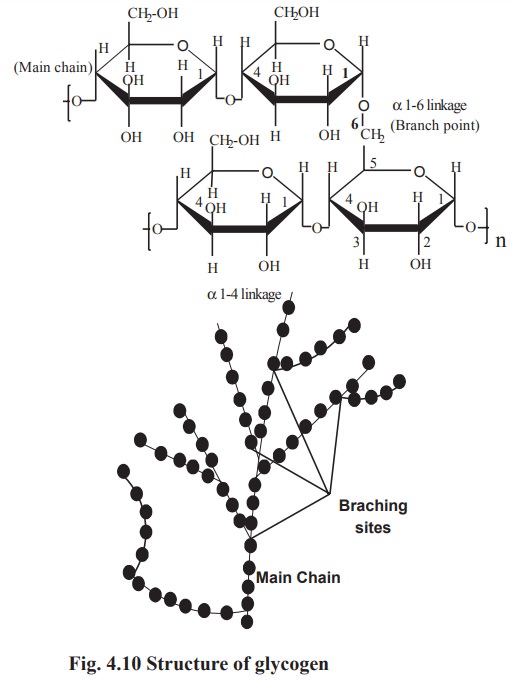