Approximately 3.5–4 million years ago the Bering Strait opened and allowed a cold temperate waterway between the North Pacific and North Atlantic basins, as indicated by paleontology and geology (Vermeij 1991).

Transarctic interchange between the North Pacific and North Atlantic

Approximately 3.5–4 million years ago the Bering Strait opened and allowed a cold temperate waterway between the North Pacific and North Atlantic basins, as indicated by paleontology and geology (Vermeij 1991). This opening persisted for more than half a million years and colonization proceeded in both directions, but with most movement of fishes from the highly diverse Northeast Pacific to the relatively depauperate Atlantic (Briggs 1970). The directionality of exchange is usually inferred from the fossil record, which shows that hundreds of species moved from the Northwest Pacific into the Atlantic. The initial interchange has been followed by perhaps three more openings of lesser duration and impact, including one event about 2 million years ago, and one after the last glacial period (<12,000 years ago) (Nikula et al. 2007).

The number of management units and evolutionary significant units (ESUs) within each species of salmon on the West coast of the United States. Note that management units can be defined with ecology and life history, as well as shallow population genetic structure. The higher level designation of ESU requires deep population structure or other evidence of evolutionary divergence. From Waples et al. (2001).

Several widespread and abundant Atlantic fishes are the product of this Pacific invasion. The Atlantic Herring (Clupea harengus) is distinguished from the Pacific Herring (C. pallasi) in allozyme surveys, indicating a separation time of 3.6–6.6 million years (Grant 1986).

One important invasion may have occurred in the other direction: molecular clock estimates for allozymes and mtDNA indicate that Atlantic salmon (genus Salmo) invaded the Pacific during this interval, giving rise to the Pacific salmon genus Oncorhynchus (Kitano et al. 1997). For the anadromous and freshwater smelts (Osmerusspp.), mtDNA data indicate an exchange approximately 2–2.5 mybp, possibly linked to the second opening of the transarctic waterway (Taylor & Dodson 1994).

Regardless of the direction of exchange, it is clear that the transarctic interchange had a tremendous effect on biodiversity, especially in the North Atlantic. Genetic assays with allozymes and mtDNA complement the paleontological investigations, to provide a relatively complete picture of this great natural invasion.

The Isthmus of Panama eliminated contact between the Atlantic and Pacific about 3.5 mybp. This is an impassable barrier except for marine species that can tolerate the freshwater conditions of the Panama Canal (built by the United States and opened in 1914), such as the Atlantic Tarpon (Megalops atlanticus; McCosker & Dawson 1975). A number of studies have compared sister species across this barrier, first with allozymes and later with mtDNA, and these comparisons have been especially useful for calibrating molecular clocks against a reliable geological event (Lessios 1979; Bermingham et al. 1997). For example, the genetic differentiation between Atlantic and Pacific trumpetfishes (genus Aulostomus) fits a timeframe for the establishment of the Panama barrier.

Southern Africa is another barrier to tropical species, where warm waters of the Indian Ocean (Agulhas Current) collide with cold upwelling in the South Atlantic (Benguela Current). However, the barrier is not absolute. Contemporary dispersal may be possible in warm-core gyres from the Indian Ocean that occasionally cross the frigid Benguela Current and transport tropical species into the Atlantic, as indicated by the occasional arrival of Indian Ocean biota at the island of St. Helena in the South Atlantic (Edwards 1990).

In addition to the trumpetfish example, several studies have demonstrated colonization events from the Indian to Atlantic oceans. In the Blue Marlin (Makaira nigricans), Buonaccorsi et al. (2001) report two divergent mtDNA lineages. One lineage is restricted to the Atlantic, the other occurs in both the Atlantic and Indian-Pacific. Apparently Blue Marlin populations in the two ocean basins were isolated for an extended period, followed by a rare colonization of the Indian-Pacific lineage into the Atlantic. Molecular clock estimates put the initial Atlantic–Indian divergence at about 600,000 years ago.

A neighbor joining tree (A) and parsimony network (B) based on mtDNA cytochrome b, showing the relationships among trumpetfish species across the range of genus Aulostomus. The scale indicates 1% sequence divergence. The data indicate a 3–4-million-year-old separation between West Atlantic (A. maculatus; haplotypes AM-1 and AM-2) and Indian-Pacific (A. chinensis; haplotypes AC-1 to AC-8) species, followed by approximately a 2.5-million-year separation between the Indian-Pacific and the East Atlantic species (A. strigosus; haplotypes AST-1 to AST-3). These separations correspond to major vicariant events separating the tropical fauna of each ocean basin (see text). From Bowen et al. (2001), used with permission.

The goby genus Gnatholepis contains a single Atlantic member, the Goldspot Goby, G. thompsoni, that is indistinguishable from G. scapulostigma in the Indian Ocean (Randall & Greenfield 2001). Hence comparative morphology indicated a recent colonization event. Rocha et al. (2005b) determined that this Atlantic species was indeed closely related to G. scapulostigma (d =0.0054 with mtDNA cytochrome b), indicating a colonization into the Atlantic approximately 150,000 years ago (Fig. 17.7). 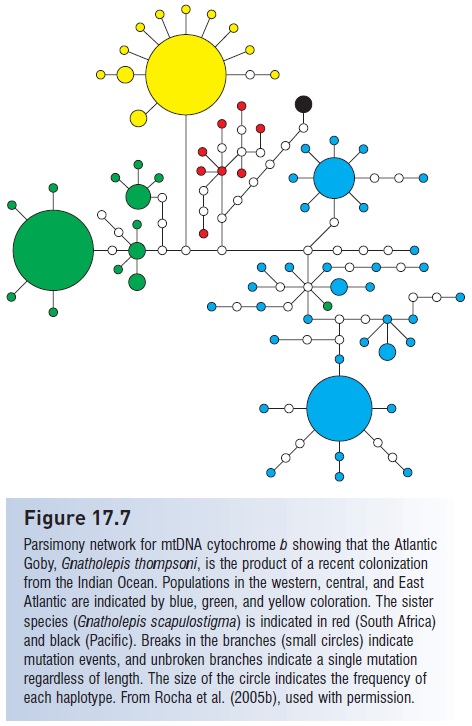 Like the transarctic exchange described above, the route around southern Africa is an important biogeographic pathway for marine fishes, enhancing biodiversity in the Atlantic Ocean. Studies of the Indian–Atlantic barrier have focused on colonization into the Atlantic, consistent with prevailing currents. However, colonization in the other direction is possible for species that can overcome the water flow, as indicated by two recent examples from sharks. In the Scalloped Hammerhead Shark (Sphyrna lewini) and Blacktip Shark (Carcharhinus limbatus), haplotypes in the Indian Ocean are recently derived from the Atlantic populations (Duncan et al. 2006; Keeney & Heist 2006). Unlike most marine fishes, wherein dispersal is accomplished primarily by larvae, most sharks are active swimmers from birth. Swimming is the only form of dispersal available, and may eventually prove to be a fundamental difference between the phylogeography of bony fishes and elasmobranchs.

Phylogeographic studies continue to unravel the evolutionary history of fishes. They are most powerful when evidence from multiple species is assembled to resolve general trends (Lessios & Robertson 2006), and when the evidence from DNA is combined with biogeographic information, morphology, earth history, and ecology.