The history of ray-finned fishes

The most successful modern fishes are the teleosts. However, ray-finned fishes include four additional lineages, known as the ancient actinopterygians.

The history of ray-finned fishes

The most successful modern fishes are the teleosts. However, ray-finned fishes include four additional lineages, known as the ancient actinopterygians. These include polypteriforms (bichirs and reedfish), acipenseriforms (sturgeons and paddlefish), lepisosteids (gars), and Amia calva (Bowfin). How they relate to teleosts, and each other, has been a matter of considerable debate, with systematists proposing almost every possible arrangement of relationships. However, most authorities have identified the polypteriforms as the oldest extant group of ray-finned fishes. 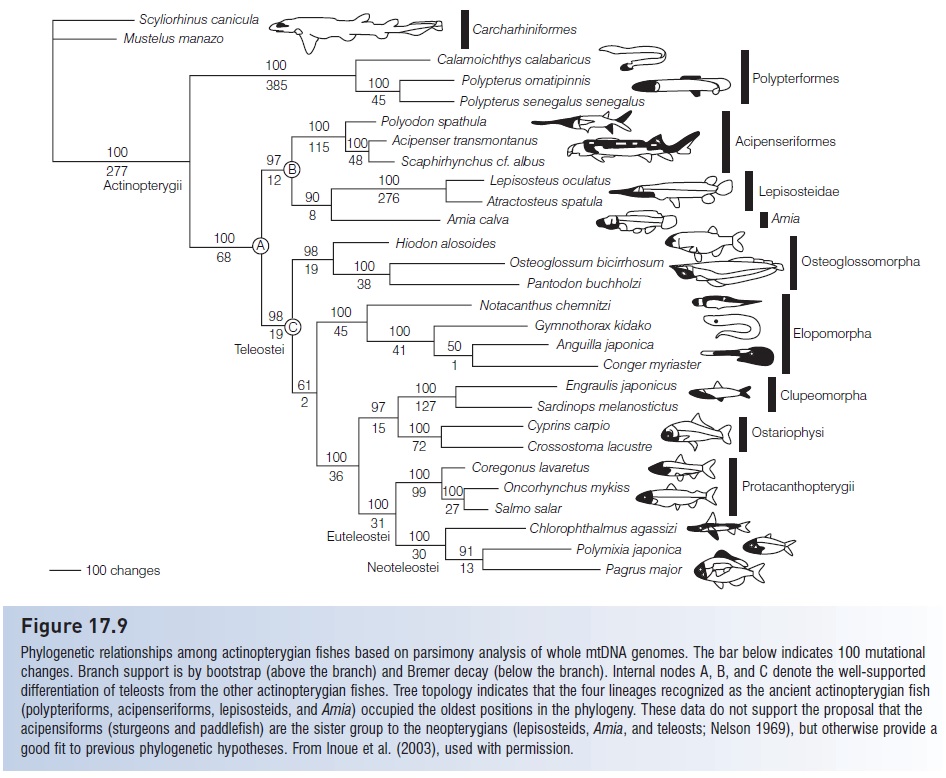 Phylogenetic relationships among actinopterygian fishes based on parsimony analysis of whole mtDNA genomes. The bar below indicates 100 mutational changes. Branch support is by bootstrap (above the branch) and Bremer decay (below the branch). Internal nodes A, B, and C denote the well-supported differentiation of teleosts from the other actinopterygian fishes. Tree topology indicates that the four lineages recognized as the ancient actinopterygian fish (polypteriforms, acipenseriforms, lepisosteids, and Amia) occupied the oldest positions in the phylogeny. These data do not support the proposal that the acipensiforms (sturgeons and paddlefish) are the sister group to the neopterygians (lepisosteids, Amia, and teleosts; Nelson 1969), but otherwise provide a good fit to previous phylogenetic hypotheses. From Inoue et al. (2003), used with permission.

In keeping with earlier hypotheses, the polypteriforms appear to be the most ancient of the living ray-finned fishes.

No doubt their persistence into the modern era is aided by unusual adaptations to arid conditions; for example, the bichir live in semipermanent freshwater habitats in Africa and their gas bladder functions as a primitive lung. They can obtain oxygen from air during periods of stagnation and drought, and can move over land to another body of water if their lake or swamp dries up. Based on the mtDNA data, the sturgeons, paddlefish, gars, and Bowfin are a sister lineage to the teleosts.

The phylogeny of higher teleosts (Percomorpha) has been investigated with 100 complete mtDNA sequences, and these data indicate many unexpected relationships, including a phylogenetic affinity between Lophiiformes (goosefish, long assumed to be a primitive teleost) and Tetradontiformes (pufferfishes, long assumed to be among the most advanced teleosts) (Miya et al. 2003). Clearly these findings indicate a rich field for further investigation.