The deepest vertebrate radiations: are you a fish?

The deepest vertebrate radiations: are you a fish?

Takezaki et al. (2003) used over 27 kb of DNA sequence data from 35 nuclear genes to resolve the deepest lineages in the fish tree (Fig. 17.8). Despite fundamental morphological differences, the two jawless fishes (hagfishes and lampreys) appear to be each other’s closest relatives. These data indicate that the cartilaginous fishes diverged next, followed by a bony fishes/tetrapod radiation. Based on molecular studies, the coelacanths appear to diverge near the base of the bony fish/tetrapod bifurcation (Zardoya & Meyer 1996). 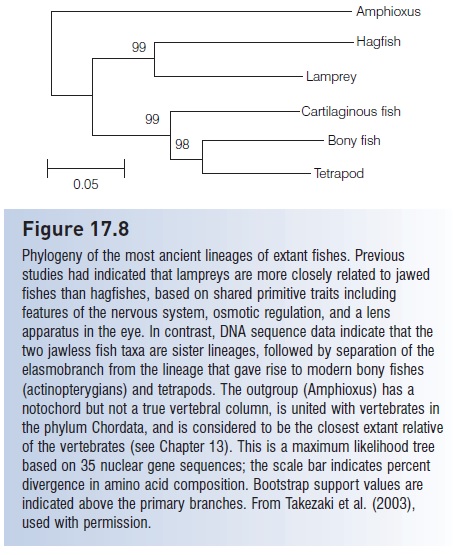 Phylogeny of the most ancient lineages of extant fishes. Previous studies had indicated that lampreys are more closely related to jawed fishes than hagfishes, based on shared primitive traits including features of the nervous system, osmotic regulation, and a lens apparatus in the eye. In contrast, DNA sequence data indicate that the two jawless fish taxa are sister lineages, followed by separation of the elasmobranch from the lineage that gave rise to modern bony fishes (actinopterygians) and tetrapods. The outgroup (Amphioxus) has a notochord but not a true vertebral column, is united with vertebrates in the phylum Chordata, and is considered to be the closest extant relative of the vertebrates. This is a maximum likelihood tree based on 35 nuclear gene sequences; the scale bar indicates percent divergence in amino acid composition. Bootstrap support values are indicated above the primary branches. From Takezaki et al. (2003), used with permission.

These studies illustrate two points: First, molecular systematics is especially valuable in cases where the morphology is too divergent (or too similar) to make robust phylogenetic conclusions. Second, the lineage that gave rise to terrestrial vertebrates was the most recent of the major branches in fish history, demonstrating that you, the reader, are really an odd fish.