General anesthesia is an altered physiological state characterized by reversible loss of consciousness, analgesia, amnesia, and some degree of muscle relaxation.

Th ere does not seem to be a single macroscopic site of action that is shared by all inhalation agents. Specific brain areas affected by various anesthetics include the reticular activating system, the cerebral cortex, the cuneate nucleus, the olfactory cortex, and the hippocampus; however, to be clear, general anes-thetics bind throughout the CNS. Anesthetics have also been shown to depress excitatory transmission in the spinal cord, particularly at the level of the dor-sal horn interneurons that are involved in pain trans-mission. Differing aspects of anesthesia may be related to different sites of anesthetic action. For example, unconsciousness and amnesia are probably mediated by cortical anesthetic action, whereas the suppression of purposeful withdrawal from pain may be related to subcortical structures, such as the spinal cord or brain stem. One study in rats revealed that removal of the cerebral cortex did not alter the potency of the anesthetic! Indeed, measures of mini-mal alveolar concentration (MAC), the anesthetic concentration that prevents movement in 50% of subjects or animals, are dependent upon anesthetic effects at the spinal cord and not at the cortex.

Past understanding of anesthetic action attempted to identify a unitary hypothesis ofanesthetic effects. This hypothesis proposes that all inhalation agents share a common mechanism of action at the molecular level. This was previously supported by the observation that the anesthetic potency of inhalation agents correlates directly with their lipid solubility (Meyer–Overton rule). The implication is that anesthesia results from molecules dissolving at specific lipophilic sites. Of course, not all lipid-soluble molecules are anesthetics (some are actually convulsants), and the correlation between anesthetic potency and lipid solubility is only approximate (Figure 8–4). 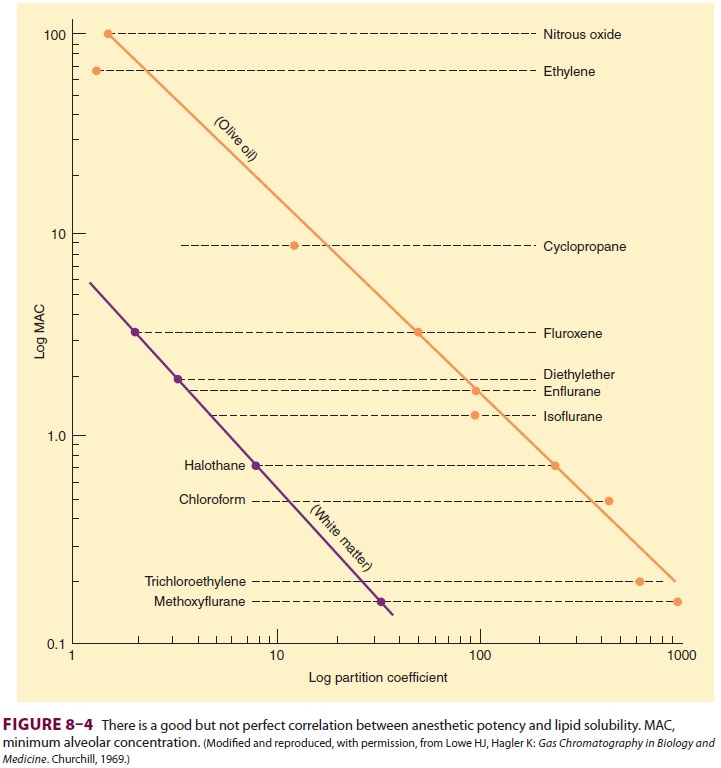 Neuronal membranes contain a multitude of hydrophobic sites in their phospholipid bilayer. Anesthetic binding to these sites could expand the bilayer beyond a critical amount, altering membrane function (critical volume hypothesis). Although this theory is almost certainly an oversimplification, it explains an interesting phenomenon: the reversal of anesthesia by increased pressure. Laboratory animals exposed to elevated hydrostatic pressure develop a resistance to anesthetic effects. Perhaps the pres-sure is displacing a number of molecules from the membrane or distorting the anesthetic binding sites in the membrane, increasing anesthetic require-ments. However, studies in the 1980s demonstrated the ability of anesthetics to inhibit protein actions, shifting attention to the numerous ion channels that might affect neuronal transmission and away from the critical volume hypothesis.

General anesthetic action could be due to alter-ations in any one (or a combination) of several cel-lular systems, including voltage-gated ion channels, ligand-gated ion channels, second messenger func-tions, or neurotransmitter receptors. For example, many anesthetics enhance GABA inhibition of the CNS. Furthermore, GABA receptor agonists seem to enhance anesthesia, whereas GABA antagonists reverse some anesthetic effects. There seems to be a strong correlation between anesthetic potency and potentiation of GABA receptor activity. Thus, anesthetic action may relate to binding in relatively hydrophobic domains in channel proteins (GABA receptors). Modulation of GABA function may prove to be a principal mechanism of action for many anesthetic drugs.

The glycine receptor α1-subunit, whose func-tion is enhanced by inhalation anesthetics, is another potential anesthetic site of action.

The tertiary and quaternary structure of amino acids within an anesthetic-binding pocket could be modified by inhalation agents, perturbing the receptor itself, or indirectly producing an effect at a distant site.

Other ligand-gated ion channels whose modula-tion may play a role in anesthetic action include nico-tinic acetylcholine receptors and NMDA receptors.

Investigations into mechanisms of anesthetic action are likely to remain ongoing for many years, as many protein channels may be affected by indi-vidual anesthetic agents, and no obligatory site has yet been identified. Selecting among so many molecular targets for the one(s) that provide opti-mum effects with minimal adverse actions will be the challenge in designing better inhalational agents.