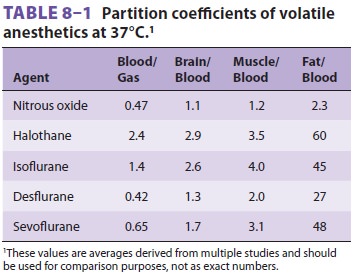 Relatively soluble agents, such as nitrous oxide, are taken up by the blood less avidly than more solu-ble agents, such as halothane. As a consequence, the alveolar concentration of nitrous oxide rises faster than that of halothane, and induction is faster. The relative solubilities of an anesthetic in air, blood, and tissues are expressed as partition coefficients (Table 8–1). Each coefficient is the ratio of the concentrations of the anesthetic gas in each of two phases at steady state. Steady state is defined as equal partial pressures in the two phases. For instance, the blood/gas partition coefficient (λb/g) of nitrous oxide at 37°C is 0.47. In other words, at steady state, 1 mL of blood contains 0.47 as much nitrous oxide as does 1 mL of alveolar gas, even though the partial pressures are the same. Stated another way, blood has 47% of the capacity for nitrous oxide as alveolar gas. Nitrous oxide is much less soluble in blood than is halothane, which has a blood/gas partition coef-ficient at 37°C of 2.4. Thus, almost five times more halothane than nitrous oxide must be dissolved to raise the partial pressure of blood. The higher the blood/gas coefficient, the greater the anesthetic’s sol-ubility and the greater its uptake by the pulmonary circulation. As a consequence of this increased solu-bility, alveolar partial pressure rises more slowly, and induction is prolonged. Because fat/blood partition coefficients are greater than 1, blood/gas solubility is increased by postprandial lipidemia and is decreased by anemia.

The final factor affecting uptake of anesthetic by the pulmonary circulation is the partial pressure dif-ference between alveolar gas and venous blood. This gradient depends on tissue uptake. If anesthetics did not pass into organs such as the brain, venous and alveolar partial pressures would become identical, and there would be no pulmonary uptake. The trans-fer of anesthetic from blood to tissues is determined by three factors analogous to systemic uptake: tissue solubility of the agent (tissue/blood partition coeffi-cient), tissue blood flow, and the difference in partial pressure between arterial blood and the tissue.

To better understand inhaled anesthetic uptake and distribution, tissues have been classified into four groups based on their solubility and blood flow (Table 8–2). The highly perfused vessel-rich group (brain, heart, liver, kidney, and endocrine organs) is 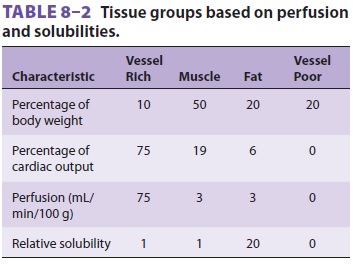 the first to encounter appreciable amounts of anes-thetic. Moderate solubility and small volume limit the capacity of this group, so it is also the fi rst to reach steady state (ie, arterial and tissue partial pressures are equal). The muscle group (skin and muscle) is not as well perfused, so uptake is slower. In addition, it has a greater capacity due to a larger volume, and uptake will be sustained for hours. Perfusion of the fat group nearly equals that of the muscle group, but the tremendous solubility of anesthetic in fat leads to a total capacity (tissue/blood solubility × tissue vol-ume) that would take days to approach steady state. The minimal perfusion of the vessel-poor group (bones, ligaments, teeth, hair, and cartilage) results in insignificant uptake.

Anesthetic uptake produces a characteristic curve that relates the rise in alveolar concentra-tion to time (Figure 8–2). The shape of this graph is determined by the uptakes of individual tissue groups (Figure 8–3). The initial steep rate of uptake is due to unopposed filling of the alveoli by ventila-tion. The rate of rise slows as the vessel-rich group— and eventually the muscle group—approach steady state levels of saturation. 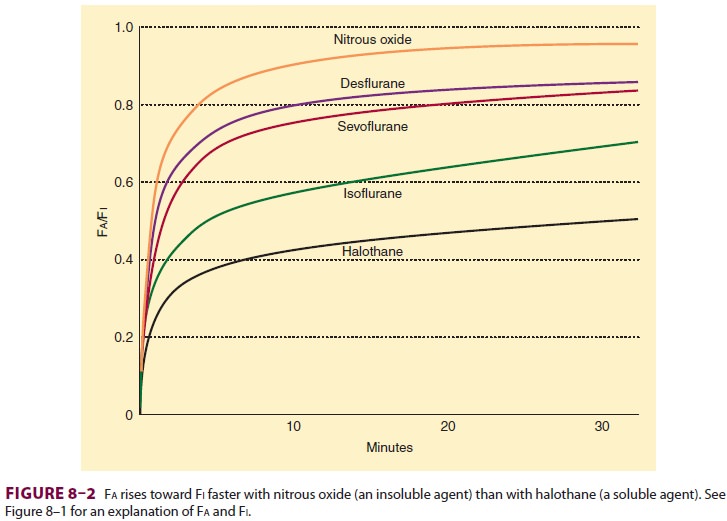 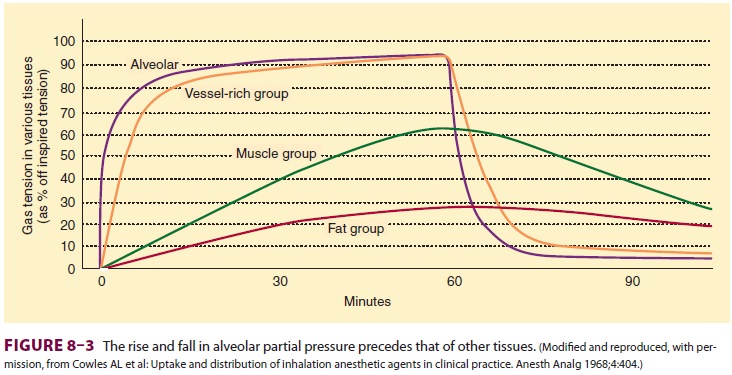 The lowering of alveolar partial pressure by uptake can be countered by increasing alveolar ventila-tion. In other words, constantly replacing anesthetic taken up by the pulmonary bloodstream results in better maintenance of alveolar concentration. The effect of increasing ventilation will be most obvious in raising the Fa/Fi for soluble anesthetics, as they are more subject to uptake. Because the Fa/Fi very rapidly approaches 1.0 for insoluble agents, increas-ing ventilation has minimal effect. In contrast to the effect of anesthetics on cardiac output, anesthetics that depress spontaneous ventilation (eg, ether or halothane) will decrease the rate of rise in alveolar concentration and create a negative feedback loop.