The carbon–fluoride bonds are responsible for its nonflammable and nonexplosive nature.

Halothane is a halogenated alkane (see Table 8–3). The carbon–fluoride bonds are responsible for its nonflammable and nonexplosive nature. Thymol preservative and amber-colored bottles retard spon-taneous oxidative decomposition. It is rarely used in the United States. 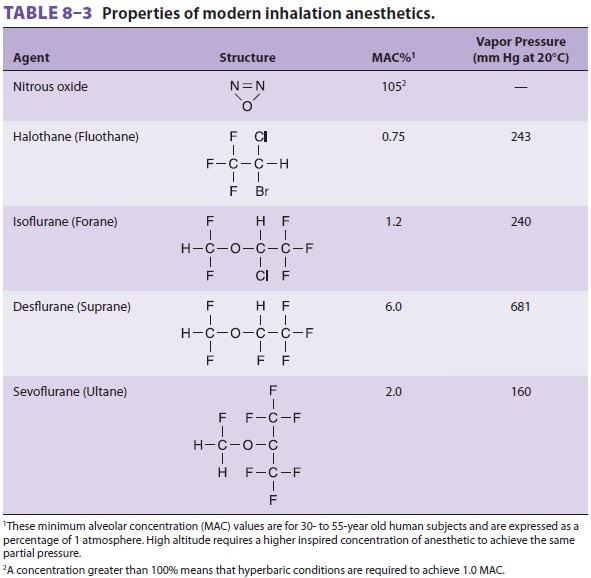 A dose-dependent reduction of arterial blood pressure is due to direct myocardial depression; 2.0 MAC of halothane in patients not undergoing surgery results in a 50% decrease in blood pres-sure and cardiac output. Cardiac depression— from interference with sodium–calcium exchange and intracellular calcium utilization—causes an increase in right atrial pressure. Although halothane is a coronary artery vasodilator, coronary blood flow decreases, due to the drop in systemic arterial pressure. Adequate myocardial perfusion is usually maintained, as oxygen demand also drops. Normally, hypotension inhibits baroreceptors in the aortic arch and carotid bifurcation, causing a decrease in vagal stimulation and a compensatory rise in heart rate. Halothane blunts this reflex. Slowing of sinoatrial node conduction may result in a junctional rhythm or bradycardia. In infants, halothane decreases car-diac output by a combination of decreased heart rate and depressed myocardial contractility. Halothane sensitizes the heart to the arrhythmogenic effects of epinephrine, so that doses of epinephrine above 1.5 mcg/kg should be avoided. Although organ blood flow is redistributed, systemic vascular resistance is unchanged.

Halothane typically causes rapid, shallow breath-ing. The increased respiratory rate is not enough to counter the decreased tidal volume, so alveolar ventilation drops, and resting Paco 2 is elevated. Apneic threshold, the highest Paco2at which apatient remains apneic, also rises because the dif-ference between it and resting Paco2 is not altered by general anesthesia. Similarly, halothane limits the increase in minute ventilation that normally accom-panies a rise in Paco2. Halothane’s ventilatory effects are probably due to central (medullary depression) and peripheral (intercostal muscle dysfunction) mechanisms. These changes are exaggerated by preexisting lung disease and attenuated by surgical stimulation. The increase in Paco2 and the decrease in intrathoracic pressure that accompany spontane-ous ventilation with halothane partially reverse the depression in cardiac output, arterial blood pres-sure, and heart rate described above. Hypoxic drive is severely depressed by even low concentrations of halothane (0.1 MAC).

Halothane relaxes skeletal muscle and potentiates nondepolarizing neuromuscular-blocking agents (NMBA). Like the other potent volatile anesthetics, it is a triggering agent of malignant hyperthermia.

Halothane causes hepatic blood flow to decrease in proportion to the depression of cardiac output. Hepatic artery vasospasm has been reported during halothane anesthesia. The metabolism and clearance of some drugs (eg, fentanyl, phenytoin, verapamil) seem to be impaired by halothane. Other evidence of hepatic cellular dysfunction includes sulfobro-mophthalein (BSP) dye retention and minor liver transaminase elevations.

Halothane is oxidized in the liver by a particular iso-zyme of CYP (2EI) to its principal metabolite, tri-fluoroacetic acid. This metabolism can be inhibited by pretreatment with disulfiram. Bromide, another oxidative metabolite, has been incriminated in (but is an improbable cause of) postanesthetic changes in mental status. In the absence of oxygen, reductive metabolism may result in a small amount of hepa-totoxic end products that covalently bind to tissue macromolecules. This is more apt to occur following enzyme induction by phenobarbital. Elevated fluo-ride levels signal significant anaerobic metabolism.

Patients exposed to multiple halothane anesthetics at short intervals, middle-aged obese women, and persons with a familial predisposition to halothane toxicity or a personal history of toxicity are considered to be at increased risk. Signs are mostly related to hepatic injury, such as increased serum alanine and aspartate transferase, elevated bilirubin (leading to jaundice), and encephalopathy.

More likely evidence points to an immune mechanism. For instance, some signs of the dis-ease indicate an allergic reaction (eg, eosinophilia, rash, fever) and do not appear until a few days after exposure. Furthermore, an antibody that binds to hepatocytes previously exposed to halothane has been isolated from patients with halothane-induced hepatic dysfunction. This antibody response may involve liver microsomal proteins that have been modified by trifluoroacetic acid as the triggering antigens (trifluoroacetylated liver proteins such as microsomal carboxylesterase). As with halothane, other inhalational agents that undergo oxidative metabolism can likewise lead to hepatitis. However, newer agents undergo little to no metabolism, and therefore do not form trifluroacetic acid protein adducts or produce the immune response leading to hepatitis.

It is prudent to withhold halothane from patients with unexplained liver dysfunction following previ-ous anesthetic exposure. Halothane, like all inhalational anesthetics, should be used with care in patients with intracranial mass lesions because of the possibility of intracranial hypertension secondary to increased cerebral blood volume and blood flow.Hypovolemic patients and some patients with severe reductions in left ventricular function may not tolerate halothane’s negative inotropic effects. Sensitization of the heart to catecholamines lim-its the usefulness of halothane when exogenous epinephrine is administered or in patients with pheochromocytoma.

The myocardial depression seen with halothane is exacerbated by β-adrenergic-blocking agents and calcium channel-blocking agents. Tricyclic antide-pressants and monoamine oxidase inhibitors have been associated with f uctuationsl in blood pres-sure and arrhythmias, although neither represents an absolute contraindication. The combination of halothane and aminophylline has resulted in serious ventricular arrhythmias.