Nitrous oxide has a tendency to stimulate the sym-pathetic nervous system.

Nitrous oxide (N2O; laughing gas) is colorless and essentially odorless. Although nonexplosive and nonflammable, nitrous oxide is as capable as oxygen of supporting combustion. Unlike the potent volatile 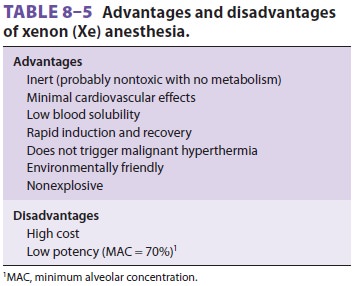 Nitrous oxide has a tendency to stimulate the sym-pathetic nervous system. Thus, even though nitrous oxide directly depresses myocardial contractility in 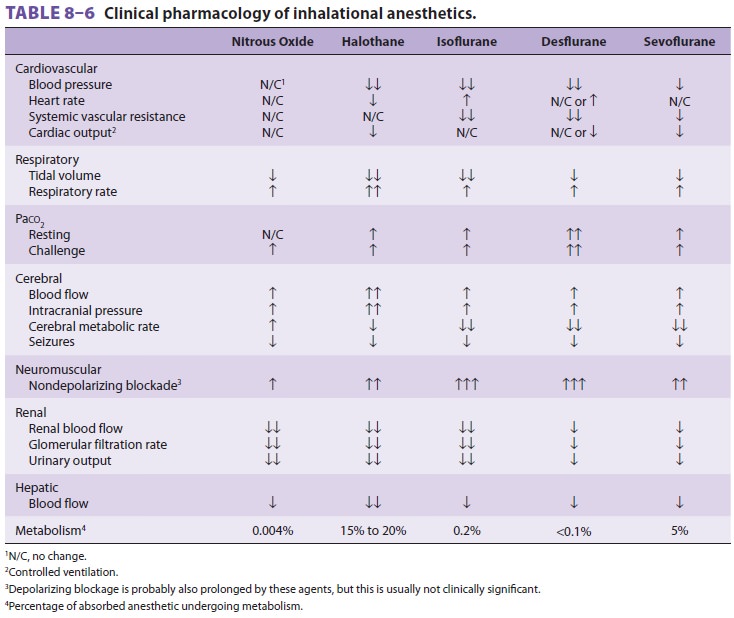 vitro, arterial blood pressure, cardiac output, and heart rate are essentially unchanged or slightly ele-vated in vivo because of its stimulation of catechol-amines (Table 8–6). Myocardial depression may be unmasked in patients with coronary artery disease or severe hypovolemia. Constriction of pulmonary vascular smooth muscle increases pulmonary vas-cular resistance, which results in a generally modest elevation of right ventricular end-diastolic pressure. Despite vasoconstriction of cutaneous vessels, periph-eral vascular resistance is not significantly altered.

Nitrous oxide increases respiratory rate (tachy-pnea) and decreases tidal volume as a result of CNS stimulation and, perhaps, activation of pulmonary stretch receptors. The net effect is a minimal change in minute ventilation and resting arterial CO 2 levels. Hypoxic drive, the ventilatory response to arterial hypoxia that is mediated by peripheral chemorecep-tors in the carotid bodies, is markedly depressed by even small amounts of nitrous oxide. This is a con-cern in the recovery room.

In contrast to other inhalation agents, nitrous oxide does not provide significant muscle relaxation. In fact, at high concentrations in hyperbaric cham-bers, nitrous oxide causes skeletal muscle rigidity. Nitrous oxide is not a triggering agent of malignant hyperthermia.

Hepatic blood flow probably falls during nitrous oxide anesthesia, but to a lesser extent than with the volatile agents.

Use of nitrous oxide in adults increases the risk of postoperative nausea and vomiting, presumably as a result of activation of the chemoreceptor trigger zone and the vomiting center in the medulla.

During emergence, almost all nitrous oxide is eliminated by exhalation. A small amount diffuses out through the skin. Biotransformation is limited to the less than 0.01% that undergoes reductive metabolism in the gastrointestinal tract by anaero-bic bacteria.

By irreversibly oxidizing the cobalt atom in vitamin B12, nitrous oxide inhibits enzymes that are vitamin B12 dependent. These enzymes include methionine synthetase, which is necessary for myelin formation, and thymidylate synthetase, which is necessary for DNA synthesis. Prolonged expo-sure to anesthetic concentrations of nitrousoxide can result in bone marrow depression (mega-loblastic anemia) and even neurological deficiencies (peripheral neuropathies). However, administration of nitrous oxide for bone marrow harvest does not seem to affect the viability of bone marrow mono-nuclear cells. Because of possible teratogenic effects, nitrous oxide is often avoided in pregnant patients who are not yet in the third trimester. Nitrous oxide may also alter the immunological response to infec-tion by affecting chemotaxis and motility of poly-morphonuclear leukocytes.

Although nitrous oxide is insoluble in comparison with other inhalation agents, it is 35 times more soluble than nitrogen in blood. Thus, it tends to diffuse into air-containing cavities more rapidly than nitrogen is absorbed by the bloodstream. For instance, if a patient with a 100-mL pneumothorax inhales 50% nitrous oxide, the gas content of the pneumothorax will tend to approach that of the bloodstream. Because nitrous oxide will diffuse into the cavity more rapidly than the air (princi-pally nitrogen) diffuses out, the pneumothorax expands until it contains 100 mL of air and 100 mL of nitrous oxide. If the walls surrounding the cavity are rigid, pressure rises instead of volume.