Once absorbed, a drug is distributed by the blood-stream throughout the body. Highly perfused organs (the so-called vessel-rich group) receive a dispro-portionate fraction of the cardiac output.

Once absorbed, a drug is distributed by the blood-stream throughout the body. Highly perfused organs (the so-called vessel-rich group) receive a dispro-portionate fraction of the cardiac output ( Table 7–1). Therefore, these tissues receive a disproportionate amount of drug in the first minutes following drug administration. These tissues approach equilibration with the plasma concentration more quickly than less well perfused tissues due to the differences in 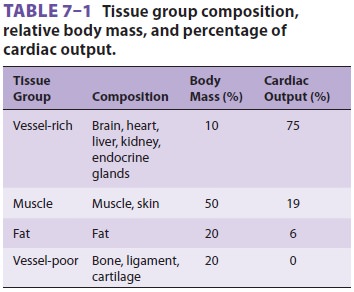 blood flow. However, less well perfused tissues such as fat and skin may have enormous capacity to absorb lipophilic drugs, resulting in a large reservoir of drug following long infusions.

Molecules in blood are either free or bound to plasma proteins and lipids. The free concentration equilibrates between organs and tissues. However, the equilibration between bound and unbound mol-ecules is instantaneous. As unbound molecules of drug diffuse into tissue, they are instantly replaced by previously bound molecules. Plasma protein bind-ing does not affect the rate of transfer directly, but it does affect relative solubility of the drug in blood and tissue. If the drug is highly bound in tissues, and unbound in plasma, then the relative solubility favors drug transfer into tissue. Put another way, a drug that is highly bound in tissue, but not in blood, will have a very large free drug concentration gradi-ent driving drug into the tissue. Conversely, if the drug is highly bound in plasma and has few binding sites in the tissue, then transfer of a small amount of drug may be enough to bring the free drug concen-tration into equilibrium between blood and tissue. Thus, high levels of binding in blood relative to tis-sues increase the rate of onset of drug effect, because fewer molecules need to transfer into the tissue to produce an effective free drug concentration.

Albumin binds many acidic drugs (eg, barbi-turates), whereas α1-acid glycoprotein (AAG) binds basic drugs (local anesthetics). If the concentrations of these proteins are diminished or (typically less important) if the protein-binding sites are occupied by other drugs, then the relative solubility of the drugs in blood is decreased, increasing tissue uptake. Kidney disease, liver disease, chronic congestive heart failure, and malignancies decrease albumin produc-tion. Trauma (including surgery), infection, myocar-dial infarction, and chronic pain increase AAG levels. Pregnancy is associated with reduced AAG concen-trations. Note that these changes will have very little effect on propofol, which is administered with its own binding molecules (the lipid in the emulsion).

Lipophilic molecules can readily transfer between the blood and organs. Charged molecules are able to pass in small quantities into most organs. However, the blood–brain barrier is a special case. Permeation of the central nervous system by ionized drugs is limited by pericapillary glial cells and endothelial cell tight junctions. Most drugs that readily cross the blood–brain barrier (eg, lipophilic drugs like hypnotics and opioids) are avidly taken up in body fat.

The complex process of drug distribution into and out of tissues is one reason that half-lives are clinically useless. The offset of a drug’s clinical actions are best predicted by computer models using the context-sensitive half-time or decrement times. The context-sensitive half-time is the time required for a 50% decrease in plasma drug concentration to occur following a pseudo steady-state infusion (in other words, an infusion that has continued long enough to yield nearly steady-state concentrations). Here the “context” is the duration of the infusion. The context-sensitive decrement time is a more gen-eralized concept referring to any clinically relevant decreased concentration in any tissue, particularly the brain or effect site.

The volume of distribution, Vd, is the appar-ent volume into which a drug has “distributed” (ie,mixed). This volume is calculated by dividing a bolus dose of drug by the plasma concentration at time 0. In practice, the concentration used to define the Vd is often obtained by extrapolating subsequent concentrations back to “0 time” when the drug was injected, as follows:

A small Vdss implies that the drug has high aqueous solubility and will remain largely within the intravascular space. For example, the Vdss of pancuronium is about 15 L in a 70-kg person, indi-cating that pancuronium is mostly present in body water, with little distribution into fat. However, the typical anesthetic drug is lipophilic, resulting in a Vdssthat exceeds total body water (approximately 40 L). For example, the Vdss for fentanyl is about 350 L in adults, and the Vdss for propofol may exceed 5000 L. Vdss does not represent a real volume but rather reflects the volume into which the drug would need to distribute to account for the observed plasma concentration given the dose that was administered.