The hard keratin of the nail plate is formed in the nail matrix, which lies in an invagination of the epidermis (the nail fold) on the back of the terminal phalanx of each digit.

The structure of the nail and nail bed is shown in Fig. 13.19. The hard keratin of the nail plate is formed in the nail matrix, which lies in an invagination of the epidermis (the nail fold) on the back of the terminal phalanx of each digit. The matrix runs from the prox-imal end of the floor of the nail fold to the distal margin of the lunule. From this area the nail plate grows forward over the nail bed, ending in a free margin at the tip of the digit. Longitudinal ridges and grooves on the under surface of the nail plate dovetail with similar ones on the upper surface of the nail bed. The nail bed is capable of producing small amounts of keratin which contribute to the nail and which are responsible for the ‘false nail’ formed when the nail matrix is obliterated by surgery or injury. The cuticle acts as a seal to protect the potential space of the nail fold from chemicals and from infection. The nails provide strength and protection for the terminal phalanx. Their presence helps with fine touch and with the handling of small objects. 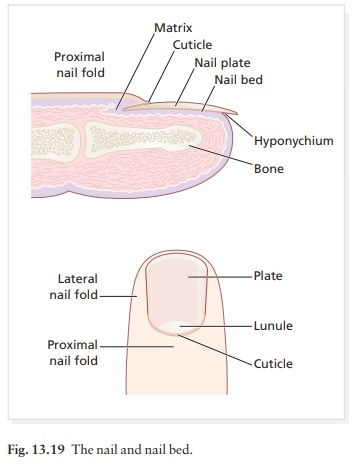 The rate at which nails grow varies from person to person: fingernails average between 0.5 and 1.2 mm per week, while toenails grow more slowly. Nails grow faster in the summer, if they are bitten, and in youth. They change with ageing from the thin, occasionally spooned nails of early childhood to the duller, paler and more opaque nails of the very old. Longitudinal ridging and beading are particularly common in the elderly.

Patchy hair loss caused by skin disease
Diffuse hair loss
Rare genetic causes of hypotrichosis
Hirsutism and hypertrichosis
Hypertrichosis
The nails
The nails: Effects of trauma
The nail in systemic disease
Nail changes in the common dermatoses
The nails Infections
Some other nail abnormalities
The mouth and genitals
Lichen planus