The nail in systemic disease

The nails can provide useful clues for general physicians.

The nail in systemic disease

The nails can provide useful clues for general physicians.

Clubbing (Fig. 13.24) is a bulbous enlargementof the terminal phalanx with an increase in the angle between the nail plate and the proximal fold to over 180° (Fig. 13.25). Its association with chronic lung disease and with cyanotic heart disease is well known. Rarely clubbing may be familial with no underlying cause. The mechanisms involved in its formation are still not known. 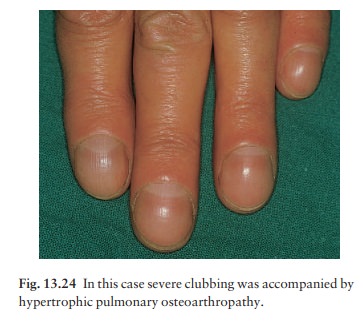 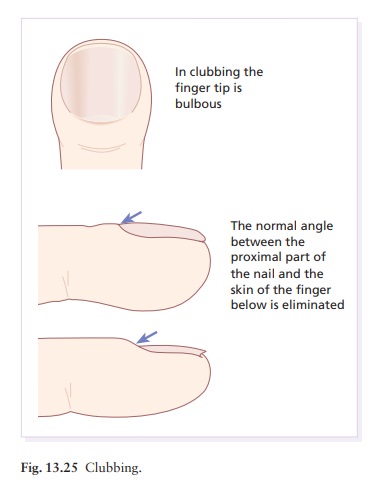 Koilonychia, a spooning and thinning of the nailplate, indicates iron deficiency (Fig. 13.26). 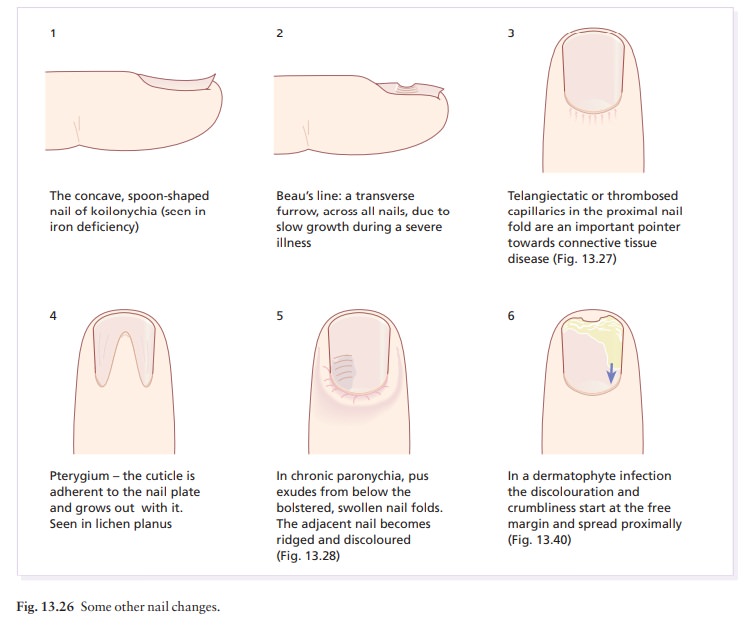 Colour changes: the ‘half-and-half’ nail, with awhite proximal and red or brown distal half, is seen in a minority of patients with chronic renal failure. Whitening of the nail plates may be related to hypo-albuminaemia, as in cirrhosis of the liver. Some drugs, notably antimalarials, antibiotics and phenothiazines, can discolour the nails.

Beau’s lines are transverse grooves which appearsynchronously on all nails a few weeks after an acute illness, and which grow steadily out to the free margin (Fig. 13.26).

Connective tissue disorders: nail fold telangiectasia orerythema is a useful physical sign in dermatomyositis, systemic sclerosis and systemic lupus erythematosus (Fig. 13.27). In dermatomyositis the cuticles become shaggy, and in systemic sclerosis loss of finger pulp leads to overcurvature of the nail plates. Thin nails, with longitudinal ridging and sometimes partial onycholysis, are seen when the peripheral circulation is impaired, as in Raynaud’s phenomenon. 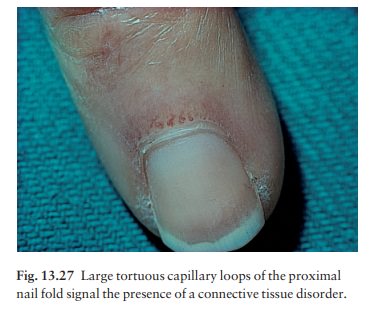