Hirsutism is the growth of terminal hair in a female (Fig. 13.15), which is distributed in the pattern norm-ally seen in a male. 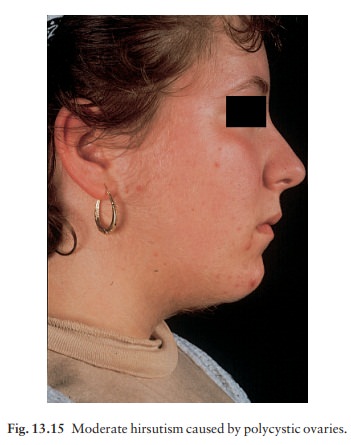 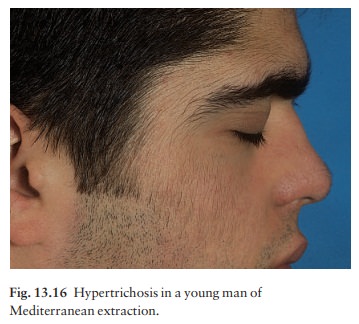 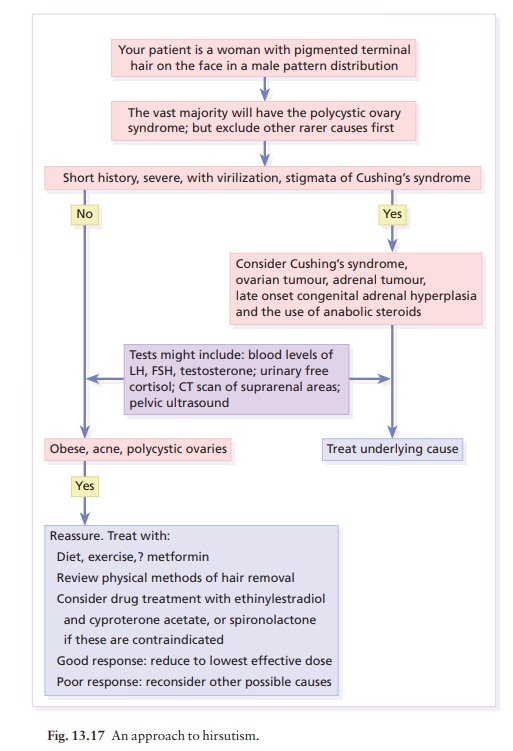 An excessive growth of hair appears in the beard area, on the chest and shoulder-tips, around the nipples and in the male pattern of pubic hair. Androgenetic alopecia may complete the picture.

Familial, racial or idiopathic hirsutism tends to start at puberty and to worsen with age.

Significant hormonal abnormalities are not usually found in patients with a normal menstrual cycle.

•   if hirsutism occurs in childhood;

•   if there are other features of virilization, such as clitoromegaly;

•   if the hirsutism is of sudden or recent onset; or

•   if there is menstrual irregularity or cessation.

The tests used will include measurement of the serum testosterone, sex-hormone-binding globulin, dehy-droepiandrosterone sulphate, androstenedione and prolactin. Ovarian ultrasound is useful if polycystic ovaries are suspected.

Any underlying disorder must be treated on its merits. Home remedies for minor hirsutism include commercial depilatory creams (often containing a thioglycollate), waxing or shaving, or making the appearance less obvious by bleaching; none remove the hair per-mamently. Plucking should probably be avoided as it can stimulate hair roots into anagen. The abnormally active follicles, if relatively few, can be destroyed by electrolysis. If the hairs are too numerous for this, the excess can be removed by laser. Topical therapy with eflornithine, an inhibitor of ornithine decarboxylase, can slow regrowth. Oral antiandrogens (e.g. cyproterone acetate; Dianette) may sometimes be helpful, but will be needed long-term. Pregnancy must be avoided during such

treatment as it carries the risk of feminizing a male fetus. Spironolactone is used less often now.