The nails: Effects of trauma 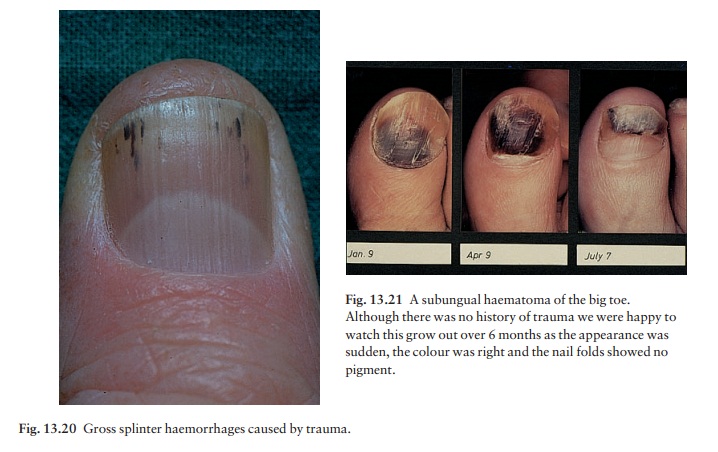 Permanent ridges or splits in the nail plate can follow damage to the nail matrix..

Permanent ridges or splits in the nail plate can follow damage to the nail matrix. Splinter haemorrhages (Fig. 13.20), the linear nature of which is determined by longitudinal ridges and grooves in the nail bed, are most commonly seen under the nails of manual workers and are caused by minor trauma. They may also be a feature of psoriasis of the nail and of subacute bacterial endocarditis. Larger subungual haematomas (Fig. 13.21) are usually easy to identify but the trauma that caused them may have escaped notice and dark areas of altered blood can raise worries about the presence of a subungual melanoma. 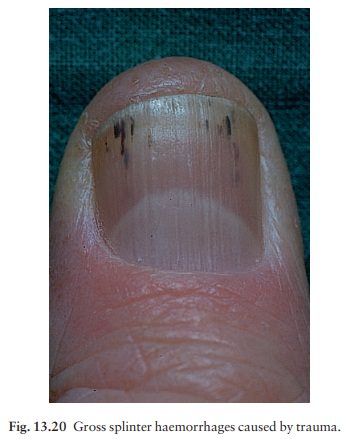 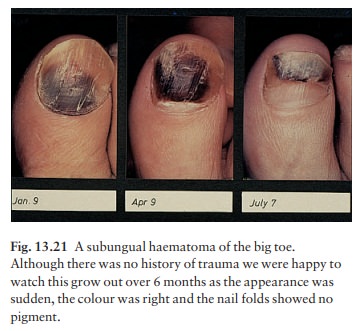 Chronic trauma from sport and from ill-fitting shoes contributes to haemorrhage under the nails of the big toes, to the gross thickening of toenails known as onychogryphosis (Fig. 13.22), and to ingrowing nails. Onycholysis, a separation of the nail plate from thenail bed (Fig. 13.23), may be a result of minor trauma although it is also seen in nail psoriasis (Fig. 5.8), and possibly in thyroid disease. Usually no cause for it is found. 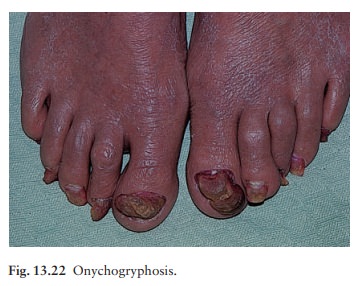 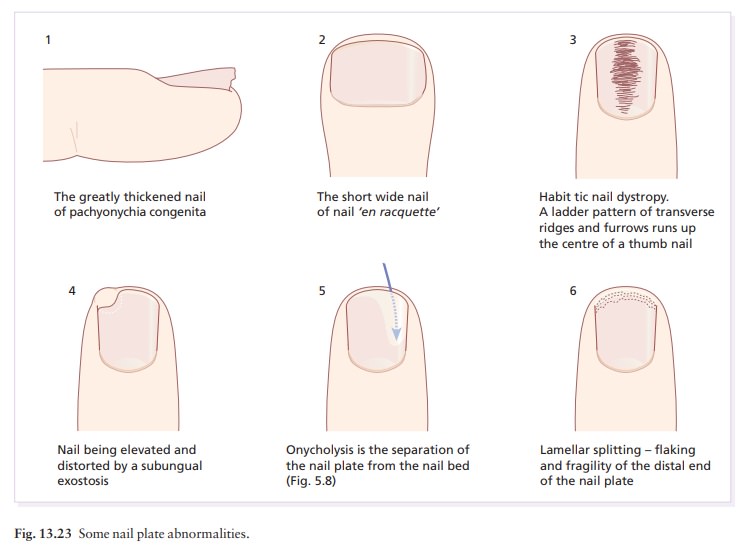 The space created may be colonized by yeasts, or by bacteria such as Pseudomonas aeruginosa, which turns it an ugly green colour.

Some nervous habits damage the nails. Bitten nails are short and irregular; some people also bite their cuticles and the skin around the nails.

Viral warts can be seeded rapidly in this way. In the common habit tic nail dystrophy, the cuticle of the thumbnail is the target for picking or rubbing. This repetitive trauma causes a ladder pattern of transverse ridges and grooves to run up the centre of the nail plate (Fig. 13.23).

Lamellar splitting of the distal part of the fingernails, so commonly seen in housewives, has been attributed to repeated wetting and drying (Fig. 13.23).

Attempts to beautify nails can lead to contact allergy. Culprits include the acrylate adhesive used with artificial nails and formaldehyde in nail hardeners. In contrast, contact dermatitis caused by allergens in nail polish itself seldom affects the fingers but presents as small itchy eczematous areas where the nail plates rest against the skin during sleep. The eyelids, face and neck are favourite sites.