The Kantha of Bengal : Method of stitching, Motif 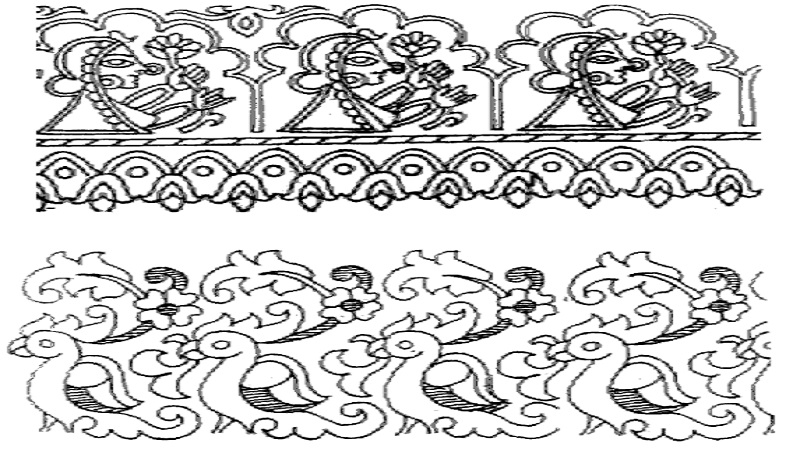 The Kantha of Bengal:

The traditional folk art of Bengal is famous as Kantha, which means 'Patched Cloth' and 'quilting'. The Dacca muslin saris of gray, black or white coloured are used for thin embroidering. The old discarded cotton saris or dhotis are piled up on the top of each other quilted and embroidered.

The size of thickness of Kantha varied according to its type. The layers of pieces are sewn together by simple darning stitch in white thread, drawn from the old sari borders.

The design is first traced and the filling is done by coloured thread, taken from the coloured borders of saris. Lotus is the most common and important motif widely used in Kantha.

Usually satin with tacking is used for this kind of embroidery. Tacking is done to attach layers of fabric together. Work tacking stitch from centre to edge or vice versa.

100 petal lotus is the most common motifs used for kantha. Other than this scenes from day to day life, folk stories, mythological stories are used.

In original kantha both the sides will be identical.

Bayton, a three feet square piece serves as a wrap for books and other similar valuables. It has a central motif, usually the lotus with hundred petals called 'Satadala Padma'. The core has Satadala Padma with two or three borders on the sides. The other motifs commonly seen are water pots conch shells, kalkas, trees, foliages, flowers, birds, elephants, chariot, human figures etc.

Arshilata is used as cover or wrap for mirror, comb and other such toilet articles. It is a narrow rectangular piece of 6' x 12' length. It has a wide border and the central motif is taken from the scenes of Krishna leela. The lotus, trees, creepers, spirals, inverted triangles, zig-zag lines, scrolls are also some of the commonly used motifs.

It is a square piece Kantha of 16' x 16' covers the wallet, has a central lotus motif with an elaborated border. The three corners of this piece are drawn together inward to make the tips to touch at the centre and are sewn together like an envelop. It will have another flap to which a string, tussle or a decorated thread is either stitched or mechanically fixed, which can be wound and tied up when rolled. The other motifs used are various types of foliages, snakes and other objects from the natural surroundings.

It is relatively a thick quilted wrap of 6� feet x 4� feet by more number of sari layers, placed on top of each other to provide warmth during winter season. Simple geometrical designs are worked with running stitch using coloured threads. The entire lep piece is been given a way rippled appearance by working simple embroideries.

Oar (ooar) kantha serves as a pillow cover. It is a rectangular piece whose size is about 2' by 1�'. Usually simple designs like trees, foliages creepers, birds or a liner design with longitudinal border constitutes the ground base and decorative border is stitched around its four sides.

Rumal is nothing but a hand kerchief and is the smallest among all the kanthas. A square piece having a size about one square foot. Lotus is the core and other motifs embroidered around it. Sometimes plant and animal motifs are also embroidered but invariably has a well decorated border.