The preceding sections have described a little of what has been learned from genetic experiments about lambda’s ability to integrate and excise.

The preceding sections have described a little of what has been learned from genetic experiments about lambda’s ability to integrate and excise. One way to study the biochemistry of integration and excision is to construct an in vitro system that mimics the in vivo reaction. The first requirement for integration or excision is to bring the two participating molecules close together. In vivo, this requirement is partially met as a simple consequence of the fact that both DNA molecules are confined to the volume of the cell and therefore are held in close proximity. The in vitro integration or excision reaction should be greatly speeded if thetwo att regions similarly can be forced close to one another. One way to accomplish this is to place both att sites on the same DNA molecule. Then the concentration of one att site in the vicinity of the other is, of necessity, high.

This section describes the isolation and properties of such a double att phage, and the following sections describe its use and the use of asimilar phage to study the integration and excision reactions more deeply both in vivo and in vitro.

Some distance to either side of an integrated lambda are two sites that the host recombination system will recombine at a reasonable frequency. This event excises a phage that has picked up host DNA from both sides of the phage integration site (Fig. 18.8). Ordinarily this event cannot be detected because the resulting DNA is too long to be packaged in a lambda coat, but if several deletions have first been put into lambda, this particular excision product will fit into the head, and viable phage are formed. 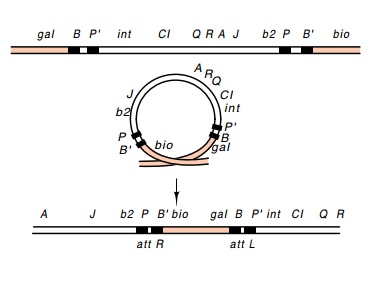 The structure of the phage produced by the recombination between two sites flanking lambda is most interesting. The phage contains two att regions, attL and attR, and is called att2. Such an att2phage can losethe extra bacterial DNA by a reaction analogous to normal excision

This process requires the Int and Xis proteins and produces a viable lambda phage genome and a minicircle (Fig. 18.9).

Study of the excision reaction requires quantitating the input phage λatt2as well as the product phage. Fortunately, the two may be readilydistinguished. The concentrations of λatt2 and the λ generated by excision can be assayed in a mixture of the two by first separating the phage on the basis of density in equilibrium centrifugation. The λatt2 phage is more dense than lambda as a result of its additional DNA.

A simpler assay of the two types of phage makes use of the sensitivity of lambda to heat and chelators of Mg++. Removal of Mg++ ion from the phage reduces the charge neutralization between phosphates of the region and a minicircle. 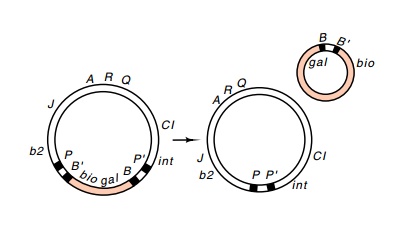 Figure 18.9 An excision re-action between the two attbio      regions onatt2generates a vi-able phage with a single att

DNA backbone, and as a result, the DNA expands and can burst the phage coat. Phage particles possessing less than the usual amount of DNA are more resistant to heating and removal of Mg++. Combinations of Mg++ chelators and elevated temperatures can be found in which wild-type lambda is killed by factors of 103 to 104, but the λb2 deletion mutant is unharmed (Fig. 18.10). The same principle can be used to titer λ in the presence of λatt2. If the mixture is titered on plates containingpyrophosphate, which chelates magnesium, only the λ can proceed through multiple infective cycles and generate plaques. By titering also on normal plates, the total number of both phage types present can be determined since both form plaques. 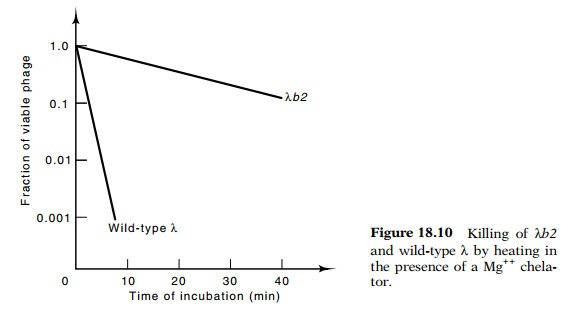