Lambda phage can act as a specialized transducer of certain host genes.

Lambda phage can act as a specialized transducer of certain host genes. This means that each phage particle in some lambda lines carries a host gene in addition to essential phage genes. The host gene on the phage DNA can be brought into an infected cell and either complement a defective copy of a gene in the host or can recombine with the host copy of the gene. The process of carrying the DNA across and incorporating it into the chromosome of the infected cell is called transduction. Because only certain genes can be transduced by lambda, and because each phage particle in a lysate of a transducing phage carries a copy of the host gene, the process is called specialized transduction. Specialized transduction by lambda should be contrasted to generalized transduc-tion by P1 in which only a small fraction of the phage particles contain nonphage DNA, only a small fraction of these contain DNA of any particular bacterial gene, and the DNA in a transducing particle con-tains no phage DNA.

Transducing phage once were necessary for the enrichment and ultimate isolation of regions of DNA involved in regulation of bacterial genes. Also, cells infected with transducing phage often hypersynthesize the proteins they encode owing to the presence of multiple phage genomes during much of the phage growth cycle. Without this gene dosage effect, the proteins could be present in quantities too low for biochemical study. The enormous value of transducing phage in re-search on bacterial gene regulation stimulated efforts to develop genetic engineering techniques so that DNA, proteins, and gene regulation systems from other organisms could also be studied.

Upon induction of a lysogen, most prophage excise uneventfully. At a frequency of 10-5 to 10-7, however, a prophage excises incorrectly from the host chromosome and picks up bacterial DNA bordering the phage integration site. These incorrect excision events produce transducing phage. One of the joys and powers of genetics research is that excep-tionally rare events such as these may be captured and perpetuated for further study. 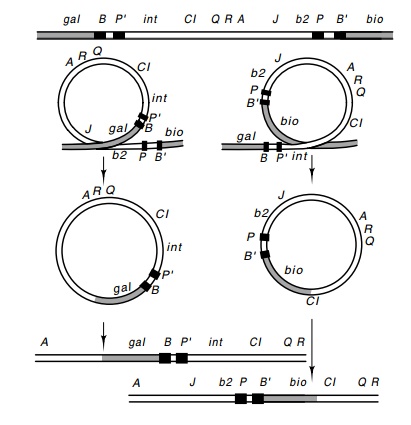 Figure 18.6 Production ofgalandbiotransducing phage by recombinationevents located to the left or to the right of the end of an integrated lambda.

When lambda excises incorrectly from a point other than BOP’ and POB’, bacterial DNA on one side or the other of the integrated lambdaDNA can be picked up by the phage (Fig. 18.6). These incorrect excision events could utilize the int and xis products, but more likely use cellular enzymes that break and rejoin DNA. If the crossover sites are not too far apart for the intervening DNA to fit within the phage head, the resulting DNA can be encapsidated to form a viable phage particle. Usually, for packaging to occur some phage genes must be deleted from the resulting excision product. Looping out to the left produces a phage with gal genes substituting for the b2 region. That is, gal DNA in the phage is flanked on both sides by lambda genes. Also, attL, or BOP’, replaces the normal phage attachment region POP’.

The gal genes are sufficiently far from attλ that phage having picked up gal genes must, of necessity, have left at least the J gene behind in order that the transducing phage genome be small enough to be pack - aged in a lambda coat. These phage are defective because they do not yield viable phage upon infection of cells. They are propagated by coinfecting them with phage that provide their missing J gene product. Such defective gal transducing phage are called λdgal.

Phage that excise the other way pick up the biotin genes. These substitute for the nonessential int, xis, and other early genes under control of pL. Usually these phage are not defective and hence are called λpbiofor their ability to form plaques and transduce biotin genes. Theypossess attR, POB’.