Determination of the lambda prophage gene order in lysogens by deletion mapping exposed an anomaly.

Determination of the lambda prophage gene order in lysogens by deletion mapping exposed an anomaly. The order is a particular circular permutation of the order found by recombination frequencies between genes for vegetatively growing lambda (Fig. 18.3).

On the basis of a small number of genetic experiments Campbell proposed a brilliant explana-tion for the gene order problem and also made several other predictions concerning problems on integration. The Campbell model was that the lambda DNA, which is linear within the virion, circularizes upon enter-ing a cell and then opens its genome at another point as it reciprocally recombines via a site-specific recombination event mediated by a spe-cialized recombination machinery into the chromosome of the host (Fig. 18.4). A simple notation has developed for the DNA elements involved in integration and excision. The region of the host DNA into which lambda inserts is labeled BOB’. B denotes the left portion of the bacterial sequence into which lambda inserts, O is the crossover point or region of the recombination between phage and chromosomal DNA, and B’ is the right portion of the bacterial sequence. The entire region BOB’is called attB. Similarly, the phage regions are called POP’ and attP.The products of integration are BOP’, which is also called attL, and POB’, which is called attR. Note that this notation does not prejudice the discussion by assuming that B and P are homologous or that B is the same as B’. In fact, we can predict that the system would not depend on lengthy homologies between BOB’ and POP’ because if it were, the general recombination system could then recombine to insert or excise a phage genome. 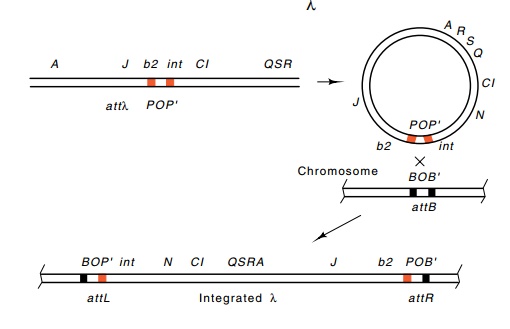 Figure 18.4 The Campbell model for lambda integration. Linear phage DNAcircularizes soon after infection by association of the A and R ends. Integration occurs by means of a site-specific recombination event in the Oregions of the phage and bacterial DNA to generate the integrated phage. P and P’, and B and B’ are the phage and bacterial DNA sequences required for this process.