The integration-excision reaction of phage lambda could proceed by concerted double-stranded cleavages of both of the parental molecules.

The integration-excision reaction of phage lambda could proceed by concerted double-stranded cleavages of both of the parental molecules. Alternatively, one strand from each parental molecule could be cut and exchanged, then the strand exchange point could be shifted by seven base pairs to the location of the exchange for the other DNA strand. This type of shifting is called branch migration, and normally it costs little or no energy since for each base pair whose hydrogen bonds are broken, a new hydrogen bonded base pair is formed (Fig. 18.21). The second alternative is similar to the pathway for general recombination that utilizes a Holliday structure and was discussed earlier. Several lines of evidence lead to the conclusion that it is the second pathway that is followed.

The first evidence favoring utilization of a Holliday structure is the experimental finding that Int protein will catalyze the conversion of an artificially constructed att site Holliday structure to the products ex-pected from a complete integration reaction. Part of the interest in this important result is the trick used to generate the substrate DNA. Restric-tion enzyme fragments containing the four types of att sites were denatured and reannealed. In addition to regenerating the original duplexes, cross hybridization creates a Holliday-type “chi” structure (Fig. 18.22). Int protein can cleave this to generate the expected products. 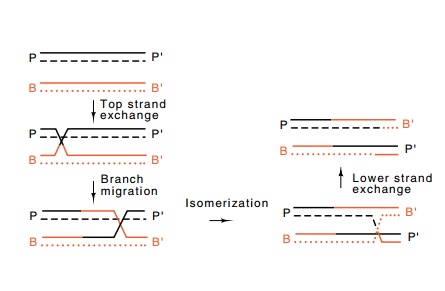 A second line of experiments also leads to the conclusion that the integration reaction proceeds in discrete cutting steps. In this experi-ment an attP site on a supercoiled circle is reacted with a linear attB site. If the integration reaction is permitted to proceed to completion, a long linear product results. If, however, the reaction is stopped early, then the “alpha” structures sketched in Fig. 18.23 are formed. These could form only if a single strand is cut and exchanged. By these means one has an assay for completion of only the first strand exchange, or both strand exchanges.

The first cut occurs in the upper strand at the left end of the seven base cohesive region. Placing a nick at this site in the DNA substrate could deprive Int of the energy from the phosphodiester bond. Indeed, such a nick blocks initiation of the integration reaction. The next step in the reaction is the branch migration or branch displacement that shifts the strand crossover point seven base pairs to the right. Genetic

Figure 18.23 The integration reaction between a supercoiled PP’site and alinear BB’ site will generate first the "alpha" structure after one strand has exchanged, and then the linear structure after both strands have exchanged.

experiments showed that mispaired bases in the central region greatly reduced the rate of strand exchange. Similar experiments done in vitro, or crosslinking from one DNA strand to the other in this region similarly block completion of the exchange reaction. Finally, placing a nick at the site of the lower strand crossover point blocks completion of the reaction.