One approach to the study of the integration and excision reactions is to determine where purified Int, Xis, FIS, and IHF proteins bind in the att regions.

One approach to the study of the integration and excision reactions is to determine where purified Int, Xis, FIS, and IHF proteins bind in the att regions. The proteins have a complex binding pattern in attP (Fig.18.18). Int protein binds to seven sites in attP: two in the common core, two on the P arm, and three on the P’ arm. Interestingly, the core sequences for Int protein binding are different from the arm sequences. Not surprisingly then, Int protein possesses two domains, an N-terminal domain which binds the arm sequences and the C-terminal domain, which binds the core sequence at the crossover point. IHF binds to three sites, Xis protein binds to two sites, and FIS binds to one site partially overlapping an Xis site. Together these binding sites cover the entire region from -150 to +100 with respect to the center of the common core.

Several facts suggest that the protein-attP complex is folded rather than being extended in a line. When the complex of the various att regions and the Int, Xis, FIS, and IHF proteins is examined in the electron microscope, a compact and topologically complicated struc-ture is seen. This would make us fear that it could be an artifact except that a complex of Int plus Xis proteins bound at attR appears to pair specifically with a similar complex formed at attL on a different DNA molecule. Since the bacteria and phage att regions possess no sequence homology except for their common core sequences, either it is the bound proteins or it is recombined DNA that holds the pair of DNA 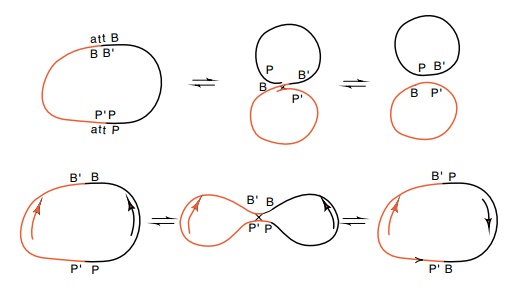 Figure 18.19 An integrative reaction between thePP’andBB’sites in oppositeorientations on two different plasmids either generates two smaller circles, or it inverts one of the segments between the sites with respect to the other site.

molecules together. The attB site with which attP interacts is much more compact, possessing only the two core binding sites of Int protein. The attB site probably does not bind Int protein by itself under normalphysiological conditions, but the bare DNA merely collides with the intasome complex at attP and the strand exchange process then begins.

One way to estimate the shape of attP might be to consider the bending in the DNA that is generated by each of the proteins which bind in the region. Another approach for learning about the structure of the intasome is to examine the topology of the DNA that engages in recom-bination. Consider the crossover reaction when performed on a small circular plasmid lacking supercoiled turns. When the att sites are in one orientation, the crossover reaction generates two smaller circles from the original, but when one of the att sites is reversed, the product of a crossover reaction does not generate two circles (Fig. 18.19). Instead, the segment of DNA between the sites is reversed in orientation. Further, depending on the topology of the DNA at the time of the crossover, either a simple circle or a knotted product called a trefoil is generated (Fig. 18.20). When one of the att sites participating in the crossover reaction is wrapped around a core of proteins as indicated, a superhelical turn is generated. This can be trapped in the reaction so that the product is a trefoil rather than a simple circle.

Nash and colleagues found two important results when examining the products of Int protein-catalyzed segment reversal. First, that half the products were trefoils, and second, that all the trefoils were topologi-cally identical, that is, they possessed crossover points of the same sense. The presence of only one kind of crossover points or nodes in the trefoils means that the polarities of the wrapping in all the original PP’ sites 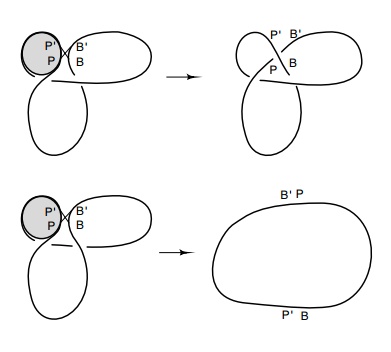 Figure 18.20 An integrativereaction between POP’ sites wrapped around a protein and BOB’ sites on a circle can generate a trefoil if the DNA strand is trapped by the reac-tion and if the correct strand, in this case the P’B product, is placed above the PB’ prod-uct.

were the same. Had any been wrapped the other way any resultant trefoils would have possessed nodes of the opposite topological sign and would be the mirror image of the one shown. Second, the fact that the fraction of trefoils was as large as one half means that almost all of the attP substrate was wrapped around protein at the time of recombination.