Structure of the att Regions

Historically the ability to sequence DNA came after geneticists had isolated the att mutants and had determined much about the integration and excision reactions.

Structure of the att Regions

Historically the ability to sequence DNA came after geneticists had isolated the att mutants and had determined much about the integration and excision reactions.

Figure 18.16 Theattregions andnucleotide sequence of the O region of att.

Therefore, obtaining the sequence of att would permit checking the genetic inferences. Sequencing the att region was straightforward because phage carrying the four possible att regions— POP’, BOB’, BOP’, and POB’—were available. Landy identified the ap-propriate restriction fragments from these phage, isolated and sequenced them. As expected from the genetic experiments, all four contained an identical central or core sequence corresponding to the O part of the att region. The size of the core could not have been deter-mined from the genetic experiments, but it turned out to be 15 base pairs long (Fig. 18.16).

The recognition regions flanking the cores are of different lengths. By deletion analysis, the sequences on either side of O at the bacterial att region that are necessary for integration have been shown to be justlarge enough to specify an Int protein binding site. By contrast, attP is about 250 base pairs long.

The sites of Int-promoted cleavage of the O sites have been deter-mined exactly using radioactive phosphate both as a label and as an agent to cleave the DNA. An in vitro integration reaction was performed between an attP and a short DNA fragment containing attB that had 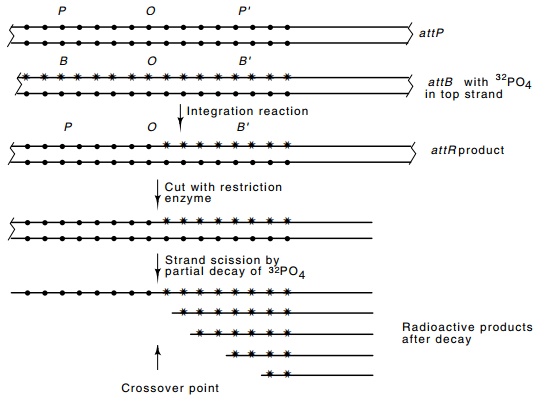 been extensively labeled with radioactive phosphate on one and then the other strand. This generated attL and attR sites. In the attR site, all phosphates that lie to the right of the crossover point derive from attB and are therefore both radioactive and subject to strand scission by radioactive decay. The positions of these radioactive phosphates were then determined by permitting some to decay. The decay event cleaves the phosphate backbones; subsequent electrophoresis of the denatured fragments on a sequencing gel yields bands corresponding to each position that had a radioactive phosphate and no bands of other sizes (Fig. 18.17). The exchange points are deduced to be at fixed positions on the top and bottom strands, but separated by seven base pairs.