Inhibition By a Downstream Element

A lambda phage not integrated into the host chromosome and proceed-ing down the lytic pathway would do well to minimize its synthesis of Int protein.

Inhibition By a Downstream Element

A lambda phage not integrated into the host chromosome and proceed-ing down the lytic pathway would do well to minimize its synthesis of Int protein. On the other hand, an induced lambda located in the chromosome has great need for Int protein to assist in excision. How could the phage know whether or not it is integrated into the chromo-some and how could it therefore adjust Int protein synthesis? In both situations, the int-specific promoter pI is off and the synthesis and regulation of Int and Xis proteins derives from the pL promoter. 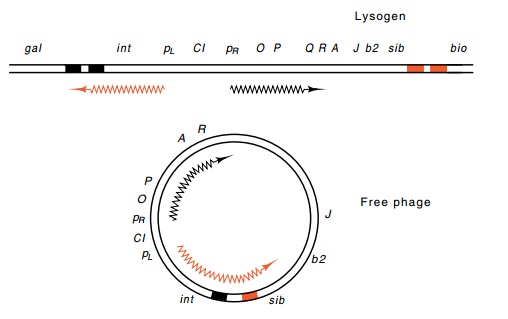 The synthesis of Int and Xis proteins was characterized in cells that had been exposed with a low dose of UV light to block host-encoded protein synthesis. These cells were then infected with phage, and radio-active amino acids were added. At various times, samples were taken and subjected to SDS polyacrylamide gel electrophoresis. The Int and Xis proteins were easily detected and quantitated by autoradiography. Alternatively, no UV light was used, and instead the Int or Xis proteins were precipitated with antibody, further separated from the other proteins by the electrophoresis, and finally quantitated from autora-diographs.

The sib region contains a typical transcription termination sequence, and the sib mutations alter the structure of the RNAse III-sensitive structure that can be formed in messenger that initiates from pL (Fig. 18.13). Transcripts initiated at pI normally terminate near the end of this region, but the transcripts initiated at pL ignore termination signals because of the phage N protein bound to RNA polymerase, and the

Figure 18.13 Secondary structures of thesibregion in transcripts originatingfrom pI and pL. The promoter pI lies just ahead of xis, so the transcription start point does not include all of xis.

transcription continues past this region. The pL-initiated transcripts are capable of forming an additional base-paired region that is sensitive to RNAse III. This enzyme that cleaves special double-stranded RNA structures. The transcripts initiated at pI do not form the RNAse III-sen-sitive structure. Most likely, then, cleavage by RNAse III leads to degra-dation of the adjacent int gene messenger. As expected, the sib effect is absent in RNAse III-defective mutants.