The cardiac cycle can be defined by both electrical and mechanical events.

The cardiac cycle can be defined by both electrical and mechanical events ( Figure 20–2). Systole refers to contraction and diastole refers to relaxation. Most  diastolic ventricular filling occurs passively before atrial contraction. Contraction of the atria normally contributes 20% to 30% of ventricular filling. Threewaves can generally be identified on atrial pres-sure tracings (Figure 20–2). Theawave is due to 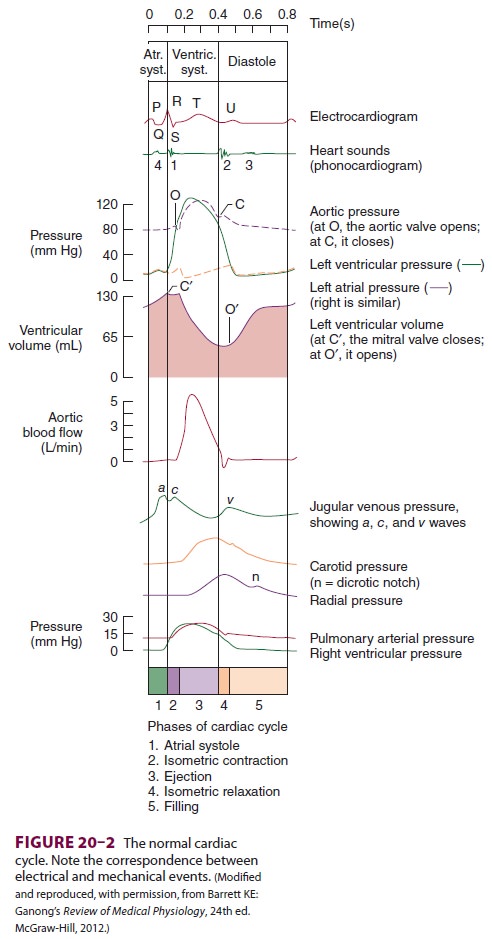 atrial systole. The c wave coincides with ventricular contraction and is said to be caused by bulging of the AV valve into the atrium. The v wave is the result of pressure buildup from venous return before the AV valve opens again. The x descent is the decline in pressure between the c and v waves and is thought to be due to a pulling down of the atrium by ventricular contraction. Incompetence of the AV valve on either side of the heart abolishes the x descent on that side, resulting in a prominent cv wave. The y descent fol-lows the v wave and represents the decline in atrial pressure as the AV valve opens. The notch in the aor-tic pressure tracing is referred to as the incisura and is said to represent the brief pressure change from transient backflow of blood into the lef t ventricle just before aortic valve closure.