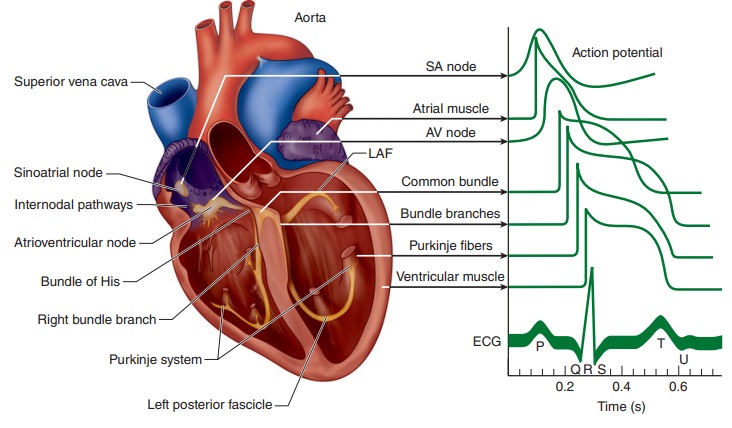 At rest, the myocardial cell membrane is nominally permeable to K+, but is relatively impermeable to Na+.

At rest, the myocardial cell membrane is nominally permeable to K+, but is relatively impermeable to Na+. A membrane-bound Na+–K+-adenosine tri-phosphatase (ATPase) concentrates K + intracellu-larly in exchange for extrusion of Na+ out of the cell. Intracellular Na+ concentration is kept low, whereas intracellular K + concentration is kept high relative to the extracellular space. The relative impermeability of the membrane to calcium also maintains a high extracellular to cytoplasmic calcium gradient. Movement of K+ out of the cell and down its con-centration gradient results in a net loss of positive charges from inside the cell. An electrical poten-tial is established across the cell membrane, with the inside of the cell negative with respect to the extracellular environment, because anions do not accompany K+. Thus, the resting membrane poten-tial represents the balance between two opposing forces: the movement of K+ down its concentration gradient and the electrical attraction of the nega-tively charged intracellular space for the positively charged potassium ions. 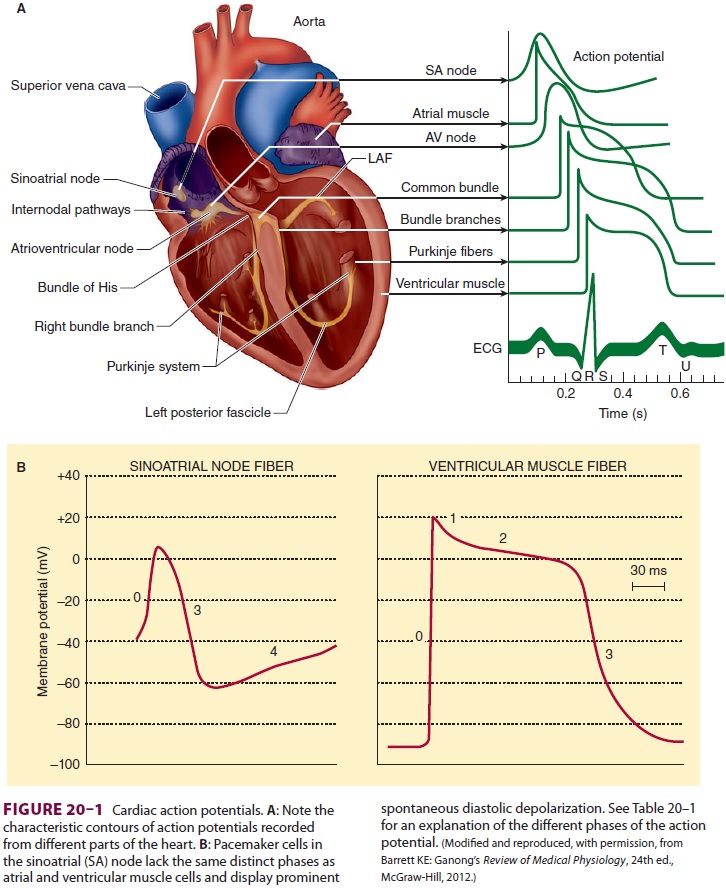 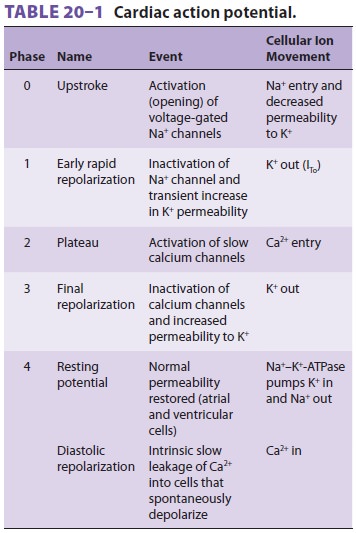 Following depolarization, the cells are typically refractory to subsequent normal depolarizing stim-uli until “phase 4.” The effective refractory period is the minimum interval between two depolarizing impulses that will propagate. In fast-conducting myocardial cells, this period is generally closely cor-related with the duration of the action potential. In contrast, the effective refractory period in more slowly conducting myocardial cells can outlast the duration of the action potential. Table 20–2 lists some of the multiple types ofion channels in cardiac muscle membrane. Some are activated by a change in cell membrane voltage, whereas others open only when bound by ligands. T-type (transient) voltage-gated calcium channels play a role in phase 0 of depolarization. During the plateau phase (phase 2), Ca2+ inflow occurs through slow L-type (long-lasting), voltage-gated calcium channels. Three major types of potassium channels are responsible for repolarization. The first results in a transient outward K + current (ITo), the second is responsible for a short rectifying current (IKr), and the third produces a slowly acting rectifying current (IKs) that helps to restore the cell membrane poten-tial to its resting value. 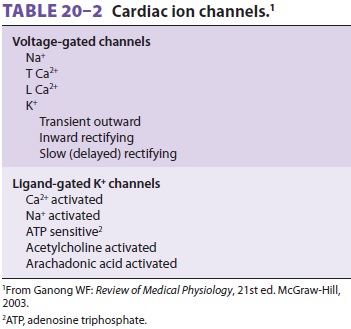